Recently I attended a screening at the Film Society of Lincoln Center of Appropriate Behavior, a romantic comedy set in Brooklyn about hipsters. Shirin is an Iranian-American bisexual obsessing about Maxine, her cool butch lesbian ex-girlfriend, following their crash and burn breakup. The story time travels back and forth when they were happily together in the recent past with newly single Shirin disastrously coping in her miserable present. My expectations for this film hovered at the bottom of the ocean. Much to my surprise, I found this briskly paced debut feature by screenwriter-director-star, Desiree Akhavan, who plays Shirin, entertaining. It’s witty, she’s pretty and this edgy tale is packed with sex, angst and colorful glimpses into Iranian American culture and customs.

Something I wasn’t wild about was The Knuckle Dragger who stood directly in front of me completely blocking my view after the film ended, just as the q&a was about to start. Eventually, Lurch realized that they had more in common with a door than a window. Often, I find the questions asked in film screening q&a’s painfully stupid. For example:

Audience Member: How many of you [actors] were playing yourself?

Did this person think that Akhavan had directed a documentary?

Akhavan, who has extensively screened her film on the festival circuit, was an admirable pro fielding such an idiotic question that drew audience gasps or maybe I was just hearing the sound of my own less than silent GERD. I later realized that it could be interpreted as a backhanded compliment. Akhavan did a commendable job directing her actors who were very well cast. She and Rebecca Henderson, who plays Maxine, had palpable chemistry.

Akhavan has been referred to as “the Persian Lena Dunham”. Dunham is a major player in the zeitgeist and no doubt Akhavan would love to follow that “it” girl’s influential lead. The comparisons are obvious: Akhavan has screen presence, a clever way with words and she is very comfortable both behind and in front of the camera. For the fourth and current season of Girls, Dunham has written Akhavan into her hit series. That strikes me as a vote of confidence from Dunham to Akhavan.

During the q&a Akhavan admitted that her screenplay was influenced by Woody Allen’s Annie Hall. In lieu of revealing any spoilers, I detected some homage to Mike Nichols’ The Graduate. Appropriate Behavior also brought to mind an early Ang Lee film, The Wedding Banquet, a romantic comedy about an Asian American son’s anxiety over admitting that he is gay to his immigrant parents. Shirin is in the closet to her parents. The stress to come out contributes to her neurosis and adds to her problems with Maxine. Akhavan is blatantly and subtly borrowing from some of the best veteran filmmakers, but I also recognized a unique voice and perspective that is her own. I look forward to seeing what she directs next. 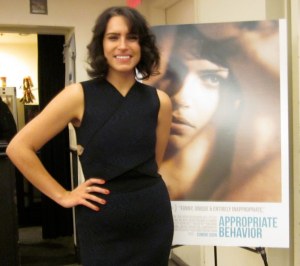 Desiree Akhavan – you go girl! (Dress from Opening Ceremony for those into knowing that sort of thing).

The most wonderful time of the year.

Milton and I have been going to the New York Film Festival. Thus far, we have attended four screenings, but he recently rubbernecked the red carpet arrivals without me. He took this gotcha shot of Robert Redford entering a screening of All is Lost.

“Get that iPhone out of my face.”

Our selections span the globe provided you are only traveling to China and France. Milton was very eager to see Jia Zhangke’s A Touch of Sin. For weeks he talked avidly about this film. He urged me not to read anything about it so I would view it with a completely open mind. I heeded his advice. Finally, the night of the screening arrives. Milton mentions for the 127th time that he’s very excited. The program begins. Out steps the moderator, Amy Taubin. Cue downbeat.

Milton (loud whisper): I hate her!

Me (barely audible whisper): No, it’s Annette Michelson that you hate. She’s the one that burped into the microphone that year.

Milton (insistent whisper): I hate her, too, and I hate this one! She was a second rate critic at the Village Voice and now she’s here!

Milton emits a groan of disgust normally reserved for seeing a rat the size of a toaster scampering across the subway platform. Fortunately, the film, four loosely interconnected stories about members of the working class in modern day China who grow increasingly enraged by the economic divide and react memorably, was riveting. Milton was so impressed he intends to see it again. We left craving noodles, but settled for nachos.

Center, Jia Zhangke with his lead actress and his wife, Tao Zhao. Amy Taubin at right. Translator at left.

Next, we made our way to France when we saw The Stranger by the Lake, a thriller about gay male cruising that was shot entirely outdoors by a lake. It was written and directed by Alain Guiraudie and had a distinct Hitchcockian feel if Sir Alfred had ever been inclined to shoot a film showing hardcore sex between guys. The NYFF had disclaimers all over the place warning: Please be advised that this film has scenes of a sexually explicit nature. That evening’s Milton-approved moderator, Dennis Lim, again reminded the audience comprised of approximately 98% gay men, about this fact. The guys applauded and cheered the announcement.

Stranger delivered on many levels, and I agree with Dennis Lim that it’s a film about watching. All eyes were glued to the hyper masculine character Michel. Michel reminded me of Mark Spitz. Milton said Michel reminded him of every gay male porn film icon of the Seventies and Eighties. Stranger was highly entertaining until the last twenty minutes when it veered in a direction we wish it had not and no, I’m not saying that Michel announces that he’s straight and has decided to marry his long lost love, Mary Ellen Flaubert. We just wished it had gone in a different direction. A chatty chap sitting behind us kept referring to the protagonist, Franck, as “a ninny”; an opinion Milton found immensely irritating.

Over the weekend, we were joined by our friend, Lola, for a double header. First, we saw the latest from filmmaker, Catherine Breillat, Abuse of Weakness, starring screen legend, Isabelle Huppert. This is a drama based on true events in Breillat’s life after she suffered a severe stroke and when she had a relationship with a notorious conman who milked her for hundreds of thousands of Euros. Again, the moderator was Amy Taubin, but Milton practiced restraint and simply glowered at her. Huppert, now age 60, looks luminescent. She personifies that je ne sais quoi factor French women exude. I whispered to Milton:

Me: I’ve seen Isabelle Huppert in person. I can die happy! 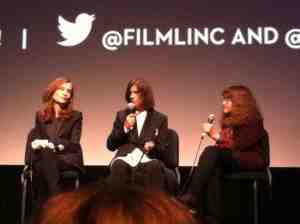 Milton smiled warmly; he was thrilled to see her, too. About the film … did it suck! Behold, Milton’s two word review:

Milton was livid that Maud, Huppert’s stroke victim character, would be eating prosciutto after a stroke.

Milton: Who the hell does that? That’s like eating straight salt!

The only way Huppert could have saved this story might have been if she uttered the French word for “rewrite”. What impressed Lola about it was a question an irate audience member sitting in the balcony bellowed during the q&a.

Irate Audience Member: Why can’t the French have subtitles in yellow? Why does it always have to be white on white? I can’t read that!

Next we saw an infinitely more engrossing film, a meticulously crafted and very clever thriller directed by Claire Denis appropriately titled Bastards. She unfolded the story in fragments. The audience never knows more than Marco the protagonist who we’re rooting for to solve the mystery about what happened to his niece. This is a film that requires full attention. When the guy sitting next to me suddenly got the hiccups that was briefly distracting, but I maintained focus.

This time the moderator was Kent Jones, the Director of Programming, and a serious Claire Denis cheerleader. Bastards was pure cinema. Milton had no complaints. 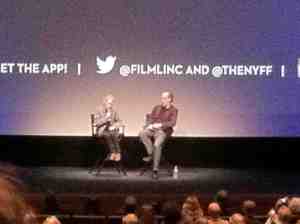 Responding to my SOS text, Lola takes this shot of Claire and Kent from her third row seat.