Lame Adventure 351: The Booze, the Dames, the Hair Plugs

With all the gassing about today being twelve-twelve-twelve, click here for a story the New York Times published about a baby born in Gotham City at precisely twelve minutes after twelve noon, I have the Chairman of the Board, the Voice, Ol’ Blue Eyes, Frankie on my mind.  Had he not checked into the Big Nightclub in the Sky in 1998, Frank Sinatra would have turned 97 today.  I cannot say that I know many dames that are fans of Frank aside from my ex, Rockets Redglare, who loved Frank’s rendition of Luck Be a Lady from the musical Guys and Dolls.  Rockets donning her Sigmund Freud chapeau analyzed how Frank sang the lyric:

Frank: A lady doesn’t wander all over the room and blow on some other guy’s dice!

Another dame that remembers Frank fondly is his third ex-wife, Mia Farrow.  He married her when she was twentyone, he was fifty and suffering a pronounced midlife crisis.  Decades after their divorce, at the time that she and her former companion, Woody Allen, had their spectacular falling out, Frank gallantly offered to have Woody’s legs broken.  And to think, towards the end of my favorite Woody Allen film, Manhattan, Woody’s protagonist, Ike, is lying on a couch talking into a tape recorder about all the things that make life worthwhile, he mentions Frank.

Frank was extremely moody and he referred to himself as “an 18-karet manic depressive”.   His youngest child, Tina, wrote in her memoirs about her father, “… I believe that a Zoloft a day might have kept his demons away.  But that kind of medicine was decades off.”

In the early fifties Frank’s career hit the skids and for a while, it looked like he might be washed up.  His fan base, the bobby-soxers, had replaced him with Eddie Fisher.  Frank, although married with three kids, was wildly unfaithful and then he fell hard for screen siren Ava Gardner when she was at the top of her game in Hollywood.  After his divorce, their volatile affair segued into a disastrous marriage, but by all accounts she was the great love of his life.  He kept a statue of her from the film, The Barefoot Contessa, in his back yard until Barbara Marx, his fourth and last wife, forced him to get rid if it.  My gut feeling tells me that she was not nearly as much fun as Ava.

Recently, I was visiting my pal and dedicated Frank-o-phile, Martini Max in Fort Lee, New Jersey.  Max wanted to take a hike in the Palisades behind the George Washington Bridge.   I now have a pretty bum left knee, but since it was late fall, I resisted whining and didn’t even suggest that we were likely targets for deer ticks and debilitating Lyme disease. So, off we went.

Our hike started with a climb up this staircase that took us into the woods.

Not as daunting as it looked to my knee.

We encountered some fallen trees that Max said survived Hurricane Sandy, but fell following the Nor’Easter that smacked the Northeast afterward.  There is only so much torture trees can withstand. 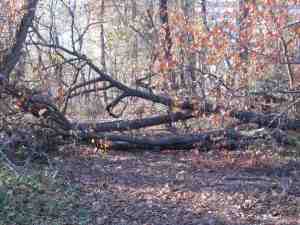 Another victim of climate change.

Then, we marveled at the George Washington Bridge. 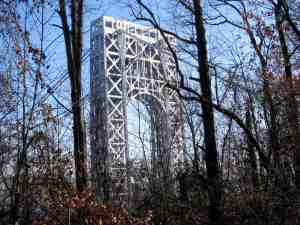 George Washington Bridge on the Jersey side.

Max:  Thank God those idiots didn’t cover it in concrete.

Apparently, when the bridge was under construction planners had considered encasing it in cement.  After showing our respects to the GWB, we traveled on a path until we reached The Spot. 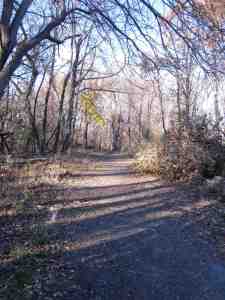 Me:  How the hell do you know?  It was demolished before you were even born!

Seriously, what are we even looking at?

Max pointed downward at a surviving bit of sidewalk in these woods.  Never argue with a Jersey guy that knows his Jersey lore forwards and back. 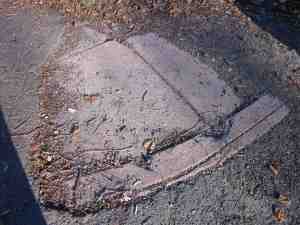 And imagine back in the day, in the forties and fifties, in this same space it was this. 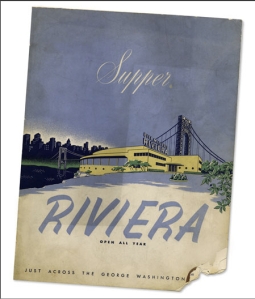 Bill Miller’s Riviera was a bit of Las Vegas-style swank, but pre-Las Vegas, situated in the foothills of Fort Lee.  The Riviera attracted top entertainers of the era as both performers and guests, and those visitors included Frank and Ava.  Frank also performed at the Riviera in 1953 when he had his career comeback.  1953 was also the year that Bill Miller was bought out and the Riviera closed to make way for the Palisades Interstate Parkway.  The Riviera was demolished a year later.

Looking out at the clearing where this legendary nightclub once stood one can only imagine what it must have been like.

One can only imagine …

Then, we noticed a deer in the brambles looking at us.

You’re watching me. I’m watching you.

Me:  For all we know, Max, that deer is the reincarnation of Frank.

Max:  You think we’re looking at Sinatra the deer?

The deer looked straight at us and said:

Sinatra the deer: Do be do be do.

Then, it scampered away.