I returned to New York from my holiday getaway in the San Francisco Bay Area on the red eye Friday morning.  Lack of sleep and total body pain that I self diagnosed as arthritis in my left knee, a pulled muscle in my right arm, and a slight headache combined with general suffering, a.k.a. the predominant ingredient in my charm, rendered me useless for the entirety of my first day back in the Apple.  I’d like to say that I slept dreamlessly, but it’s possible that I was merely hallucinating for twelve hours about lying motionless in a full body splint.  Before losing consciousness I did manage to run a few errands including shopping at my neighborhood market, Fairway.  I knew I was officially home when I approached the green bean stand.  Just as I was about to select my beans, a woman yammering on her iPhone placed her coffee cup over them.

The Yammerer responded with a line of classic New York City verse:

The weather forecast for today is two to four inches of snow.  The New York Times published on their Cityroom Blog a post with a headline proclaiming, “Tomorrow, It Will Snow, Perfectly”.  Andy Newman wrote:

“The ideal city snowstorm, meteorological Platonists say, blankets the landscape without burying it, beautifies but does not burden, transforms and cocoons without paralyzing or even particularly inconveniencing.

Such an event is expected to come our way on Saturday.”

Tomorrow is now today, Saturday.  I’m not a “meteorological Platonist” – whatever the hell that is, but I can say with authority that it’s been a steady mix of slushy flakes and cold rain.  This scene surely would have made the Currier and Ives circular file.

I woke remembering that yesterday I had forgotten to pay a bill for my final blood test of the year.  If my memory is still as sharp as melted butter, that test was to determine that it’s more than ice water and soot flowing through my veins.  I used my last Forever stamp on the payment envelope and decided to trek through the icy slop to Ansonia Station, my local post office here on the Upper West Side, to both mail the aforementioned payment and to replenish my Forever stamps.

There was only one customer in line, a guy that had entered a nano-second before me.  Three postal clerks were servicing other customers, but a fourth was free so she called the guy over.  Now it was just me waiting.  Within seconds, a customer at the window nearest to where I was standing finished and walked away.  The clerk looked right at me.  I looked at her hopeful, and flashed a friendly California-style smile anticipating her to say, “Next.”  Instead, she walked away.  I looked at my watch and realized that I am such a knucklehead.  Obviously the time had come for her to take her one forty-three in the afternoon break.  I waited and waited.  All of the customers at the windows were like barnacles.  Finally, a clerk beckoned.  Now about ten people were waiting behind me in line.  I told the clerk that I would like twenty Forever stamps:

Me:  Do you have any with pictures other than the flag?

She took out a booklet of holiday stamps decorated with Christmas trees.

Me: Do you have anything else?

She looked at me as if I had asked her to give me a kidney.  She snarled in my face:

Postal Clerk:  Look over there.

She gestured to her left, my right.  Under a glass covering a station over from hers was an assortment of Forever stamp designs.

Me:  Am I going to lose my place as I look for my stamp?

She did not acknowledge my question, possibly because hostility is so energy depleting.  I figured she’d grant me a three count to settle on a stamp so I looked at the display at warp-speed.  A series tailor-made for me called “Great Film Directors” caught my eye. 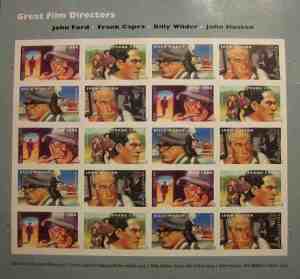 I resisted asking if I could have all Billy Wilder since he’s one of my all-time favorite filmmakers.

I returned to the angry clerk’s window and told her what I had selected.  She said nothing.  She walked away as if she had boulders strapped on each ankle.  Her destination was a closed box that holds the picture stamps.  She returned with my sheet of Great Film Directors and announced:

I handed her a twenty.  She gave me my change.  Eleven singles.

She gave me the stink eye.  I added:

It’s great to be home.