Possibly I’m deluding myself, but I like to think that I’m not too squeamish nor am I a wimp.  I will admit that I don’t do well with the dead.  Residing anywhere for any length of time one will encounter road kill.  That’s a fact of life.  Here in New York, the unpleasant sight of a flattened pigeon or rodent is common. 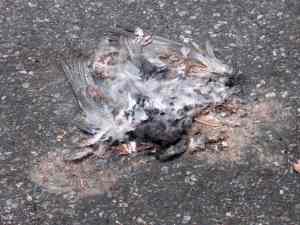 Whenever I encounter the downside of nature, I make a mental note of where not to look and what street I will side step for the next few days.  Every time I do stumble upon some creature’s untimely demise, it is always a bit jarring to me.  I am never truly relaxed when I glimpse a mangled form of what was once very likely earlier that same day a living critter.  This does not imply that for the rest of that day that image will haunt me.  It is an isolated shock in the moment, but then I move on, forget about it and resume whatever it is I am doing.  I don’t dwell on the frozen lifeless cat put out with the trash.  Okay, that dead cat I saw nearly twenty years ago was exceptional.  It has remained stored in my memory bank  forever, but usually, I delete these images almost as quickly as I see them, unless, of course I photograph them.  Hey, you never know when you might need a picture of pigeon splat.

On a recent rainy afternoon I had to run an errand near my office in Tribeca.  Sheltered under my umbrella, I was moving at a brisk pace, focused on getting to where I was going when my eye caught that simultaneously familiar and shocking sight of a limp heap lying atop the corner of a tree planter.  I thought the usual:

Then, I did the usual.  I looked away and walked past.  I assumed it was a dead blackbird, similar to the kind of bird featured in Alfred Hitchcock’s film, The Birds.  As I raced away, I was uncharacteristically still thinking about that bird.  I felt disturbed.  Birds do not normally drop dead atop tree planters.  Some cruel creep had to have harmed that poor defenseless creature.  I felt outrage.  I wondered:

Me: Was it poisoned or shot?

Scene of the crime.

People, their inhumanity and their lack of respect for the living infuriate me.  I write a blog, I have a voice, and on a good day I have seven readers (if my friends and sister check in).  I am obligated to be a spokeswoman about this sort of mindless animal cruelty.  Therefore, I reversed course and marched back to that tree planter, if only to show my compassion for …

A glove with a soggy, furry cuff that a considerate soul in a random act of kindness placed here.

Maybe there is a shred of hope for the human race after all.  It might also behoove me to get my eyes examined.