This iPhone 4S ad is on the back cover of the February 27th issue of The New Yorker, the current issue.

Foggy from over here.

I stared at the copy for a full ten-count partly because I was confused and partly because I had nothing better to do with my time than to blow it looking vacantly at magazine ads.  Amazingly, I was not at work where I perform the lion’s share of my mindless time wasting.  In fact, I was home; I had just eaten dinner followed with a bout of food coma where (hide the small-fry from the sensual image to follow) I passed out with my drooling face pressed into this ad.  Thanks to my buzz saw style of snoring, I eventually revived.

The contraction “What’s” is what baffled me.  I knew the question this iPhone 4S user was asking was not, “What is my day look like?”  Unless they’re so addicted to the name of that American treasure, the I Can Has Cheezburger site, they’re suffering permanent English impairment.

For a moment, it occurred to me that this particular iPhone 4S user could be someone that speaks English as a second language.  My pal Coco has a friend with a heavy European accent.  When he first got his iPhone 4S he dictated an email to Siri intended for Coco.  Siri could not understand his accent at all, so she guessed at what he was trying to say.  Siri also omitted punctuation.  When Coco received his email, she thought he had suffered a stroke.  Yet, there is nothing else in this ad that indicates that this iPhone 4S user is not an ordinary English speaker, but why did they speak such lousy English?  Or, did they?

This prompted me to do a Google search that took me to a site called “Your Dictionary”.  This site insists it’s, “The dictionary you can understand.”  Clearly, they don’t know me.  Your Dictionary made a valiant attempt to set me straight: 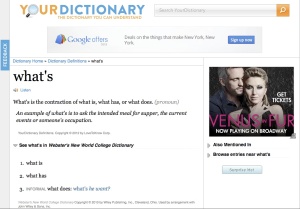 So, this iPhone 4S Bozo or Bozo-ette (the hand looks female and I have yet to meet a guy named Karen) is asking, “What does my day look like?”  That copy I would not have questioned, but that’s not the copy in this ad.  Personally, I would have preferred if the copy read, “What’s my day looking like?”  Unfortunately, no one on the creative team thought to consult me, and The New Yorker does not have editorial control over crappy copy in Apple ads.  If I could afford an iPhone 4S and I had the audacity to ask it a question about the course of my day, I’m sure Siri would drop the cheery-talk with me and cut to the chase.  She’d blurt in a voice that sounds hauntingly like my perpetually angry fifth grade math teacher, Mrs. Flackenhag:

Okay, so I’m amongst the select breed of minimalists that still uses a mute dumb phone, and I also happen to make my toast by drying slices of bread in the sun, but stuff it with the fancy schmancy-ness, Siri.  Your ad’s crummy copy started this!