In a futile attempt to escape the steam bath conditions currently smothering the Big Apple, I was walking down my Upper West Side block on the shady side of the street where it was easily two degrees cooler.  As I passed a garden in a co-op building opposite my humble brownstone, I noticed a sign planted in the foliage extolling we’re number one style bragging rights.  This garden had been honored with a block beautification award by the block association. 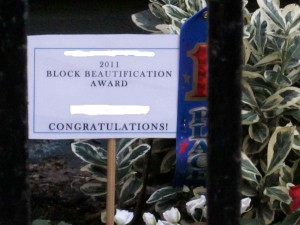 After looking at the sign, I took a longer look at the victory garden. 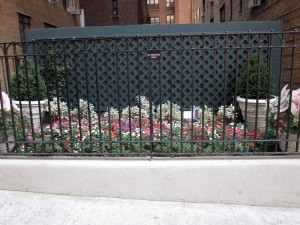 It looked cheesy to me with the four cement urns better suited for a cemetery, but possibly this plot also serves as the burial spot for a rich tenant’s cat, Four-paws. Then I wondered

Me:  Am I being snarky about this because I’m baking inside my skin right now, or is it because my building’s garden lost?

I crossed the street and inspected my building’s losing garden. 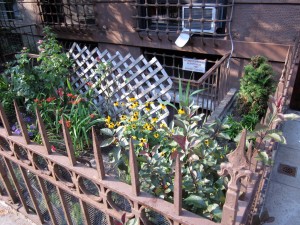 Granted, it’s looking pretty droopy these days, but it is boiling outside.  I’m not trying to make excuses, although the entire city is approximately ten degrees hotter than the basement in Hell right now.  Coincidentally, the architect for that basement is also the sadistic mastermind behind every underground subway platform in Gotham.  His primary source of inspiration was his oven’s broiler.  But I digress … When the rose bushes bloom in my building’s garden, they can look rather lovely.

I wondered if my building even competed in this contest?  Did we win second or third prize and were so offended we didn’t win first that we acted like sore losers and didn’t plant our sign?  Or, were we shunned because of that semi-toasted lump of green pine in the back right corner?

Can someone bring the sunblock over here?

This semi-toasted lump of green pine was my building’s Christmas tree circa 2009.  Back then it was a spindly pile of needles and twigs sitting on the radiator cover in the vestibule.  It was nearly overcome with the weight of ornaments and tinsel.  Milton called it the Charlie Brown tree but he also thought it was adorable.  When the holidays were over, the people that manage my building planted it in the garden.  It’s proven to be a hardy little tree, having survived its second winter, and now it’s weathering its second summer. 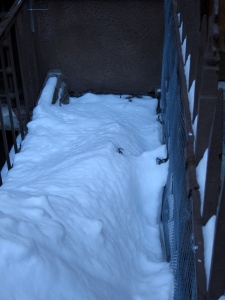 Buried in a January blizzard. 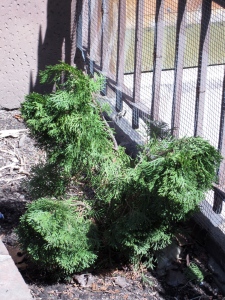 This has prompted me to predict that in about fifty to a hundred years it could be the tree holding court in Rockefeller Center.  Yet, I don’t think it’s a Norway Spruce, so if it does hang in there for fifty to a hundred more years, it just might be the year-long Christmas tree in my building’s garden – and probably why my building’s garden is destined to forever lose the block beautification award.

Block Beautification Award Judges:  Those blockheads with that eyesore Christmas tree in the garden are once again trying for the block beautification award!  Unbelievable!

What I think my building deserves far more is the block association’s equivalent to the Jean Hersholt Humanitarian Award.  Our garden might be eclectic but at least it has personality – and no creepy cemetery urns!