I was in Tribeca walking down Greenwich Street en route to Whole Paycheck mindlessly thinking about whatever it was that I was mindlessly thinking about at that moment, probably the usual — food or sex or did I remember to turn off the iron.  As I was approaching the intersection at Greenwich and Warren Streets I suddenly saw the elusive Google Maps Street View car for the second time in less than two weeks.  Click here to read about my first encounter with this exciting vehicle.

The right place at the right time.

How likely is this second occurrence in the annals of pretty unlikely occurrences?  Could it be right up there with the time I found that ten-dollar bill in the lint trap at my laundromat?  Then, a few weeks later, I opened that lint trap again and found a twenty-dollar bill.  I don’t need to play the lottery.  I play the laundromat.

Last week, there was a penny on the floor.  I left it there for the employees.

Back to my second Google Maps Street View car sighting in less than two weeks,  I was frantically digging my mitt deep my into my satchel in search of my camera while praying to myself:

Finally my recent bout of crummy karma lifted, the light turned red, and Mr. Google Maps Street View Car himself, a very nice guy named Ray (I asked him, “What’s your name?”) even acknowledged me.  How cool was that? 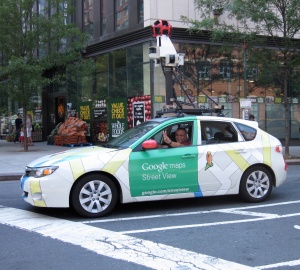 After I gave him my Lame Adventures card and he realized I was yet another harebrained blogger, the musical cue was probably comparable to the downbeat. If I see him driving around a third time, I’ll probably find myself arrested for stalking before I can ask him any questions about this gig.  Or, maybe he’ll just floor his accelerator and leave me standing in a cloud of Gotham City soot.