If you write a blog long enough, as I have these past three years, you befriend fellow bloggers in different parts of the country and/or world. Susie Lindau is one of my blogger buds. She resides in Colorado. She’s a very upbeat person, a devoted wife, mother, sportswoman and nature lover — basically my complete antithesis, but somehow we click. Go figure. This weekend she emailed me from her smartphone:

Susie: I am skiing right now!

I utterly loathe skiing. I skied once in Vermont fifteen years ago with my ex, Voom. That trip was a near total disaster. I say I skied but to be truthful, based on one lesson that lasted half the length of a sneeze, I almost required airlifting off the bunny slope. As humiliating as inching down a minor grade was for me, the lodging was the ultimate nightmare.

We stayed at a lesbian-owned and operated inn populated by ultra crunchy women. They looked at us, two city slickers in J. Crew attire that arrived in a red convertible Miata in the dead of winter, with sheer contempt. The hate was so palpable we felt like the enemy, i.e., honorary heterosexuals.

Voom, possibly under the influence of one too many martinis, booked this lodging. When I saw that the sign outside the place spelled “woman” w-o-m-y-n, I had a sinking feeling. The house was inundated with cats. There was a cat in every room for every guest. I am fiercely allergic. Needless to say, kicking our cat out — an angora the size of Rhode Island — invited more resentment. 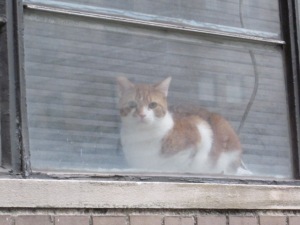 You stay on your side of the glass and I’ll stay on mine.

The first thing we wanted was booze, but they were anti-alcohol. We couldn’t even pull a Kitty Dukakis and cut turpentine with Coke. They didn’t have Coke, for they were also anti-caffeine. If they had any alcoholic cleaning products on the premises, they probably locked them in a vault. There was no herbal essence, either. We couldn’t drink or smoke, and since I could barely breathe in that cat-infested environment, we couldn’t get frisky with each other, either.

Horndog me had the genius idea that we should just open the window so we could hump each other wicked fast. It was frigid cold outside so the temperature in our room plummeted from 70 to 10 in about three minutes. Voom couldn’t climax.  She was certain that someone was outside our door listening. A lifelong romantic with the gift of speaking in poetic verse, I said:

She insisted I go to the door and check out what was going on. As soon as I opened the door, a pygmy-sized lesbian that probably lived in a bookshelf devoted to the study of mulch scampered down the hall. I seem to recall on all fours. I doubt that the sight of me in the altogether was what drove her away.  That was the time when I was still under forty, flab-free and fit, but I’ve always been alabaster white. Possibly the glow from my pelt was blinding.

The next day at the communal breakfast we learned that they only served goat’s milk. They raised goats. I recall making eye contact with one outside a window. 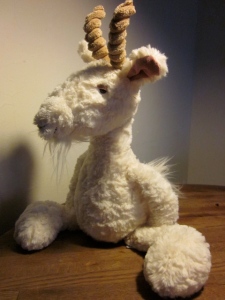 Not this particular one.

The pancakes they served were also made with goat’s milk. I like goat cheese, but the pancakes tasted gamey. It was an acquired taste that Voom lacked.

They only had herbal tea. Since I am a tea drinker, I was okay with that. Voom is a huge coffee drinker, especially first thing in the morning. She was nearing her breaking point. They dug up some Nescafé, but I imagined that it had been sitting deep in a well going back to the Carter administration.

One of the other guests, apparently a longtime visitor to this labor camp, said something stunningly insensitive about the Holocaust. The hosts agreed. That was the last straw. Voom is Jewish and even though I am predominantly Italian I am a bit Jewish on my mother’s side. I expect with my ever-growing schnoz I’ll soon be a dead ringer for the love child of Golda Meier and Lillian Hellman, but I digress. I knew the remark was aimed at us and I simply would not let that anti-Semitic crack slide. I detonated. They refunded our deposit and asked us to leave. When my significant other heard that, she finally had her long-delayed orgasm. It was so thunderous I recall snow shaking off tree branches.

Unfortunately, we couldn’t take off as fast as we wanted. What prompted the delay was the goat’s milk products combined with that ghastly instant coffee brew that they served my inamorata. The breakfast rocketed through her system at warp-speed. As I was packing our bags, she was in Sappho’s sitting room purging such a whale of a deposit she clogged the plumbing. As we drove away, Voom revealed the plumbing problem that awaited them, declaring:

Voom: Victory is mine!

I pointed out that they helped pack our car. I interpreted that gesture as our hosts being contrite considering that we did bat on the same team. My partner had a more jaundiced view of the last minute hospitality: she thought that they could not get rid of us fast enough. Looking back I think her take was spot-on.

We headed to a bed and breakfast run by a warm British woman named Ruth that brought to mind Mary Poppins. We gushed our tale of woe. She made us hot cocoa and knit us both mittens. 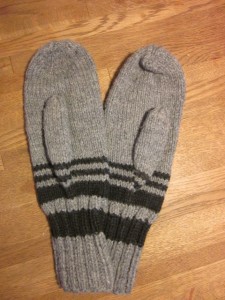 Charcoal and black – perfect colors to highlight the bloodshot in my eyes!

She made us feel so welcome that we asked her to adopt us.