Lame Adventure 362: There Goes More of the Neighborhood

Recently, I was in Tribeca, walking down Hudson Street en route to my bank. Ahead of me was a mother around age thirty pushing a tot in a stroller. Walking ahead of them was a woman around sixty wearing a mink coat and chic black leather boots. Mink Coat either stopped or slowed down and Stroller Mom bumped into her. Mink Coat gives Stroller Mom the hairy eyeball.  Stroller Mom says:

Mink Coat finds the one-word apology insufficient so she looks at me, a witness that is completely indifferent to this crime, for support. I say:

Me: I blame the economy.

Then, I blow past both of them.

The following evening, I am in my neighborhood, the Upper West Side. Milton and I have tickets to a performance of Ann, a one-woman show about Ann Richards, the former governor of Texas who was a pistol and a liberal with a wicked sense of humor. The show, written and starring Holland Taylor, is currently staged at the Vivian Beaumont theater in Lincoln Center.

I thought that it was a fun tribute to a great American woman. Milton had qualms. During intermission, he said he was certain that Taylor’s performance would rate a Best Actress Tony award nomination this season:

Milton: But it won’t rate a nomination for anything else. I can even see it closing early.

After the second act, he gave it a standing ovation and declared:

Milton: I liked the second act a lot more than the first.

I liked both acts and found it thoroughly entertaining.  It is also possible that Milton was feeling cranky about the show because as soon as we were in our seats, he confided that was starving. After the applause and standing ovation, Milton transformed into Usain Bolt and rocketed out of the theater so fast, if the doors were not already open, he surely would have plowed through them leaving a Fred Flintstone-style imprint. Once outside we headed straight to our go-to Columbus Avenue watering hole, the Emerald Inn. When we arrived, Milton peeked through the window and groaned.

Milton: It’s packed. Every table’s full. Think of someplace else to go. They’re not going to be able to seat us.

Me: Let’s just go in and find out.

We walk in. Our usual waitress sees us and says:

We order beverages, foodstuffs, and further discuss the play. I show Milton the latest prototype of My Manhattan Project. He’s impressed and we talk about whatever else we talk about over the course of a few more drinks.  Even though it’s flurrying outside, we both radiate a comfy glow. It’s been a good evening. Then, Our Usual Waitress approaches.

Our Usual Waitress: You know guys we’re closing at the end of April.

Milton and I look at her, shell-shocked.

Our Usual Waitress: Didn’t you read the article in The Times?

Under the glass on Milton’s side of the table is the heartbreaking article included in All the News That’s Fit to Print. After seventy years in this location, and being my home away from home for almost thirty years, the Emerald’s rent has been doubled from $17,500 to $35,000. They’re shuttering to make way for a trendy Kate Spade clothing store that will take over the space. We feel violated. Our Usual Waitress says to me:

Me: No way is that Kate Spade store going to last seventy years! I doubt it’ll last seven!

Our Usual Waitress agrees with me. I ask:

Me: What’s going to happen to you? Where are you going to go?

Our Usual Waitress: I don’t know.

And neither do Milton and I. When he and I first met about a dozen years ago, following a screening at the New York Film Festival, we went to the Emerald. I have frequented this watering hole with almost every member of my posse, and select lady friends, including a few times, an Irish direct from Ireland lass. I thought:

Me (calculating): We go here and it’s going to be score for me!

She had alternate plans.

Irish from Ireland Lass: I love your bar! It’s great! Too bad you’re not my type.

The Irish bars on the Upper West Side are all being forced out. As they close one by one, they take with them another piece of the neighborhood’s soul. For that, I really do blame the economy. 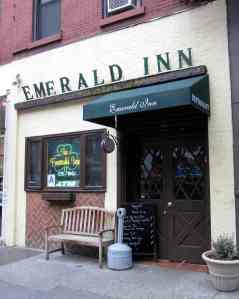 Opened the year that Mick Jagger was born. Closing during the era of the neighborhood’s slide down crap mountain*.

*An expression I acquired from my Chicago-based blogger bud, Jules at Mccrabass, who I hope will visit me before that very last round is called.

Because a room with a view has always been preferable to one without, the price of air in New York City is becoming more expensive. Yes, the air is for sale, but not on sale.

This story is about real estate developers that build glass, steel and soulless monstrosities. They’re purchasing air rights. These rights, from surrounding low-rise properties, can cost the developers millions of dollars.  The sellers can make some serious change on these very lucrative deals. The downside for the sellers, as well as surrounding tenants, is living in the gaping shadow of a mile high blight.  Owning the area’s air rights basically guarantees that rich swells that buy into these flashy towers will have rooms with views and sun. So, yes, there is now an expensive price tag on the Big Apple’s air.

Even if I could somehow afford to live in a Blade Runner-style high rise, where I’d have to slather my chalky white pelt with SPF 110 rated sunscreen just to take a gander out the window at New Jersey, I’d take a pass.  I like small.  I like low.  I’m not into blinding sunlight, either. This is not to imply that I’d welcome living in a dark and dreary ground floor cell that faces a brick wall.  I do appreciate many of life’s modern amenities — running water, a working stove, a bed the size of Texas.

Overall, I prefer a dwelling with character.  I’m a fan of original moldings, high ceilings, exposed brick, carved staircase railings, pocket doors, bay windows, and if there’s a gargoyle or some museum-worthy sculpture jutting out of the stone façade, better yet.  Buildings built in the 19th and early 20th centuries are much more easier on my eye than any modern air-owning behemoth influenced by Jenga.

Classic architecture strikes me as being built to last.  For example, if the ceiling caved in on me while I was visiting the Apthorp, Ansonia or Dakota, three coveted Upper West Side addresses, I imagine that I’d get killed instantly.

The sturdy Apthorp from behind.

This is not exactly a comforting thought, but at least my suffering would end rapidly. 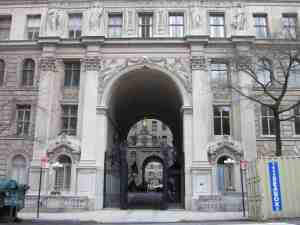 In contrast, there is the ultra modern (circa 1975) Calhoun School, an architectural eyesore a few blocks north of where I live. On the plus side, it is a low rise.  On the negative, this building was intentionally designed to resemble a TV set. 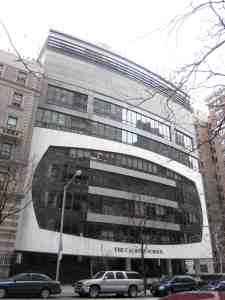 If I stand outside the Calhoun School long enough, will I get to watch Letterman?

If the Calhoun School’s ceiling were to fall on me, it does not strike me as a building made from the dense bedrock used in the more stately homes of my neighborhood.  Therefore, it is possible that if I was smacked with a chunk of the Calhoun School, I might survive that mishap, albeit paralyzed from the tongue down and left to suffer for decades. Another Calhoun School factoid: in 2004, four additional floors were added.  It now looks to me like an obsolete Seventies era TV with a pile of crap on top.

Even though a room with some view is nice, pictured below is the current view outside the window of my sanctum sanctorum.

My entertaining view of urban wildlife.

I cannot claim when I invite a guest to my lair, I’m inclined to suggest in a seductive tone:

Me: Hey babe, check out the pigeon sleeping on the air conditioner outside my window.

I’m more inclined to entertain my guests in infinitely more creative ways rather than relying on purchasing a view in the stratosphere that would easily cost my life savings, if a collection of commemorative quarters could serve as a down payment.  Who needs a view when my guest and I can take turns reciting poetry, painting (my bathroom for starters), or I could serenade her with a rendition of Ho Hey on spoons slapped against my naked thigh?

Check out my commemorative quarters collection!

I cannot deny that nighttime views of the bright lights in this big city can be romantic.  But, if the owner/occupier of that view is a shallow bore, it would be comparable to watching a TV test pattern or the Calhoun School’s cafeteria wallpaper.  Therefore, if I were in the company of someone enticing, I’d feel privileged to snuggle in a brownstone’s fifth floor attic apartment facing a bustling avenue.  In that case, I would hardly mind if every molecule of the air outside were owned by the Fat Cats of Gotham City.

Rooms without a view that look cool to me