If anyone has noticed, I’ve been on an extended hiatus from the blogosphere, completely enjoying life in the real world. One Lame Adventure tradition that’s inspired me to surface is covering New York’s Gay Pride parade with my pal, Milton. We have been constant sideline fixtures at this parade for several years, so constant that we actually appeared in a crowd shot on our local TV news in 2015. I will be forever grateful that it was not our sweating mugs in close up.

This year, it seemed to us that there were a record number of participants as well as a record turnout watching from the sidelines. Or, maybe we just showed up too late to get a good spot to shoot photos. This inflated tube courtesy of T Mobile marred almost every picture we tried to take.

One aspect of the parade I loathe is the flood of corporate sponsorship, but I realize the overt pandering for LGBT dollars is a reflection of just how far gay people have come since the Stonewall riots in 1969.

There were anemic cheers for the trickle of die-hard Bernie Sanders marchers and thunderous applause for Hillary Clinton’s tsunami of foot soldiers. 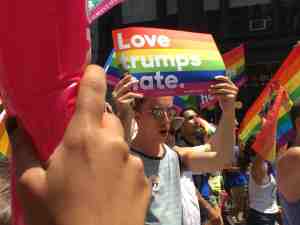 Message from member of Hillary contingent.

We did not see Hillary. She marched the last two blocks of the parade when she joined de Blasio and Cuomo at the route’s end in Greenwich Village.

This year, paying tribute to the victims of the shooting massacre at the Pulse nightclub in Orlando was in the forefront of the march. The most moving homage to the victims was 49 silent marchers shrouded in white veils wearing signs with a photograph of each victim. It was like seeing 49 ghosts. 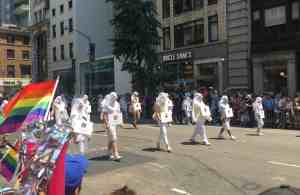 But it was far from a somber parade. The tragedy in Orlando seemed to inspire more people to march with both joyful abandon and a greater sense of purpose.

Dykes on bikes at parade’s start. 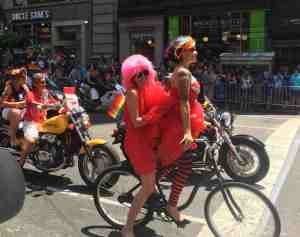 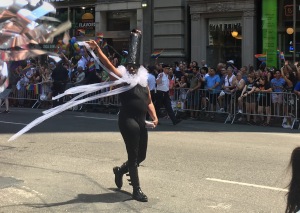 Here comes the bride and bride. 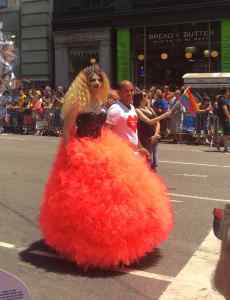 Queen for a day, or maybe forever. 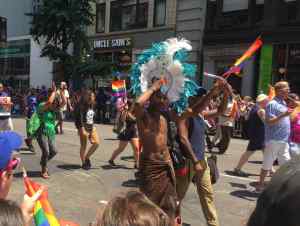