At 25 degrees on Saturday, the weather was cold, but I appreciated that it didn’t feel as bone chilling bitter as usual.

And the sun was shining.

I welcomed having feeling in my fingers and being able to comfortably run errands wearing less insulation than my typical frigid weather-wear that is vastly more suited to visiting the Barneo Ice Camp. When I walked out my hovel’s door, I was dismayed to see that the fire hydrant on my block was buried in snow and ice, unlike the other hydrants in my neighborhood. 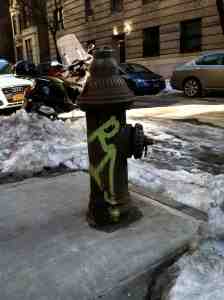 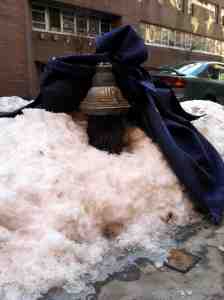 My block’s hydrant: buried in its own personal blizzard with a casually thrown furniture blanket serving as accent piece.

Why wasn’t anyone compelled to dig it out?

I imagined it was for the same reason that when the heat and hot water are both out in my building that no one places that call: the chilly, unwashed masses assume that someone else will notify Building Management about making the repair. Building Management has often told me that I’m the first and only tenant to report when something is awry. I suppose this makes me my building’s self-appointed bloviator. Or maybe I just happen to hate taking ice cold showers in the dead of winter more than my fellow residents? Obviously I did not get the memo to dig out my block’s fire hydrant.

On Sunday, the weather once again flipped New York City a stiff middle finger. It snowed another 2.6 inches. I ran errands in the early afternoon just when the initial flakes started to fall. When I returned home, I spent the remainder of the day inside my toasty warm sanctum sanctorum that was five degrees shy of doubling as the bowels of hell. Even though I stayed put in my inferno, I was not a total slug. In fact, I was quite productive. I rode my spin bike. I cooked several lunches for the week ahead. I wrote this beef about the weather. Because I had placed myself under voluntary house arrest, I didn’t need to get properly dressed. So I traded in the ascot for loungewear, exactly what I’d wear if I were home sick, but I am indeed very sick of this winter. It has completely worn out its welcome with me. I’m eager to end this toxic relationship. I want a divorce.

I think there are psychological ploys people do to get through wicked winters, but most simply endure it realizing that we’re all in this suffering together. Some people seem inclined to cross the line, such as those that under dress. Last week I noticed a woman walking through slush in ballet flats sans socks. I wondered:

Me: Is she trying to will spring warmth via footwear? Would she wear fleece-lined Uggs in July?

About a week ago, I was lying in bed, waiting to fall asleep when I noticed a bright light shining through my window shades. It was around one in the morning. I got up, thinking:

I looked out my window and saw that someone had planted a Christmas tree in the back yard. They lit it and must have forgotten to shut the lights. It looked pretty, this return of holiday festivity.

Me: Who the hell lights a Christmas tree in February? What is wrong with these people? Are they born under the thirteenth astrological sign: Imbecile? Now I’m never going to get to sleep!

I returned to bed groaning. Then, I proceeded to enter a coma until my alarm, which could double as an air raid siren, further deafened me. I will say this about winter: one thing it has in its favor is that it is the season for great sleeping.