One of my former companions, Rockets Redglare, insisted that the older a woman grew, the more she disappeared. What a huge advantage that cloak of invisibility was for wily me on the opening night of the 52nd New York Film Festival where David Fincher’s latest film, Gone Girl, received its world premier.

Outside Lincoln Center’s Alice Tully Hall, eight Gone Girl posters rubbing it in to anyone without tickets.

I scurried around the press tent virtually unnoticed.

The area had heavy police presence.

Police barricades be damned! I am woman, I am invisible, hear my camera roar!

The cops ordered rubber necking pedestrians eager to glimpse the stars to keep moving. One cop thought he was hilariously funny when he barked:

But I was able to exploit my ability to impersonate air to photograph the stars Ben Affleck and Rosamund Pike. 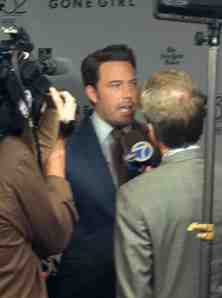 My luck ran out every time I tried to snap a shot of Tyler Perry, who was obscured by camera crews.

I envy that tree’s view of Tyler Perry!

Milton and I have tickets to about half of the festival’s thirty-three main slate screenings.

Gone Girl screened nine times on opening night. We scored tickets to one of the cheap seat screenings at the Francesca Beale Theater, located across the street from Alice Tully Hall,  where David Fincher and the cast were in attendance.

I did put the camera away while watching the film.

The film was highly entertaining. The movie web site IMDB identifies it as a “Drama Mystery Thriller” but I prefer Milton’s succinct classification:

David Fincher has directed a riveting film about a couple hit hard by the recession. The husband (Affleck) finds his living room ransacked and his wife (Pike) missing on their fifth wedding anniversary. The plot is a wild ride full of many twists and turns about marriage, money and the media. Gillian Flynn, who wrote the novel that was the source material, adapted her book into a very impressive first screenplay. Come awards time, this film will likely receive multiple nominations.

Over the weekend, we attended screenings at Alice Tully Hall, and were promptly plummeted back to earth. On Saturday, we saw the North American premier of Italian filmmaker Asia Argento’s Misunderstood. In her introductory remarks, Amy Taubin, a member of the NYFF’s selection committee and a veteran film critic, gushed about seeing that film earlier this year at Cannes. She claimed that it was about “girlhood”.

The film, set in Rome in 1984, is about a nine-year-old named, Aria, whose megalomaniac showbiz parents hate each other’s guts, divorce and treat their youngest daughter with varying degrees of anger, indifference and rare affection. Throughout the entirety of the film Aria shuttles from one parent’s home to the other’s after she inevitably steps on a landmine pissing off these insufferable clods. Twice this kid attempts suicide. As the ending credits rolled I said:

Milton: I didn’t believe a single word of it.

During the q&a, Taubin asked Argento that considering that her name is Asia, one letter different than Aria, she is the daughter of famous parents (the filmmaker Dario Argento and the actress, Daria Nicolodi), and she was nine in 1984, was any of it autobiographical? Argento looked baffled, but volunteered that her name is Aria on her passport. She also revealed that the film was a comedy. That took us by surprise. But, we appreciated that she showed school spirit and attended her screening. 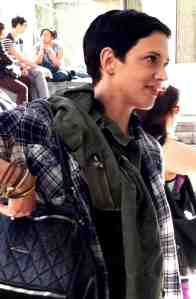 Asia Argento following her screening that compelled us to eat pasta for lunch.

The next day, we saw David Cronenberg’s Maps to the Stars, which had its US premier the night before. It is based on the novel written and adapted for the screen by Bruce Wagner. He was the only member of the production to attend the Sunday afternoon screening. He delivered a brief, but memorable, introduction. Possibly, he was quoting a fortune cookie:

Bruce Wagner: The road to hell is paved with laughter.

This film began as a clever satire about Hollywood: the egomania, desperation and how people invent themselves. Many of the jokes are hilarious. A secondary storyline features Julianne Moore as a middle age actress in a career slump obsessed with landing a particular part. Her performance was outstanding. But, the film derails in the last third. Even though it is not at all in the running for the worst film we’ve ever seen, it is one that we could not recommend to approximately 98 percent of the people we know.

My snack of choice this NYFF has been an organic dark chocolate bar I get at Trader Joe’s. Naturally I offer to share my bar with Milton but he prefers milk chocolate. He told me that the next time he eats a piece of my candy bar:

Milton: I’ll bring my own sugar to sweeten it.

Yum to me. Yuck to Milton.