Lame Adventure 434: Encounters with Heroes and Orifices on the Street in the City

Back in the day, when I was a relatively young buck-ette barely into my thirties I was gainlessly employed as a wage slave in broadcast news. One of my more memorable colleagues during those years of indentured servitude was Ernestine Frobish*. Ernestine was a classic jaded New Yorker, sixteen years my senior. Not many people called Ernestine her first name. She was Frobish. Her natural disposition was sour, but once you got to know her, she was pleasant and witty. Every so often she would share a pearl of Froboshian wisdom. My favorite gem:

Hold onto that pearl.

Fast forward to the present, about a week ago. After I’m cut loose from The Grind, located in Tribeca, I hightail over to the East Village where I’m meeting my bud, Milton, to see an off-Broadway play.

Whether I take the subway or hotfoot my way east, it will take the same amount of time to reach the theater. It was an off day from my spin bike riding. I welcomed power walking through rush hour pedestrian traffic. 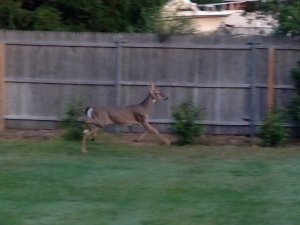 I am so fleet of foot!

As I am deftly weaving my way through the throng, I make unintentional shoulder contact with a woman thirty-five years my junior and thirty-five pounds my senior. The g-force of the impact is so significant I bounce off her. I am  airborne. My feet are off the ground. I am one with the pigeons!

“Dream on sister, you’re not one of us.”

Alas, I am not of avian descent. The street is packed with stores, all with plate glass windows that will shatter if a human flies into one at warp speed — my exact destiny. Fortunately, instead of crash landing through a storefront and marring both the display and my facial structure, two millennials of Japanese descent come to my rescue. This miracle couple catches me ensuring that I make a soft landing on my feet as opposed to a thunderously loud and very painful Fred Flintstone-style imprint though exploding glass. The woman who made the initial contact with my shoulder apologizes profusely. I, in turn, thank my saviors. It was a very civil and polite exchange to an event that lasted seconds, felt surreal and ended happily for all involved.

Ten minutes later, I join Milton completely forgetting about my flying episode moments earlier. I am fixated on his blue wristband, a wristband needed to gain entry into the theater, matching his blue water bottle cap. Life proceeds as usual.

On Sunday, there was the People’s Climate March. It was heavily promoted on the subway, in the news and even on trees in my neighborhood. 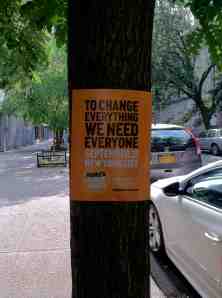 Upper West Side tree doing its part for the People’s Climate March.

I wanted to participate as a show of support because I believe that global warming is an even greater threat to human survival than terrorism. On the other hand, if I were held hostage and about to be decapitated, I would revise that thinking in a nanosecond. I had an ushering gig on PCM day so I could not participate in the march. The play I ushered was Bootycandy, an outrageous assembly of skits about being black and gay. I enjoyed that ushering gig immensely. And I felt guilty about that considering that the planet is dying.

The theater, Playwrights Horizons, is located on 42nd Street, which was directly along the route of the march. Times Square is always crowded, but it was even more crowded with an additional 310,000 people marching in the middle of it.

I knew that 42nd Street would be a zoo so I left my sanctum sanctorum earlier than usual. After exiting the subway, I walked down the busy avenue at half-speed, consciously avoiding bouncing off any oncoming shoulders or tripping over tots in strollers. As I passed a seemingly innocuous woman about my age, over fifty and under death, walking with a man, probably her husband, she gave me the hairy eyeball.

Seemingly Innocuous Woman: Look at her! Where does she think she’s going, that [insert c-bomb]!

She called me the word that rhymes with punt. I didn’t make contact with her, but she was spewing venom at me? Why, did she suffer Tourette syndrome? For a flash, I irrationally wondered if she might be heading to my play. She wasn’t. I concluded that she was a bitter bat with no filter. I remembered Frobish’s pearl of wisdom and looked on the bright side: I didn’t attend second grade with that asshole, and hopefully, I won’t encounter her again when she’s seventy.

*Yes, this is a Lame Adventures name.

60 responses to “Lame Adventure 434: Encounters with Heroes and Orifices on the Street in the City”