New York is a city that is well known for skyscrapers, glass, steel, concrete and asphalt, but it is also a place with significant urban wildlife. And I’m not dwelling on a dream I recently had where I lifted the lid off a garbage can in front of my apartment building and a skunk leaped out directly at me. Why my subconscious was thinking about a big, furry, livid skunk springing from a normally peaceful trash receptacle to scare the kale out of me, I can’t say. But the odor of skunk is familiar in my neighborhood, the Upper West Side. When I snapped this shot of the San Remo building while doing my laundry last week, what is not evident in the image is that there was the acrid scent of skunk permeating the warm summer air. Luckily for me, the skunk responsible for the stink chose to remain invisible. It even resisted the urge to take a flying leap in front of my lens.

Clouds or skunk vapor behind the San Remo’s towers?

However, the topic of airborne urban wildlife has been weighing heavy on my mind. When I enter my Tribeca-based office in the morning at The Grind, and see a pigeon perched on the sill outside my window, I welcome that feathered sight. A bird on the sill is comforting. Its tranquil presence gives me the impression that it could be a good day.

A pigeon of peaceful presence.

That was until bird Angry Bird started coming around and began monopolizing the sill. 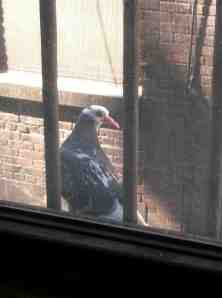 If a pigeon can be bi-polar, this is that pigeon. Of all the sills in New York City, why has this lunatic bird chosen to perch on mine? 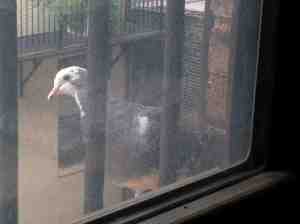 Angry Bird is a pigeon with some serious anger management issues that lives to ruffle feathers. Angry Bird hates sharing the sill and has a mean hook with its flapping right wing.

If you need further proof, witness Angry Bird in action.

For the past two months Angry Bird’s bullying has diverted all the pigeons that used to sit on the sill outside my window to perch on the railing across the way.

This proves to me that bird brains are highly under rated. Pigeons may not be eager to perform stupid pet tricks, but it’s evident that the ones in Tribeca have all gotten the memo to stay away from my sill. It’s obvious that no one wants to get bitch slapped with that wild right wing. 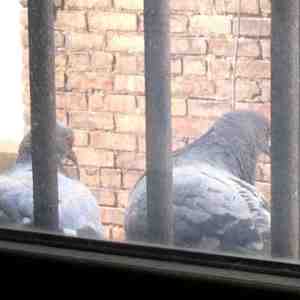 “We’re not gluttons for punishment.” (Note: shot taken before Angry Bird moved into the hood.)

My friend, Coco, thinks that Angry Bird, with its orange beak and black and white markings, might be part seagull. I think she might be onto something, but I am not going to feed that avian terrorist a piece of fish to find out. Then, it will likely never leave my sill and I’ll find myself forever grousing about this feathered foe.

“Message to everyone: stay the hell away.”

60 responses to “Lame Adventure 428: Angry Bird in the Hood”