Lame Adventure 427: Can we complain?

About two months ago I saw the Broadway play Lady Day at Emerson’s Bar and Grill with my friend, Milton. He stood in line at the crack of dawn to snag a pair of terrific $40 rush ticket seats that were very close to the stage. These seats were so incredible that when Audra MacDonald, who transformed herself into Billie Holiday, took her bow at the end of the show, Milton threw caution to the wind and committed a cardinal sin of theater going: he snapped a shot with his iPhone. You’re not supposed to sneak pictures inside a theater, but more and more people are doing that these days with the proliferation of smart phones. 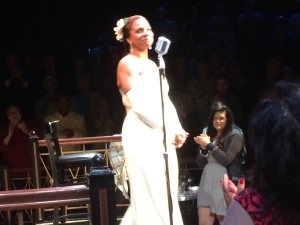 When everyone was applauding, Milton snapped this shot.

As we were waiting for Lady Day to start, I noticed that Joan Rivers was sitting across from us toward the back of the theater. Normally, Milton is the one with the celebrity spotting radar. He was very impressed that I noticed Joan. I was stunned because I hardly ever notice anyone. My natural inclination is to observe urban wildlife, bags stuck in trees, gum blots on the sidewalk or clouds. But sometimes, even when I attempt to photograph those sights, I get it wrong.

Fluffy clouds I was intending to take first.

As the crowd was exiting the theater at the end of Lady Day, a guy shouted:

That alert prompted everyone to recognize her. She was besieged like metal to magnet. Milton was surprised that I didn’t join the masses that were photographing her, but I was on a Billie Holiday high. Later, I regretted not taking a picture. How often do I get to see a living comedy legend?

This past weekend, I volunteer ushered a very entertaining play at Second Stage Theater written by Laura Eason and directed by David Schwimmer called Sex with Strangers. When the house manager emailed the volunteers about accepting requests to usher this production, I leaped headfirst through my computer screen to get a slot, somewhat inspired by the thought provoking title.

There are four ushering slots per performance, three in the front of the house and one in the back, where I was assigned. The back can be a no man’s land if the box balcony is not busy, and there were only four people sitting in that section. They were offered a free upgrade to better seats, but three were content to stay in their assigned seats. I thought that was odd because they didn’t look brain damaged. Two explained to me that they like sitting in a section that was essentially all to themselves because they wanted to spread out. Extra legroom took priority over a better view.

As I was watching audience members file into the theater, my usually defective celebrity spotting radar activated for the only celebrity I can recognize: Joan Rivers. Yes, Joan and I were in the same theater at the same time once again. The play’s 3 pm Sunday curtain was delayed due to technical difficulties, something that can happen on occasion in live theater. Audience members were offered free wine at the concession stand. This induced a slight stampede.

The best of my crummy Joan shots.

After the play ended and the audience had left, I was working clean up towards the front of the house when Joan returned with her entourage via the back of the house. She was meeting the cast, Anna Gunn and Billy Magnussen, back stage. And, once again, I got to miss meeting Joan.

Having the thrill of seeing this living comedy legend twice in two months, I have concluded that she is a celebrity who sincerely welcomes meeting with the public. I think that’s very stand up of her. If I have a third opportunity to be in the right place at the right time to see her again, and I probably have a better shot at winning the Triple Crown riding a saw horse, I’ll refrain from blurting, “Joan Rivers!” But, if she were on board, I would love to take a selfie with her.