In July, my thieving cable provider, Time Warner, increased the price of my service $4, raising the monthly cost to $109 including taxes and fees. This was for digital TV with no premium channels and “lite” Internet i.e., Internet so cheap and slow it could easily be mistaken for dial up’s Tai Chi practicing spawn following hip replacement surgery. That $109 tab brought me to my breaking point with these professional swindlers. I canceled my TV service, returned both the cable box and leased modem, and purchased my own modem to cease paying the Time Warner leasing fee ‑— which increased this month from $3.95 to $5.99. Next, I spent $9.04 to upgrade my Internet to Standard grade. My TV is a pre-digital era set, rendering it obsolete, so until I figure out a way to unload it, it is now an 86-pound paperweight. I signed up for Aereo, a streaming TV service where I can watch all the major broadcast networks on my computer to the tune of $8 a month. Now I spend less than $45 including taxes and fees for both Internet and TV. The $64 in savings will be applied toward my upcoming $54 rent increase October 1, so until then, I will party hard with this extra ten dollars in my pocket.  Maybe apply it toward something whimsical like a curling stone.

I seldom watch TV so I cannot say I miss it. At the moment, my most pressing TV programming concern has been accessing US Open Tennis. By upgrading my Internet, I am streaming the entire event for free via USTA.org. Sweet! Over the Labor Day weekend, I streamed CBS’s coverage via Aereo. I felt so thrilled with my cost-effective decisions, I did a happy dance, but I immediately twisted an ankle when I got images like this.

All you can watch buffering.

The buffering went on so long that I completely missed the rest of that tiebreaker. So, I had a brainstorm. While watching a match on my computer via CBS, I would simultaneously stream it on my iPhone via the app for USTA!

Pure genius, if only my eyes could swivel like Marty Feldman’s.

Ironically, whenever a TV commercial played on CBS, there would not be any buffering at all. 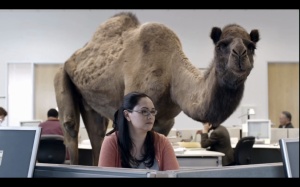 I called Time Warner to investigate if my Internet upgrade was working properly.

Me: Or is Standard service supposed to work like a geriatric hamster drawing its final breaths?

Time Warner: It looks like your Internet is a bit problematic. We’re putting a 24-hour watch on it.

Me: What exactly does that mean?

Time Warner: Every five minutes over the course of the next 24 hours, we’re going to monitor it. You can also run a speed test yourself.

I did that, too. Pictured here is my result.

I have no idea what this test is supposed to be telling me, but it streamed well.

Much of Monday’s day session got rained out.  During the rain delay my streaming was perfect. Both picture and sound were clear as a bell. 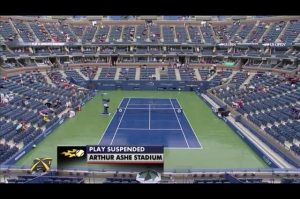 Streaming pride or the middle finger of streams?

To take my mind off my combined Internet frustration and tennis accessing anxiety, my pal, Coco, texted me after walking past the Chobani Greek-style yogurt store in lower Manhattan.

Add this to the bulging file of useless factoids.

When play resumed, my streaming also resumed hanging. It has occurred to me that the problem with my Internet could be that the USTA site is  globally accessible, so I am competing for my drip of stream with the entire world. I am already anticipating that when I try to stream the finals over the weekend, I will be subject to more hanging, crashing and rebooting. It seems that I just can’t win. But I suppose my pain could be worse; I could find myself subject to a lightening fast return serve from Serena Williams aimed straight at my person — as she did to Sloane Steven. Broadcaster Al Trautwig called Serena, “The Lamborghini of women’s tennis.” Speed test her, Time Warner.