Lame Adventure 316: Home is Where the Heat is

A note to my devoted readership – and all seven of you know exactly who you are, if I seem to have had no adventures of the lame variety during my recent vacation in the San Francisco Bay Area, you are sorely mistaken.  I was in the throes of MacBook hardware-related technical difficulties, but now all is well again in Lame Adventures-land.  Actually I exaggerate a tad for I did return to the Big Apple in a heat wave and to a 19th century era garret that is not wired for air conditioning unless I fork over $600 to my landlady.  Since I lack the necessary six hundred clams for this home improvement, I am pounding the fluids and only making tai chi-style movements to avoid suffering heat stroke or dropping dead with an inelegant thud.  Fortunately, my personal sweat lodge has a northern exposure so it is easily three degrees cooler within these baking walls than the temperature outside.

The temperature outside when I returned home from work on Thursday.

Traveling back in time about a week to wonderful warm weather sans humidity, I was in San Rafael in the company of BatPat, my best friend from college, her husband, Mick, and their daughter, Hepburn.  We visited downtown San Rafael where there’s an excellent farmer’s market on Thursday nights with live music, a rock climbing wall, beautiful fresh fruit and veggies, delicious smelling Kettle Corn as well as more exotic foodstuffs.  We walked through it and quickly grew hungry as bears.  Hepburn suggested we continue our stroll and scarf some of the exotic eats, but BatPat declared:

BatPat:  I want to sit at a table.

Mick and I trampled each other in agreement.

We headed over to Sol Food, an oasis of excellent modestly priced Puerto Rican cuisine where a live band playing outside serenades the patrons within.

If they opened a branch in my neighborhood, Manhattan’s Upper West Side, it would be one of those hot spots with a long line stretching down the street and around the block since we’re huge fans of both good food and waiting in mile long queues over here.  At the same time, the neighborhood crank would smack them with a lawsuit over the musicians playing music outdoors so a petition on their behalf would also be circulating.

Back in San Rafael’s Sol Food, the atmosphere inside is also packed with flavor.

Instruments displayed out of reach to discourage patrons from showing off the conga playing skills they lack.

Hepburn in foreground, hustle and bustle in background. 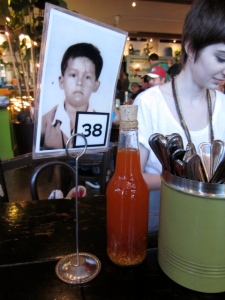 The pink beans stewed with herbs and Spanish olives were great.

Mick had the Bistec Encebollardo i.e., the steak with the Mofongo, a mashed fried plantain seasoned with garlic and olive oil. 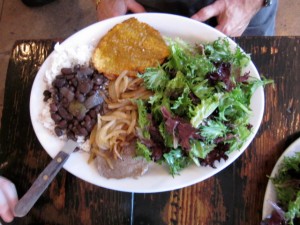 Bistec Encebollardo – pronunciation that eludes me.

BatPat and I thought the regular plantain, which is sweeter, had more character.

Hepburn, the family contrarian, ordered the Mofongo Relleno de Camarones, a.k.a. to this gringo-ette as tomato sauce-topped garlic prawns with the mashed plantains and fresh avocado.  It looked scrumptious but tomato sauce is on my Do Not Eat Ever Or You Will Die Painfully Even Faster list.  My gastroenterologist will not allow anything acidic to enter my fragile intestines, so I just stared at her dish and drooled shamelessly.

Mofongo Relleno de Camarones – oh, to be able to eat something like this again!

Everyone raved about the Limonada Fresca, fresh limeade made on site.

Since I suffer the trinity of gastrointestinal ills – esophagitis, gastritis and hiatal hernia, that I keep at bay via an insanely strict diet to avoid going back on meds and feeding that evil beast, Big Pharma, I had to settle for the House Agua. 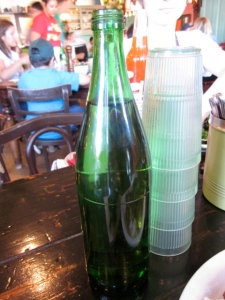 Sensational hot sauce, or so I’ve been told.

Overall being in the company of some of my most treasured friends on the entire planet and chowing down tasty food in a delightful atmosphere while listening to melodic live music, was one of those times that owns placement in my memory bank in The Good Old Days file.

We returned to the car parked in a public parking lot behind a Walgreen’s feeling mellow.

Mick:  Hey, did any of you notice that dead guy lying in the bushes? 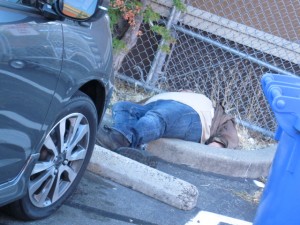 Did he make an inelegant thud?

No one got too close, but it was possible he had only passed out.  Hepburn whipped out her iPhone and called 9-1-1.  BatPat sensitively reasoned:

BatPat:  At least he chose to go near the recycling bins.