I love live theater preferably on a stage, not two hotheads having a yelling match at each other on a subway train.  One way I can afford to see as many off-Broadway plays as I do is I volunteer usher, something I do once or twice a month.  This allows me to see theater for free. The only downside to volunteer ushering is sometimes a show is a dud, but more often, they’re good. 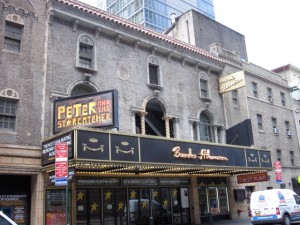 “Peter and the Starcatcher”, a play I volunteer ushered off-Broadway that has transferred to Broadway and is now nominated for 9 Tony awards. This was not a dud.

Many volunteer ushers are retirees, students or aspiring actors. Most are pleasant, but when I worked my most recent ushering gig I encountered Sour Usher.  Sour Usher is a retired woman 10-15 years my senior that’s built like Sitting Bull. I have encountered her several times over the course of the 3 ½ years I’ve been volunteer ushering, but she has never given me a single nod of recognition.  When I say, “Hi,” she gives me the “Who are you?” look.

Together, we recently ushered a play that’s still in previews.  It officially opens later this week, so there might still be some tweaks made to it between now and then.  She’s a complainer-type who has been volunteer ushering forever.  Therefore, she thinks she’s an authority that knows more than everyone in the theater company combined.  When I last ushered with her, it was for a delightful musical at New York Theater Workshop called Once.   At intermission, she confided that she hated the show.  I told her that it was an adaptation of a film.  She was unfamiliar with the film and told me that she had no interest in seeing it.

Sour Usher:  So the movie was lousy, too.

Once transferred to Broadway earlier this year and has since been nominated for eleven Tony awards. 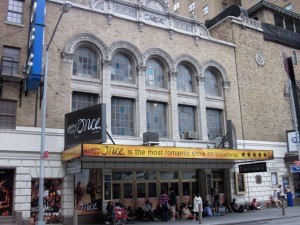 People parked outside the Jacobs theater at 9 am hoping for tickets to the 3 pm matinee of “Once”.

The play Sour Usher and I ushered recently was one neither of us were familiar with.  The program had a preface that indicated that it has been in development since 2004.  Sour Usher zeroed in on the fact that its earliest origins were as a short film for a Food Network competition.

Sour Usher:  Can you believe this?  They’re staging a cooking show!  I know I’m not going to like this.

Me (defiantly):  This is one of the most respected off-Broadway theater companies in the country.  We’re seeing this play for free.  Give it a chance.  It’s not like we’re witnessing an execution.

Me (weaselly):  Well, that sounds different.

When the house opened and we admitted audience members, the star who doubles as co-author took the stage.  She started cooking.  Sour Usher admitted that whatever it was that she was cooking smelled good.  She insisted that it was gingerbread, but we later learned that it was eggplant for baba ganoush.  Small difference.  The House Manager seated us together.  Sour Usher groused about her seat, even though we were in the fifth row and had a perfect view.  She resented not being seated on the aisle.  At intermission, she refused to applaud declaring:

Sour Usher:  There’s nothing in this play for me.  It’s all cliché, predictable, pointless.  It’s too many stories happening at once and not a single one interests me.  When it opens, the Times will kill it.

Me:  You really think that?

She looked at me and sniffed.  Maybe I did involuntarily cut a silent-but-deadly.

Sour Usher:  You like this?  [disgusted] You did applaud.

Me (defiant): I applauded because I’m entertained, I think it’s a novel play that’s well staged and I’m interested in what happens next.  Is that criminal?

Me (weaselly):  I applaud out of habit.

I know that Sour Usher thinks I’m an idiot, and possibly I am for not having the guts to say exactly what I think to her.  She’s one of those difficult, critical know-it-alls.  Arguing with her is pointless.  I save point-full bickering for women that matter that let me see them naked.  I wonder if Sour Usher even likes theater.  I thought that it was possible that the only thing she really likes is eating for I saw her inhaling a muffin at intermission.  I asked:

Me:  Is that gingerbread?

I should have known. 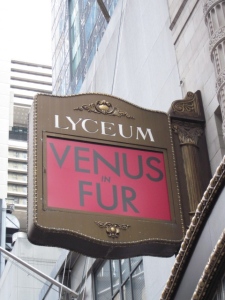