This year, as in any given year, many high profile people have been dropping like flies – Etta James, Mike Wallace, Whitney Houston, Maurice Sendak, Andy Rooney, Donna Summer, Maurice Gibb, Davy Jones, to name some names.

I have not read the vast majority of their obituaries.  Yet, I have scoured The New York Times obit section for decades.  Around age forty, my trademark paranoia and narcissism kicked into overdrive when I started paying much closer attention to people my age that seemed to prematurely purchase their rainbows.  What I wanted to know most was what caused their demise. If they were wiped out on the Interstate in a freak accident, I would think, “How tragic.”  If it was anything intestinal-related, excluding food-borne illness acquired during exotic travel (I hate to leave Manhattan so I don’t anticipate that problem), I would enter full freak out mode, break into a cold sweat, ignore the fact that I generally feel perfectly fine, and think:

The death that has interested me most thus far this year is that of a relatively low profile man who was many decades my senior, an inventor named Eugene Polley.  In an obituary written by Margalit Fox that was published in The New York Times, she states that Mr. Polley was, “ … an inventor whose best-known creation has fostered blissful sloth, caused decades of domestic discord and forever altered the way consumers watch television … Mr. Polley, the inventor of the wireless television remote control, was 96.”  Hey, my kind of guy.

Although Mr. Polley’s invention did not fly off store shelves, I doubt that 99% of US households had a single TV in 1955 much less that the average household had 2.24 sets as the households of today.  Since I watch on average two hours of TV a week (exceptions that I avidly tune in: Wimbledon and US Open tennis, the Academy Awards, the Tony Awards, election night results, and on those rare occasions when Saturday Night Live sounds like it might actually deliver), my  eleven-year-old Sony behemoth qualifies as a .24 set.

This is not to imply that I’m a snob that considers TV beneath me. My preferred mode of procrastination is the Internet.

The Flash-Matic allowed the TV viewer to turn the set on, off, change channels and mute the sound of commercials – something that I personally highly appreciate.  Thank you Mr. Polley.  Ms. Fox describes Mr. Polley as “a plain-spoken man who seemed to avail himself of his own internal mute button only rarely”.  His being a chatterbox further endears him to me.  Mr. Polley indulged in whining about  shoddy reporting that often credits his colleague, Robert Adler, who invented a better selling remote, as being the sole inventor of this device.  Not so!

Mr. Polley took pride in his invention proclaiming, “The flush toilet may have been the most civilized invention ever devised, but the remote control is the next most important. It’s almost as important as sex.” 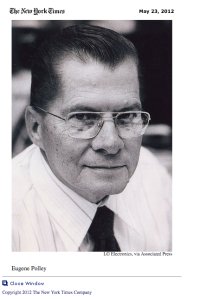 Therefore, I conclude that the  visage of this founding father of the wireless remote should grace a new coin, at least the two-cent piece.