Every so often I hang out with my friend and fellow blogger, Natasia, from the demurely named site, Hot Femme Writing in NYC.  On this particular get-together we are walking down my block to my sanctum sanctorum when she notices the Recreational Vehicle that has been polluting my Upper West Side neighborhood for years.  It’s curbside blight that I have written about before.  Tas reacts like she’s had a celebrity sighting. 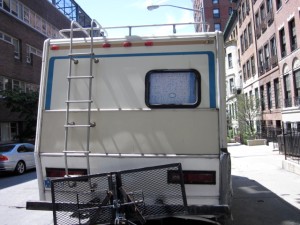 Easily confused with Angelina Jolie on a bad hair day.

Tas:  Hey, there’s that RV you hate!  It’s almost parked in front of your building.

Egging me on, she adds:

Tas:  That pisses you off, doesn’t it?

It does, but I am a self-control machine.  Therefore, I say nothing other than a low growl.  My contempt for this vehicle strikes me as ridiculous considering that I spend most of my time in one of four places – inside my apartment, inside a subway station or train, inside my office, or outside in general Gotham City.  I spend very little time on any given day standing like a doofus in front of my building hyperventilating about a legally parked eyesore.  Yet, irrationally, whenever I see that unsightly trash barge on wheels hogging space outside my door, it sets me off like a Roman Candle.  At that particular moment, I know my blood pressure is rising.

I assume that she is firing her special brand of snark at me.  I detonate:

Me:  What are you talking about?  Why are you yammering about matzo now?  It’s out of season; it’s May!  You told me you wanted to eat a baguette!

I pause for breath half-wondering if the chest pain I feel is gas or a heart attack, and if it’s the latter, will she hesitate to call an ambulance from the iPhone that seems surgically attached to her mitt?  Ignoring my conniption Tas points at the vehicle and insists:

Displaying her own level of self-control, she resists adding for emphasis:

We conclude it’s probably very stale and walk on.

A few days later, I’m running an errand for dish soap.  As I wait to cross Broadway at 77th Street, I look up at a boring high-rise apartment building. 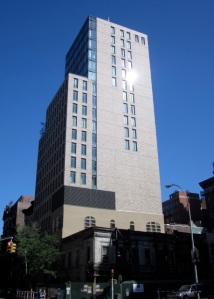 Another innocuous tall box that could have been designed by Ambien.

This is the exact kind of building I usually find invisible, but this time I do a double take.

My favorite eye catching sites are the Peter Woytuk bronze sculptures that dot the Upper West Side.  Three of them are in a three and four block radius of my home base.  Last year, he had a giant blue kiwi on display outside the 72nd Street subway entrance (or exit if you’re leaving instead of entering).  That big blue bloated bird (try saying that three times fast) has now been replaced with a raven standing tall atop a cluster of apples bringing to mind Edgar Allan Poe, fruit that’s available year round and an impressive balancing act.

I admire his three fat hens planted in the median on Broadway outside Fairway. 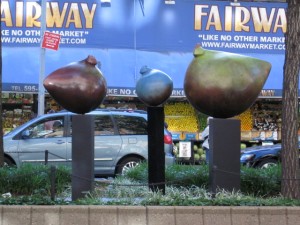 “How dare you call us fat!”

My blood pressure appreciates all of these sculptures and I would welcome any one of them outside my building.

This might also scare away the rats and skunks.