Lame Adventure 263: Out of My Element and Into Nature

As my three faithful readers know, I am the consummate city slicker that thrives on soot, crowds and enclosed spaces. I view the outdoors as anything but great and a surefire way to activate my tree, grass, and fresh air allergies.  My best friend from college, BatPat, is my complete antithesis in this area.  The woman is a walking encyclopedia about birds, trees, flowers, the solar system, etc.  If it’s anti-concrete, glass or steel, BatPat is all over it.  She fishes, cleans it and cooks it.  I eat tuna straight out of the can feral-cat-style.  As opposite as we sound, there’s a glue or maybe it’s the super tankers of pinot noir that we’ve quaffed over thirty years that has kept us close for so long.  When we got together during my visit to the San Francisco Bay Area, she suggested we take a hike.

Me:  You want me to go on a hike?  Are there escalators?

I wince, squirm and make monosyllabic sounds in response.

BatPat: You can hear the freeway from the trail.

BatPat drives us to Rush Creek in Novato (Marin County). 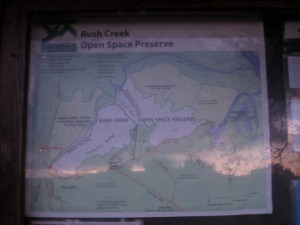 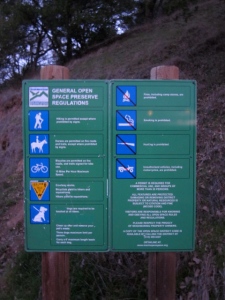 For example bike riding, horseback riding, and dog walking (with leashed dogs) are all in the do column.  Shooting guns or as they call it, hunting, is in the don’t column along with smoking and lighting fires.  The idea of not getting my head blown off by a trigger-happy descendant of Elmer Fudd has great appeal to me.

As soon as we climb out of the car, a pile of horse crap the size of Delaware greets us.

A real pile of crap.

I suspect that the owner of the horse did not have a back hoe available to shovel the mess into a thirty gallon Hefty bag the way my sister, Dovima, and brother-in-law Herb (with a silent h) are forever cleaning up after Thurber, the family dog, with sandwich bags.

“Leave it to you to compare my marble-sized droppings to Trigger’s.”

We proceed down the trail that lies ahead.

I notice a tree that brings to mind the Six Feet Under Tree.

Across from the Six Feet Under Tree is a tree that appears to be bending.  It reminds me of when I threw out my lower back something fierce in 2010.

I walked at that angle for about a month.

We see a feather in a pile of oak tree leaves; one of the few feathers that has not found its way into an Alexander McQueen design.

We look up into the branches of the tree.

BatPat:  Wouldn’t you just love to climb that tree?

We see an egret.

BatPat marvels at how it’s one with nature.  She has a bird, Buttafuoco, named by her son, Guinness.  Buttafuoco loves to eat mashed potatoes.  I suspect he’d be one with New York City.

As we walk past these branches we hear a bullfrog croaking.

We see a few ducks swimming. 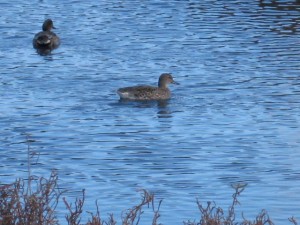 The next night I dine on duck; hopefully not anyone in this couple.

We see two more ducks hanging out on the creek’s bank.

A moment of calm in-between an hour of fidgeting

The duck on the left drove me crazy.  It was constantly fidgeting and scratching.  It took me forever to get this shot.  I hope I ate that one for dinner.

BatPat loved this red plane that flew over us.

It reminded her of a toy.  Between the combination of my snail slow reflexes and snail slow shutter speed this was the best shot I could take.

This crow had a set of pipes on it that were almost worthy of the Metropolitan Opera. 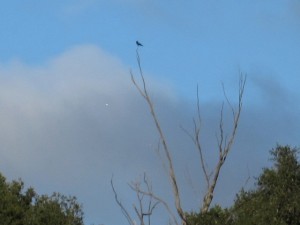 I say “almost” because although it had power, the tune it was singing, “Caw, caw, caw,” was quite a cacophonous racket.  I think the phrase, “Shut the hell up,” might have been coined in response to its song.

BatPat decided we should climb this grade.

Where’s an escalator when you need one?

BatPat:  You’re taking a picture of this?  Do you want to look like an idiot to the entire Internet?

Me:  Of course I do!  I can’t let down my readership!  Do you think I can get an airlift from a low flying hawk?

I huff and puff my way up trying to not think about how one misplaced foot fall can surely lead to my death … of embarrassment.   Yet, I make it to the top.  Since I don’t have a flag to plant, I take another picture from the reverse angle. 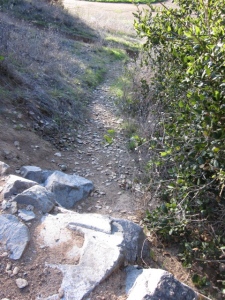 We walk on.  I see another bird giving me another opportunity to get National Geographic.

If you’ve got it, flaunt it.

We continue down the trail.

We encounter a tree stump that irritates BatPat.

Where’a the rest of the tree?

When she last visited a few months earlier, the entire tree had been on the ground.  BatPat had planned on taking a family portrait with her husband, Mick, her son, Guinness and daughter, Hepburn.

BatPat:  Who moved the tree?

She’s relieved that the birdhouse is still in another tree.

BatPat:  I wonder who lives there?

Me:  Why don’t you toss an acorn at the hole?

BatPat gives me the stink-eye.  We then return to civilization – her house where, appropriately, since we have birds on the brain, we eat turkey for dinner.

14 responses to “Lame Adventure 263: Out of My Element and Into Nature”