My colleague, Rhonda, told me:

Rhonda: You have to check out the people playing strip poker in the window of that art gallery over on Walker Street.

This reeked of Lame Adventures.

Me:  What gallery?  Where on Walker Street?

The gallery is Art in General at 79 Walker Street.  The exhibit, happening between 10:30 am and 6:00 pm (but when I saw it, it finished closer to 6:30) through Saturday, November 19th, is a performance piece created by Zefrey Throwell called I’ll Raise You One … A group of three men and four women sit in the window of the gallery facing the street and play strip poker.

If you stand outside the window long enough behind the cluster of predominantly very appreciative men enjoying this cheapest of thrills — the performance is free and by the game’s end everyone winds up stark naked. 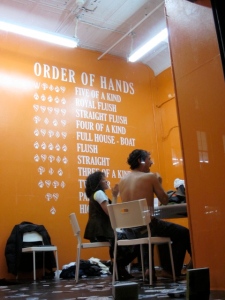 Several games are played throughout the course of the day, so odds are good that one can walk by the gallery at anytime and see someone in a state of undress. 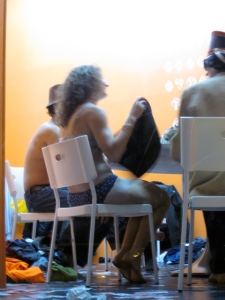 Even if the spectators were not standing outside breathing heavily on the window, I’m confident that the predominantly male audience I watched it with after I left work would still be inclined to give it a standing O, and when they returned home, a sitting Wank. 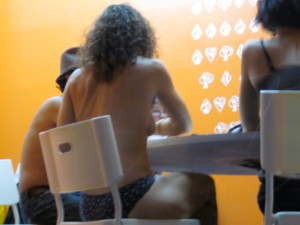 Losing her shirt and almost everything else early on.

If Throwell’s name does not ring the Marina Abramovic gong inside anyone’s head, last summer he organized Ocularpation: Wall Street a site-specific street theater piece on Wall Street.  At 7 am on a seemingly ordinary Monday morning as the sleepy masses were coming into work, 50 average appearing people that seemed to blend in with everyone else, began to spontaneously strip.  For some artists their medium is paint, for others it’s sculpture, and apparently Throwell’s is nudity.  By 7:05 the NYPD had ended that show with an unnamed performance of their own, that I call Mass Arrests.  Throwell has been a participant in these performances himself; he was a hot dog vendor in Ocularpation and currently, one of the card players in I’ll Raise You One …  Last summer he explained the message in Ocularpation to Melena Ryzik of The New York Times:

“It was “an educational attempt,” he said, “to lend more transparency to Wall Street, a street which is so damn mysterious.” Drawing on the common fear of appearing in public naked, he hoped to create “an absurdist Freudian nightmare” of nude employment: “Wall Street, exposed,” as he put it.”

Hm.  Part of me thinks that this chap is a publicity seeker living out his voyeuristic fantasies and getting paid for it.  The rest of me thinks:

Me:  So what?  He’s not murdering anyone.

Although I was not wild about the leering members of the man-on-the-street audience that blatantly viewed the women as objects and barked at them to strip faster, there were many other people that were clearly surprised and/or amused by the novelty of the piece.  They tended to chuckle and move on. 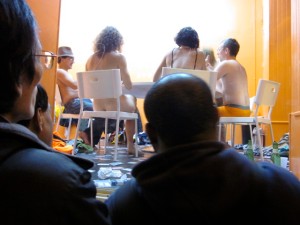 Courtenay, a very helpful gallery worker overseeing the audience, the performance, and the possibility of a return engagement by the NYPD (two cops visited briefly but made no attempt to close the show), confided that this exhibit has repeat visitors “that have stood outside for a very long time.”  Earlier in the day, the crowd is less male.  Throwell also freely pimps out himself and the other men that have volunteered to sit at the table so who am I to judge or object?

Throwell in his birthday suit.

The players are pretty evenly divided by gender.  If you’re offended, walk away.  I wasn’t so I didn’t. 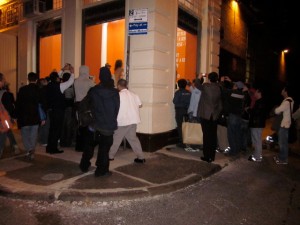 Growing audience outside gallery. Their next stop, the Met?

Courtenay added that everyone participating is a volunteer Throwell either invited or they were discovered through a casting call.

A total of 50 people are playing cards in a rotating cast.  He had to turn people away that were willing to play for payment in free lunch, snacks and beer. 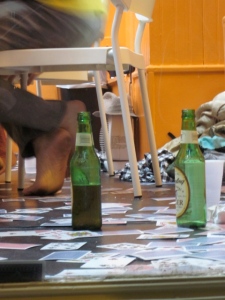 According to the gallery’s site:

“Transforming Art in General’s storefront Project Space into a stage, I’ll Raise You One… establishes a world of absurdity and purposelessness, allowing the casual onlooker to participate in a guilt-free voyeurism, while teasing out a different outlook on our personal interactions and day-to-day routines. In a world where money has taken supreme importance and all functions of life are commoditized, I’ll Raise You One… is a project where clothing, charisma and a good bluff are the only currency. Using the language of small stakes capitalism mixed with America’s favorite gambling pass-time, and the flirtatious teenage party game of strip poker, Throwell draws a fluxus parallel between what we consider winning and losing in the world today.” 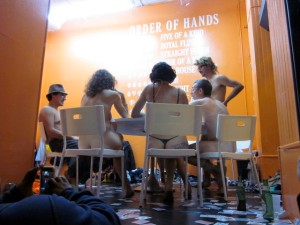 While watching the show and thinking about it afterward, this explanation did not occur to me at all.  At the end, after the players tossed the cards in the air for a final time, everyone appeared to be happy on both sides of the glass.

It seemed to me that this risqué band of exhibitionists simply served as a tonic to help the audience indulge in a silly escape from these troubling times for a few moments.  Hey, no harm in that. 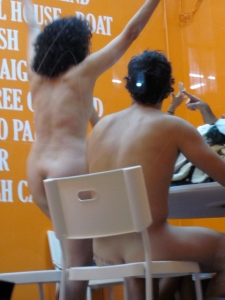