Last week Milton scored an invitation for two to the Film Society of Lincoln Center’s blue carpet 50th anniversary celebration of Breakfast at Tiffany’s.  The film is also being released on Blu-ray DVD. 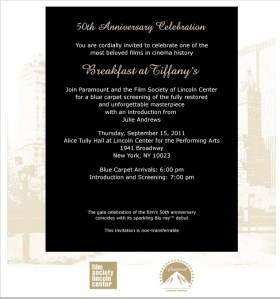 We want you, Milton!

This Hollywood classic stars Audrey Hepburn as Holly Golightly, in her most iconic role, a free-spirit that accepts $50 from gentlemen admirers for powder room visits; George Peppard, as Paul Varjak, a struggling writer with perfect hair; and Patricia Neal, as 2E, Paul’s cougar sugar-mama.  2E does not exist in author Truman Capote‘s original novella, nor is the writer named Paul Varjak and he actually works a crummy day job, something the filmmakers must have considered too tragic to show on the silver screen.

Screen legend in her own right, Julie Andrews, the widow of the film’s director, Blake Edwards, was enlisted to walk the blue carpet en route to delivering an introduction before the screening of the beautifully restored print at Alice Tulley Hall in Lincoln Center.

Even though other attendees paid for their seats, since the screening was not sold out, the FSLC emailed members that they could have a pair of tickets for free on a first come, first serve basis.  Milton said we were being tagged to paper the house.

Milton:  Do you want to go?

Me:  From now on call me Boise-Cascade!

Press and photographers crowded the space in front of the blue carpet making it tough for onlookers like us to see much behind a barricade. One of a cluster of women of a certain age who very likely first saw the film when it was initially released in 1961 opined about the blue carpet:

Woman of a Certain Age:  That’s the blue carpet?  It looks more like a bathroom rug. 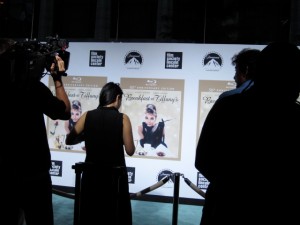 Milton and I agreed that she had the right idea.

Bebe Neuwirth with her husband Chris Calkins of the Obscured Face.

The women of a certain age banter amongst each other.

Woman of a Certain Age:  Who is that?  Is that Rachel’s daughter?

Me (thinking):  Who the hell’s Rachel?  That’s Bebe Neuwirth.

Another Woman of a Certain Age:  I think that’s Bebe Neuwirth.

Woman of a Certain Age (who thought Bebe was Rachel’s daughter):  How old is she now?

Another Woman of a Certain Age:  Who?

Woman of a Certain Age:  This Bebe Neuwirth we’re looking at.  What is she, 60?  Do you like how she looks?

I want to scream, but I’m mute.  For the record, Bebe’s 52.  Milton and I thought she looked great.

There’s a roar to our left.  For a flash Milton and I think that Holly Golightly has arrived, but it’s second best, Julie Andrews is in the house!  She looks radiant wearing a blue tuxedo, which should have been the shade of the carpet.

Milton is on a tear taking pictures with his iPhone, but he presses the wrong button and he starts photographing himself beneath the chin, so we have a selection of shots of his goatee at an odd angle.

I am not allowed to post any of those images.

Fortunately, we get a few decent shots, so decent that a woman of a certain age declares:

Woman of a Certain Age:  You finally got a good one!

Once Julie, who takes her time talking to members of the press and posing for photographs moves on, a blonde enters.

A cameraman starts filming us.

Filming us. We return the compliment.

We lower our cameras and head into the theater.

After I take this shot a guard approaches me:

Guard:  There’s no photography in the theater.

I pack my camera away, but when Julie takes the stage with the FSLC program Director, Richard Peña, it seems like every iPhone in the joint is whipped out.

I could easily breakout my camera again, but instead, I breakout a ham sandwich.  It’s late and I’m hungry.

Julie and Peña conduct an easy exchange about the film.  She was appearing on Broadway when she first saw it on her day off in 1961 at Radio City Music Hall.

Julie:  I never dreamed that the director would be my husband.

This makes sense since she would remain married to designer Tony Walton for another six years.

She speaks warmly about Audrey Hepburn, who became a close friend of hers, and says that Blake Edwards adored her, too:

She speaks about the memorable party sequence and says that Blake:

Julie: Cast his friends and everyone he knew.

Julie: When you’ve got Audrey Hepburn and Hubert de Givenchy, I don’t think anyone for a second believed that this was a heavy hooker, for God’s sake.

This is true, the screenplay that George Axelrod loosely adapted from Capote’s  novella takes many liberties with the author’s beautifully crafted World War II era story; a much grittier and poignant tale that I recently read again.  Capote wanted Marilyn Monroe cast in the role of Holly, an excellent choice, but she turned down the part because she was advised that playing a woman of questionable repute would not be good for her image.  Milton thinks that had Marilyn played the part instead of Audrey, she would have won an Academy Award.  Also, happily ever after romance lovers, although this harder, colder creature is recognizably Holly, and the writer-narrator is both fascinated and smitten with her, they’re just platonic friends.  Holly is from start to finish “a wild thing” — untameable, independent and mysterious.  She also eludes to being bisexual, something else excluded from the script.

Milton wonders if Capote was livid about the boatload of changes made to the source material to make it the crowd-pleaser it’s been for fifty years.  He deems this film is a precursor to another highly successful and completely implausible fairy tale romance, Pretty Woman.  I reason that back in 1961, there was no way that this novella’s darker open-ended tale could have been adapted.  Yet,  the audience at this anniversary screening seemed to be watching in a state of bliss.   What brings out the sap in me about this film is the Academy Award winning Henry Mancini score and the song Moon River with lyrics by Johnny Mercer.   That catchy song has been playing on a loop inside my head for a solid week.  Every time I come across the lyric “my Huckleberry friend” I’m stumped.  What the hell is that?  The Urban Dictionary has two answers:

1. A very special, good friend that’s been in your life for years, typically since youth.

Outside the theater, following the screening Milton and I are a safe distance from the adoring masses.  He voices a unique observation about this film that surely would have gotten both of us killed if said inside:

Fifty years later, we’d like to suggest the unthinkable – not a remake, but a version of Breakfast at Tiffany’s that is true to Capote’s original novella.  Todd Haynes, if you’re wondering what to work on next, how about giving this a try?

Milton and I noticed that the one character that perfectly made the transition from novella to screen was Holly’s “poor slob without a name” cat played by Orangey.  He certainly made the most of his close-ups.