Lame Adventure 12: Welcome to the Doghouse

Milton and I are both in the doghouse with our bosses.

His, Sybil of the Sixteen Lousy Personalities, is angry with him for going to the bank to cash his paycheck on company time.  This has always been against his company’s policy even though everyone in his department does it, and he has actually done this many times with Sybil.  Yet, she woke feeling foul and needed to chew on someone, so she took a big bite out of Milton for the pettiest of offenses.  He expects a department-wide email will be sent out by next payday alerting everyone to end this practice or face termination.  Usually, Milton and Sybil get along, even though she is oblivious to the fact that his contempt for her escalated years ago from mild to red-hot when she overheard he and his colleagues discussing their favorite singers.  While many of Milton’s contemporaries idolize Diana Ross, he gravitates towards Barbra Streisand.  Sybil boomed for the entire office to hear, “I always knew you sided with white people!”  That bit of poetry slammed the brakes on the remote possibility of any friendship developing between them. 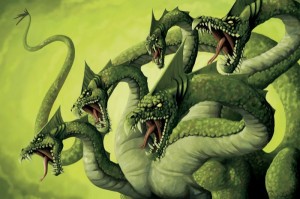 Sybil on the rag.

My boss, Elsbeth the Sensitive, is the polar opposite of Sybil.  Elsbeth is educated, quiet and refined.  She is not a screamer, a racist, homophobic, or a whip cracker, and would probably go on a retreat if she were ever accused of being any of those things.  Elsbeth’s managerial style is nearly invisible.  She spends most of the day tucked away in her office with her staff sitting outside her door, a cluster of busy focused beavers.  She takes pride in knowing that we’re all working non-stop, but I have mentioned that I am capable of being both busy and bored simultaneously.  Those kinds of quips she tunes out.

Elsbeth having tea with managerial aristocracy. That's me perched at her knee.

On this day, while doing massive proofreading and number crunching of the equivalent of the Guttenberg Bible, if it came equipped with a complicated 81 page price list, I have a spurt of literary inspiration.  I think, “Holy shit, I have to write this down!”  This seldom happens to me at work since I usually feel listless in the confines of the office, but the idea is a gem and I fear losing it.  I am at an age where the hole in my memory is comparable in size to the one in the ozone.  Rather than scribble it illegibly in the notebook I always carry for this purpose, I remove my green eyeshade and quickly type this light bulb in an email to myself.   While doing so I enter my writer’s zone, and give the appearance of ingesting a supertanker of illegal substance.

Elsbeth steps out of her office and asks, “What are you doing?”

That question jars me as much as a Mike Tyson punch to my head.  I do not have any of my usual arsenal of pithy retorts at the ready: “What does it look like I’m doing?  It’s what I’m always doing.  Suffering.  And dying.  I’ll never be this young again.  I’ve pissed away the best years of my life.  Do you need me to do something for you while I can still function?”  A soliloquy this dramatic is usually enough to make her regret asking me to do anything for the rest of the week.

Unfortunately, all I could do was fumble, and the dead giveaway was that goddamn eyeshade.  She continues, “Why aren’t you wearing your eyeshade?”  I reply, “My eyeshade?”  I pick it up and explain, “Because I took it off.”  She says, “I can see you took it off.  Why would you?”   Suddenly, a removed eyeshade is taking on the significance of an act of rebellion.  What am I doing without my eyeshade, possibly writing the blog she loathes, writing what she fears, toppling our company by revealing our secret formula, why we’re Coke to the competition’s Pepsi, if Coke and Pepsi were competing tile retailers instead of beverages that give me so much gas I could personally fuel China?  Yet, this wasn’t what I was doing at all.  It never even occurred to me.

The bane of my existence.

I could say the truth, “Okay you got me.  I was writing about a carpet delivery.”  Yet, that would open a Pandora’s box of headaches with her, “Carpet!  You’re writing about carpet!  Are you trying to enter the carpet industry?”  Anything I could say would be pointless, and the truth will not set me free.  I had an idea, I needed to write it down fast, I did so on her time, but what about all the time I work through lunch, can’t I get cut a ten minute break to collect an idea before returning my attention to the monotony of proofing?  Yet, day jobs do not work that way.  The second I enter the door and don my eyeshade, Elsbeth owns me.

Now, Elsbeth sees me as a scofflaw, a screw-off, someone who exploits her invisible managerial style, an enemy of her authority, so that eyeshade had better be welded to my head through spring.  Never mind that there are people in her employ who she pays three times what I make that have stolen so much tile their home should be her sixth showroom.  Sheesh, you’d think she’d at least get some editorial coverage from those scoundrels.  I’m facing the gallows for committing the capital offense of stealing ten minutes.

Later in the day, after enduring hours of cold shoulder, Elsbeth asks me how to spell maquette.  I ask, “What’s that, a female Mac computer?”  In a weary tone she explains, “It’s a three dimensional sculptor’s model.”  She resists adding, “your idiocy.”  I find the spelling in Dictionary.com.

Now we can add maquette to our warehouse of useless knowledge.

How I wish I could have said before she walked away:

Me:  One other thing.

Me:  I’ve been awarded a MacArthur Genius Grant.

Elsbeth:  Do you have a second blog I don’t know about?

Tomorrow I must remember to keep the eyeshade on and leave the inspiration at home, or maybe come tomorrow, I’ll be looking for a new job after Elsbeth reads this post.

3 responses to “Lame Adventure 12: Welcome to the Doghouse”