In exactly one month and a day, on September 23rd at 5:05 AM EDT, the fall equinox will arrive and summer 2011 will officially end.  Even though I much prefer early and mid-fall to the more sweltering days in summer when I feel boiled alive, I always suffer melancholy once the days start to grow shorter.  My sidekick, Greg, just feels remorse that women will be wearing more clothing.

An aspect of warmer weather that I love is seeing the many Vespas that end their hibernation.  I seem to notice more Vespas in the city every year, and I think this iconic scooter is the go-to summertime cycle in New York, and possibly other major US cities.  Last winter, one of the more haunting sights in my Upper West Side neighborhood was this rampant case of Vespa neglect. 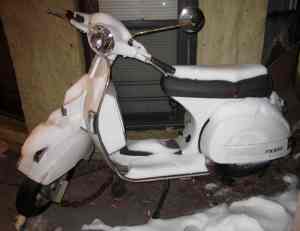 I wanted to rescue this poor little scooter parked next door to my laundromat or at least shelter it with a covering.  Every time I walked past it I could practically hear it shiver.

As the days grew longer I noticed more cyclists (scooterists?) tooling around town on these classically designed sexy little Italian machines manufactured by Piaggio.  I also noticed many parked in the street in cheery shades. 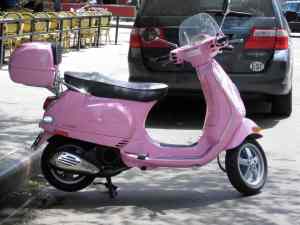 Parking ticket accessory Electric Blue Vespa owner would probably prefer not to have.

Vespas in any color, bright or dark, are always a very welcome sight to me, unlike the 45-year-old yutz channeling his (or her) inner nine-year-old riding a razor scooter down the street.

None of my friends nor does anyone in my family have a Vespa, but in the early 2000’s when I worked in TV news, I had a colleague who dated a guy that rode one that was mint green. Whenever she talked about him she referred to him as Vespa. 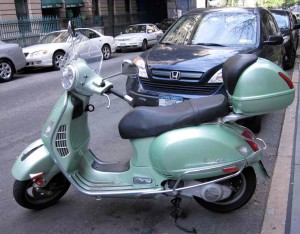 A few years ago, I ran into him on the 1 train.  He remembered me, but I could not recall his actual name.  I resisted the urge to ask:

Me: Why are you riding the subway?  What happened to your Vespa, Vespa?

My current colleague, Darkness, told me that he’s considering getting a Vespa.  He urged me to visit the Vespa boutique on Crosby Street in Soho.

This must be the place.

Ramp out front is not for wheelchair accessability, but to wheel out Vespas. Youths also love to ride their skateboards over it.

I took his advice and stopped by on a recent Saturday afternoon.  Vespa Soho is a Vespa lover’s paradise. 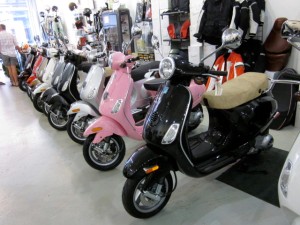 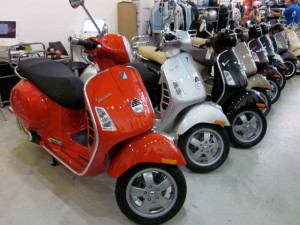 Make a statement with red.

Dan, Vespa Soho’s Sales Manager, told me that Piaggio halted Vespa sales in the US market in 1985 due to our raised emission standards which were stricter than Europe’s.  Eventually Europe raised their standards, and Piaggio’s improvements to Vespa’s technology met the Environmental Protection Agency’s standards, clearing the way for the Vespa to return to the US in 2001.

All three models have the same size gas tank, 2.3 gallons.

In order to drive a Vespa, you need a motorcycle license and you must obey the same driving rules that pertain to cars.

Dan said that the darker colors are the most popular in New York all year round, but he’s noticed that lighter colors tend to sell better when the weather is warmer.  This did not surprise me since black is the most popular clothing color out here twelve months of the year. 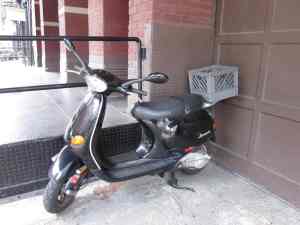 I asked Dan what can be done to prevent the scratches and dents I so often notice on the rear panel covering the back tire. 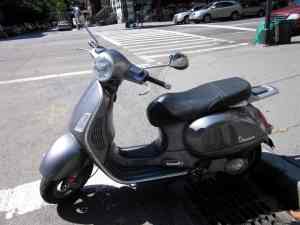 Dents on left side.

Scratches on right side.

They sell an accessory, chrome bars protection, but Dan insisted that a common sense way to prevent this problem is to avoid parking behind an Enormous Vehicle that can crunch the Vespa since it is completely invisible to the Enormous Vehicle Driver. 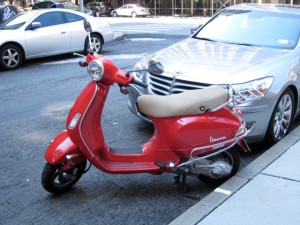 Red Vespa with chrome bar protection parked where motorist can see it. 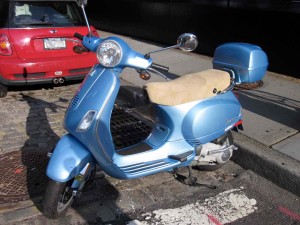 Brilliantly parked Vespa at a distance from Mini Cooper.

Living on the edge Vespa asking to get crunched by SUV. 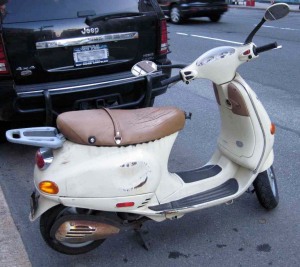 To hell and back Vespa tempting fate once again.

Dan insisted that the Vespa can be a year-round mode of transport in the city.  He pointed out that in winter we’re not blanketed with snow all season long.  He did admit that this past winter was unusually snowy, but most of the time, we get a dump of snow, it melts after three or four days, the streets are clear again, and the Vespa rider can resume riding.  I thought:

Me (thinking):  Yeah, but that rider better be dressed for the Arctic.

If I had a Vespa, I’d be more inclined to ride mine in spring, summer and fall.  I see it as a romantic getaway vehicle I could hop on at day’s start and end.  Of course I would ride it all over the city on weekends.  I’d breeze past motorists stuck in traffic as I make my escape from the monotony.  Feeling exhilarated I imagine myself singing my favorite Broadway show tunes horrifically off-key at the top of my lungs.  Although I could ignore the bugs splattering me in the glasses, the possibility of swallowing a live bee whole while belting out a sustained note in my rendition of Cole Porter’s “You’re the Top” made me return to reality.  Pictured below is the Vespa best meant for me.  <sigh>