Some people stalk other people, predators stalk prey, pigeons stalk pizza and I have been stalking a Ford Windstar minivan. My obsession with a suburban family vehicle that I would normally dismiss as a dull lump of basic transportation since I find its design about as stimulating as labor camp architecture, began one night eleven days ago. It was a cold Monday that was sandwiched between two days of snowstorms. I exited my laundromat on West 74th Street when this particular snow blanketed vehicle caught my eye. 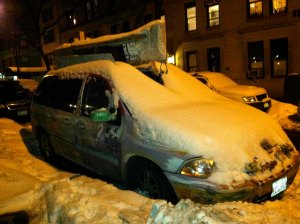 Someone had turned that entire blandmobile into whimsical rolling art. I snapped a shot of it with my iPhone wondering who painted it? I noticed that the plates were from California. That made me think of the lyrics to an old Mamas and Papas song, California Dreamin’:

“All the leaves are brown and the sky is grey
I’ve been for a walk on a winters’ day
I’d be safe and warm if I was in L.A.
California dreamin’ on such a winters’ day”

Me (thinking): If a minivan could talk, I bet it’s singing that song right now.

I returned home to my safe and warm sanctum sanctorum with minivan dreamin’ on my mind. The next morning, while walking to the subway to go to The Grind, I headed up West 74th Street specifically to see what it looked like in daylight. 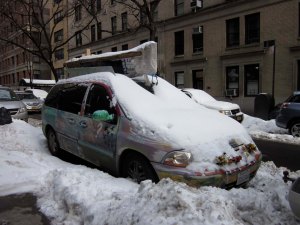 Ta da! (And still clueless about that rooftop contraption.)

The following Sunday I did another load of laundry and was delighted to see that it was still parked in the same space. And it had company! 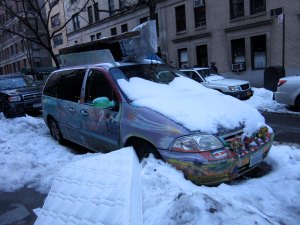 Is it dating a mattress?

This week, temperatures finally started to rise, it hasn’t snowed and thanks to recent rain, the acres of snow are rapidly melting. The New York Times ran a story about what’s started surfacing underneath the melting snow: a lot of dog crap, cigarette butts and tons of trash such as this soggy Mickey D’s bag befouling my street. 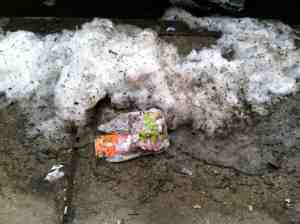 There goes the neighborhood.

I wondered what the Windstar looked like with the snow washed away? As I walked down West End Avenue en route to the subway Wednesday morning, I looked up West 74th Street and could see the distinctive wooden apparatus on the minivan’s hood. Finally I was able to see it free of Mother Nature’s dandruff. 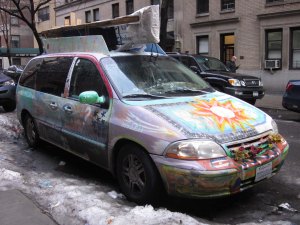 Perfect day to reveal that sunshine on the hood! 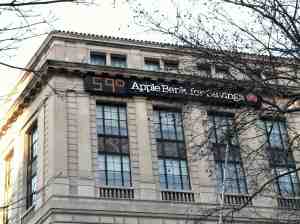 The temperature when I returned home from The Grind on Wednesday. 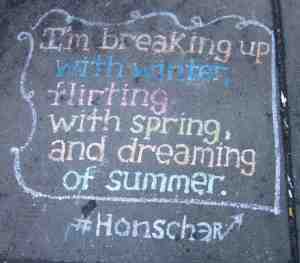 Lame Adventure 426: Am I Being Tested?

I admit that I will never be mistaken for someone who is conducting a passionate love affair with their day job. What I do is label tile, an occupation that is equal to tossing years of one’s life off a cliff, but I make an effort to consciously label tile accurately. Labeling tile is an honest, and at times, a stupid living. A recent example of stupid: I received a delivery of tile samples where I discovered I was missing two tiles. I notified the vendor that I needed two more pieces of three-inch square tile, one in the color, Latte Matte, and the other in Steel Grey Matte. Pictured below is what the vendor sent me in the follow-up delivery. 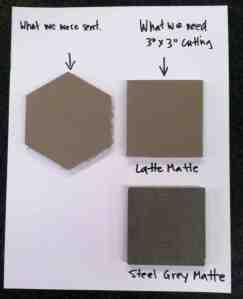 The story of my life in three tiles.

One of the many reasons why I enjoy living in New York so much is that I love the culture. It’s everywhere including in the street. 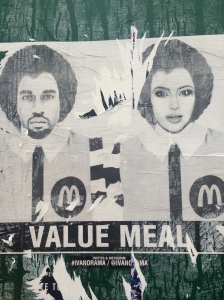 Usually, Milton and I find ways to get discounts on our theater ticket purchases. One way is to subscribe to a theater company’s season. One of the theater companies we subscribe to is the Public Theater. Recently, we had to order all of our tickets for the 2014-2015 season. We got great seats at great prices on all the dates we wanted. I had the tickets mailed to my apartment. Imagine my dismay when I opened my mailbox to find our tickets in this envelope. My friend, Coco, suggested it could double as a skateboard ramp. 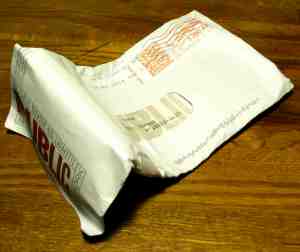 It rained buckets that day, but if my letter carrier had a beef with Mother Nature, was it necessary to direct the hostility on our theater tickets? This person had to shove our ticket envelope into my letterbox, and then they rolled and plunged two catalogs and that week’s issue of The New Yorker on top of the envelope. This took concentration and force. I told Milton that I sniffed the envelope and was relieved that it did not noticeably smell like urine.

There are days when I don’t feel like labeling tile samples, but I’m not going to take a hammer, smash them to smithereens, and send them off for display. By doing my job relatively whole assed, I can afford to attend the theater. As for my letter carrier, I’m unsure what to think other than I’m irked. 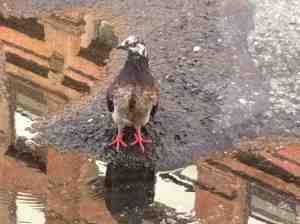 I wish he or she would invest in another way to express hostility, preferably far away from my mail, possibly at a more appropriate place like an active volcano. Occasionally, I have to junk discontinued tile samples. Maybe I should offer them to my letter carrier to throw when feeling rage.

Our tickets are smiling.

World-class hothead Alec Baldwin may have won his case against his stalker, but meanwhile, The Boomeranging Jackass Dollar has been stalking me.

What’s in my wallet.

I am not sure how it originally landed in my wallet, but I vaguely recall spending it in my go-to grocery store, Fairway. A day or two later I noticed that it was back in my billfold. So, I spent it again: this time at Duane Reade. That cashier gave me a funny look when I deftly added it atop a pile of cash while purchasing a bottle of 150 Tums, the large economy size commonly referred to in my hovel as a three-day supply. A few days later, that bespectacled buck had somehow bounced back into my wallet again prompting me to wonder:

Me: Did I check my sanity at the door?

I consciously made sure to spend it once more at Fairway, the likely source of where I got it in the first place. About a week later, I was organizing the cash in my wallet from large bills — that’s an oblique reference to a lone five — down to singles, when I noticed that it was back in my wallet. I realized that this single had appeared in my billfold no less than three times in the span of two weeks. Possibly, it’s been nesting there every day since March, but I only roused from my stupor and began noticing it in November.

Like a stray cat that continually appears on a doorstep, this one particular bill is a barnacle to my wallet. Why is that? Why is this dollar stalking me? Is this a common occurrence that’s usually invisible because most cash I carry lacks an honored statesman buried under scribble? Is this dollar sending me a message? Some might say my worldview leans in the direction of skeptical but after deep reflection lasting the length of a sneeze, I concluded that nothing meaningful is happening here. This trinity of occurrences is just odd coincidence. Nothing creepy is going on; my wallet is not making sinister threats, nor do I wake in the middle of the night to find this dollar lying on the pillow next to me.

Last week I decided that I would unload it at my laundromat. As I was pouring my detergent, I had an epiphany. Is it possible that whoever defaced this dollar defaced several others and these dollars are floating all over the Upper West Side? I may not be getting the same dollar over and over again, but possibly it’s one in a series.

I concluded that I have been wasting far too much of what’s left of my mind dwelling on this dollar taking semi-permanent residency in my wallet for half a month. I approached the clerk to exchange it for four quarters. Just as I was about to do this transaction, the Voice In My Head suddenly screamed:

Voice In My Head: Banksy!

That grabbed my full attention. The elusive UK-based street artist spent the entire month of October in New York City setting up a different installation every day of the month throughout the five boroughs. One day, he had a stand on Central Park West where people could have purchased his drawings to the tune of $60 a pop. His art has sold for six figures. Very few pedestrians walking past that stand noticed. Only ten drawings were sold and easily one million bargain lusting New Yorkers were left banging their heads against the wall as they whined about this missed opportunity to win the art lottery.

No way would I disregard my close encounter with this art world renegade. This dollar could provide the windfall of my dreams, or the cost of a can of gourmet tuna. Excited, I did an Internet search and discovered zilch about Banksy defacing any currency on his visit. Furthermore, after I wiped the delusion out of my eyes, I admitted that this is not his style in the least. Forced to accept brutal reality, I admit defeat. This defaced currency is the handiwork of a bored twit with a ballpoint pen. Someone oblivious to this factoid:

For the time being it sits on my writing table. When I next visit my family in California, I will take it with me and spend it there. If months later it finds its way back to me like a lost spaniel that has journeyed thousands of miles to reunite with its owner, then I pledge that I will frame The Boomeranging Jackass Dollar. If I forget this oath, figure I’ll probably unload it on zucchini at Fairway.

Generally, my energy level plummets the second I arrive at the workplace and it rockets the instant I leave.  Wednesday was no exception.  There I was, the portrait of lethargy sitting at my desk, using the little that remains of my cobweb-cluttered mind proofreading the floor tile equivalent of the Dead Sea Scrolls.  My sidekick, Greg, had just returned from taking a walk.

Disclaimer:  the name Space Invader did ring an anemic bell but at that very moment white noise was predominantly playing in my head.

Greg:  I think I just saw one of his mosaics outside the parking lot on Hudson and Worth.

Me (still muddle-headed):  What’s the name of this parking lot?

Greg:  I don’t know.  It’s the one we walk past whenever we walk south on Hudson.

That reasoning now rings the gong in my head and jars me out of my stupor.  I regain full consciousness, indeed recall Space Invader, recollect watching the documentary film about street artists, Exit Through the Gift Shop, and hack up a feather.

Greg:  The mosaic’s starting to crumble.  It probably won’t be there much longer.

Me:  I should photograph it!

Greg:  You should.  It’s outside the parking lot.

I hurdle my desk and I’m in my boss, Elsbeth’s office, in a single bound requesting a Get Out of Jail Free pass.  She grants it.  Within moments, I’m hightailing down Hudson.  I see the parking lot but no sign of Space Invader’s mark.  Frustrated, I am wondering what Greg meant when he said this mosaic is outside the parking lot.  This parking lot is an outdoor parking lot.  Then, I step off the sidewalk and just as I’m almost hit by a beer truck … 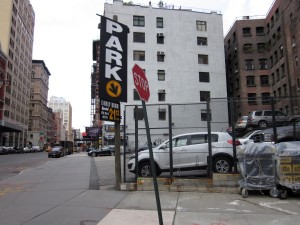 Looking north on Hudson at Worth and simultaneously defying death. 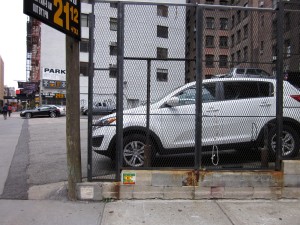 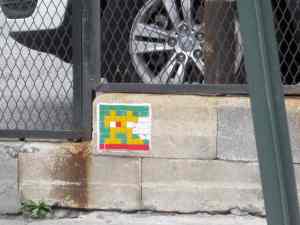 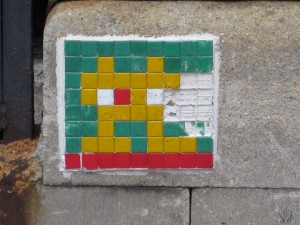 One rainstorm away from disappearing.

I return to my desk, satisfied with the sighting that was even more rewarding than the deeply philosophical street art I encountered when my friends and I were in the East Village last Saturday. 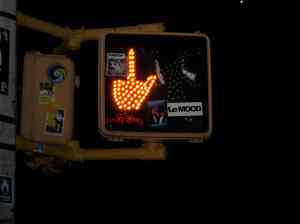 The Fickle Finger of the East Village.