It was a chilly and rainy night, perfect to stay indoors and read The New York Times online.  I have had a lifelong affinity for animation, so I was delighted to see that there was a feature about Shamus Culhane, who was the lead animator on the famous “Heigh-Ho” sequence in Snow White and the Seven Dwarfs. 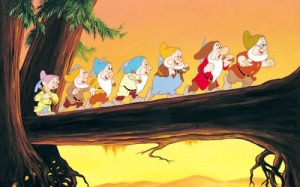 My colleagues and I singing, "Heigh-ho, heigh-ho, off to lowly paid hell we go."

This article did not dwell on Culhane’s contribution to this classic Disney film. Instead, it focused on the avant-garde images that he inserted into Woody Woodpecker cartoons he directed in the 1940s.  Tom Klein, a Loyola Marymount University animation professor, did the sleuthing where he detected that “Culhane essentially ‘hid’ his artful excursions in plain sight, letting them rush past too rapidly for the notice of most of his audience.”  Klein has published his findings in the March issue of Animation: An Interdisciplinary Journal, titled “Woody Abstracted: Film Experiments in the Cartoons of Shamus Culhane.” 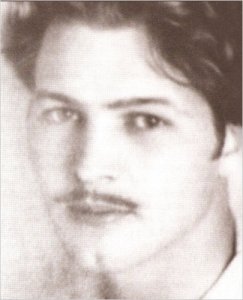 John Gilbert meet Amadeo Modigliani meet Errol Flynn: Shamus Culhane in 1932 when he was in his early twenties.

To illustrate the extent of Culhane’s unique style of artistry, the article includes hyperlinks to some of these Woody Woodpecker cartoons showcasing his abstract images.  I particularly liked the excerpt from The Loose Nut that shows Woody driving a steamroller through a doorway where the explosion of colors is shown in both real time and then in slow motion highlighting the abstract art aspect. 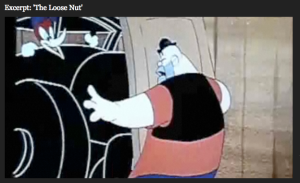 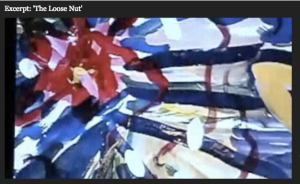 Captivated, I clicked on every link.

Towards the end of the article, it’s mentioned that the shorts Culhane directed for Walter Lantz’s studio were more remembered for their visual humor.

“In 1944 he collaborated with the layout artist Art Heinemann on “The Greatest Man in Siam.” In it the Fastest Man in Siam bolts past doorways that are distinctly phallic in shape and peers at another that mimics a vagina.” 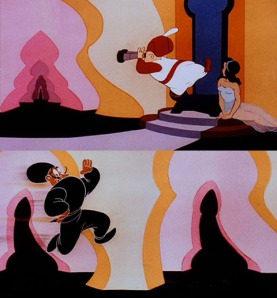 I next thought, “Where’s the link to that cartoon?”

It’s here, and even though it was made in 1944, it must still be too risqué for The New York Times online.  Fortunately, Lame Adventures has no standards.  Enjoy.