If dogs had life spans that equaled humans, my childhood canine companion, Mean Streak, would have turned forty-five this Friday. Meanie only made it to sixteen years and four months before he started leg lifting on the Pearly Gates.

Mean Streak was my brother Axel’s dog. We got him on December 26, 1969.  Axel wanted a dog for Christmas, but our parents were anti-dog. There was no puppy under our tree. Instead, they gave my brother $20 and extended anemic approval to him to find his pet.

With our sister, Dovima, driving our mother’s 1963 Chevy Bel Air, we spent December 26th combing San Francisco Bay Area pet shops in search of Axel’s four-legged friend. We discovered that the day after Christmas all that remained were the rejects. Axel felt that if we did not return home with a dog that day, we ran the risk of our parents changing their minds and telling us that we had to remain dog-less. We were determined to find a dog.

We met an adorable tan Cockapoo, but that dog was too small. We encountered a very exuberant Bluetick Coonhound mix that so desperately wanted to go home with us, her nails got caught in Dovima’s wooly sweater. Axel was concerned that she might be too big when fully grown. If he came home with the second coming of Marmaduke, he’d never hear the end of it. We kept looking.

As our hunt drew to a close, we went to Teddy’s Pet Shop in West Portal, not far from where we lived. A litter of just weaned puppies was playing in the window. The pet shopkeeper told us that these pups were exactly six weeks old. Off to the side, Mean Streak snoozed by himself. Axel selected the little sleeper, erroneously assuming that that pup was the most peaceful one of all. We later realized that Meanie was just being his usual anti-social self.

Meanie was a feisty, mighty mutt who was born to bark. He was very protective of our house and made it clear to all visitors — friends, neighbors and extended family members:

Mean Streak: I take no prisoners! 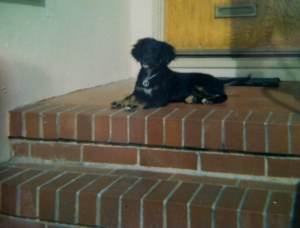 Puppy Mean Streak on the alert for trespassers or anyone.

Even though Meanie weighed only thirty-five pounds, no one ever called our dog’s bluff. He was equal opportunity and would gladly rip out the lungs of any perceived intruder i.e., every single visitor outside of my siblings, parents and grandmother, but he granted an exemption to my pet turtle.

Mean Streak: I cut the turtle a pass.

When my turtle died and I buried him in the back yard, Meanie, who was not a digger, dug him up. I could have lived quite nicely without ever having seen that sight. My dad reburied my turtle in another hole so deep in our yard Meanie would have had to dig all the way to middle earth to reach that corpse again.

Axel said I could own a five percent stake in  Mean Streak. I was allotted Meanie’s tail. A few years later, when my brother got a part time job, he paid me a dollar a week to walk Meanie when I got home from school. I  liked the job, but there were these two old guys with big dogs that were bad news. They walked their dogs unleashed, flouting the leash laws. They lumbered slowly and their dogs walked far ahead looking for trouble.

One day when I was walking Mean Streak, we encountered the two old guys exercising their pony-sized unleashed beasts. Both hounds from Hell came barreling at us. They pounced Mean Streak. The two old guys thought this was hilarious. I was a whippet thin twelve-year-old whose dog was under attack. I didn’t get the joke.

Me: Get your dogs off my dog you bastards!

They quickened their pace and pulled their dogs off of mine.

One Old Guy: You’ve got a mouth on you, little girl!

That was the first time I dropped the f-bomb on anyone in public. I reported back to Axel what had happened, including my use of profanity. Axel approved. He hated those guys and had his own share of run ins with them. One of the bullying big dogs died prematurely. We attributed it to the owner’s bad karma.

Looking back, those “old” guys were younger then than I am now. If there is an afterlife, I hope that Mean Streak is nipping them in the ankles for eternity.

I work in Tribeca, a picturesque neighborhood in Lower Manhattan lined with ancient cobblestone streets and ornate pre-war buildings radiating character and charm. 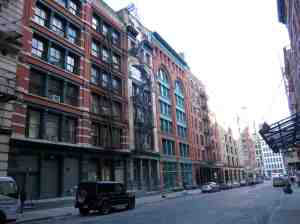 It is a trendy area housing some of the most expensive real estate on Manhattan Island. This is also a location that’s heavily populated with swells, many of them the name-brand variety. 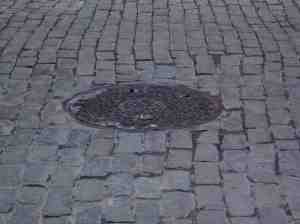 In mid-afternoon, when I run errands, I encounter pampered youngsters clad in their colorful cold weather togs as they’re being met after school by their trophy wife mothers or their fulltime nannies. Everyone looks fashionably chic until I wend my way through the crowd, upsetting the style balance in my drab uniform, the type of duds that scant wages can afford. Compared to the beautiful mothers in their cutting edge fashions, my modest attire, best suited for office work or captivity, bears a distinct resemblance to offal. 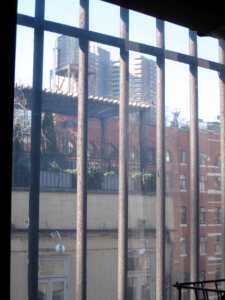 The view out my office window.

One area where everyone is equal, at least when outside, is the great outdoors where we all suffer the consequences of the elements. Now that the season is the dead of winter, there have been days when the temperature has been frigid cold. Often, noses and eyes run like faucets.  Even when bundled up, any exposed skin can instantly suffer searing pain.  Therefore, it is best to walk at a quick clip, if only to sooner regain sensation in one’s face. 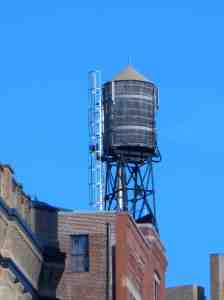 On an afternoon when the air was feeling particularly arctic I was walking up Hudson Street toward the pretty Powell building behind a handsome lad that looked to be about six. 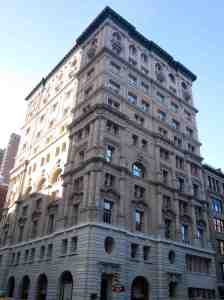 He was walking hand-in-hand with his mother, who was in her thirties.  He was wearing a blue parka and bright orange corduroy slacks. Mom was nestled in a floor length shapeless black down coat that looked familiar to me. It brought to mind a sleeping bag with sleeves. She must have missed the winter fashions newsletter. Appropriately, they were walking briskly, but not as brisk as motoring me. Just as I was overtaking them I overheard a snippet of their conversation:

Mom: When we get home I’ll make you a sandwich.

Although I was thinking the exact same thought myself, overhearing the little man drop the s-bomb was a most unexpected surprise. What really made me feel a bat squeak* of unease was that his mother seemed a-okay with it. I did not hear her admonishing her son in the least.

Had I the nerve to casually bleat that curse in the earshot of my mother when I was six, she surely would have detonated. As a child growing up in the sixties and seventies, an era when you served time rather than take a time out, my mother would have beaten every future utterance of both that word and the substance out of me. A beating that might not have ended until I reached age thirty.

That evening, I dined with my friend, Milton, and recounted what I had heard.

Milton: Are you sure he said “shit”? You know your hearing’s not the greatest.  You could have misheard. Maybe he said another word that sounded like shit?

Me: What word sounds like shit other than shit?

Me: That kid didn’t say, “Sheeeeeeee ahhhhhhhhhhh taaaaaaa, it’s cold!” That kid said “shit”. Even my deaf ears know the difference between shit and shinola.

Shinola on display in Tribeca.

*Thank you Kate Shrewsday for adding “bat squeak” to my vocabulary.