Six years ago I started writing Lame Adventures because I was down on my luck. The country was deep in recession and I needed something free to fill my time following a twenty percent pay cut in 2009. Writing a blog was the perfect solution. I had to take photographs, concoct a story, make it somewhat coherent, and field comments from my trickle of followers. That was a great time sponge.

Over the years, as my following increased, The Grind every so often stuck a crow bar in the company safe and returned some of my cut pay. After my father shed his mortal coil in summer 2014, my siblings and I sold our family home in San Francisco, and split the proceeds three ways. Suddenly I was up on my luck. My brother, Axel, suggested the unfathomable:

Axel: Why don’t you look into buying a piece of New York real estate?

Give up the rent stabilized apartment in the heart of Manhattan’s Upper West Side that I had called my sanctum sanctorum for over thirty years? So it was in a walk-up building with thin walls, worn floors, torn window screens, it had one closet, the refrigerator light was busted and a replacement bulb could not be found, the bathroom sink leaked, and the ancient stove, originally intended for a motor home, had to be lit with a match. It wasn’t wired for air conditioning, it only had three outlets with five working plugs, I had to walk three blocks to the laundromat in the blistering heat and freezing cold, my letter carrier was the poster child for anger management, the tenant below me lay dead on the floor for several days in 2014, and last summer, I temporarily had a room mate, a pigeon that flew in through the chimney. Was my closest living male relative smoking crack when he suggested that I give up that slice of paradise?

Is that spit in my mailbox or pure venom?

The time had come to do what had initially seemed unthinkable: stop being a renter and start being an owner. It took all of 2015 through January of 2016 for me to complete this process. After searching for eight months, bidding half a dozen times on apartments as far north as 103rd Street and south as 57th Street, getting rejected five times in the ferocious blood sport that is Manhattan real estate shopping, I finally had my offer accepted. Then, I entered a new hell: the complicated buying process for this sliver of Big Apple in a landmark Emery Roth co-op building a short walk from my former sanctum sanctorum.

Before I started looking into purchasing a place, I would not have known Emery Roth from an emery board. He’s the architect who designed the iconic San Remo, the building with the two towers that I’m flying past in my banner. To afford to live in the San Remo, you need the assets of a sultan. Considering that I remain in the neighborhood that I’ve called home for over thirty years, I feel like I’ve won Powerball gaining admittance into discount Emery Roth. Residents that live on the side of the San Remo facing east get a view of Central Park. In my building, my apartment faces north, so my view is a dentist’s terrace. 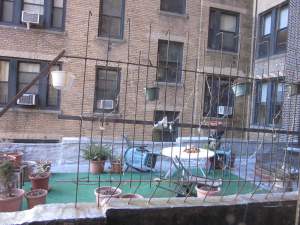 As long as he doesn’t play the tuba naked at midnight, this equals Central Park to me.

My new building has an opulent lobby, two elevators, an immaculate laundry room (open twenty hours a day, seven days a week), 24 hour doormen who greet me warmly and accept my deliveries, a live-in super and friendly handyman. My apartment has air conditioning, two closets, a real stove, a refrigerator with a light, and unlike my old sanctum sanctorum, room for a couch and space for a desk. Electricity is included in the maintenance.

Yes, the shadow box coffee table is full of tiles.

Where I was sitting as I wrote this post under a TV with devil horns.

Because my new place is near my old one, I didn’t hire movers. Aside from my spin bike, pictures, a file box and magazine rack, I ditched my old furniture and decided to start over fresh. What I did keep, about a third of what I had, required approximately 347 pack mule schleps with a duffel bag. I parted with many things I didn’t even know I had from my first phone to a specimen cup.

Specimen cup: at least it was empty … or evaporated.

Despite its many quirks, I bid my rental apartment of 32 years and four months a fond adieu. 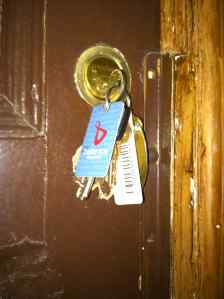 A final locking of the old door.

When I returned the keys, I suspect that my now elderly Irish landlady tossed aside her cane and did a little Riverdance, shouting at the top of her lungs:

Irish Landlady: Hallelujah, she’s gone! We can double the rent!

I am adapting to the good life in my new sanctum sanctorum at warp speed, but I am confident that wherever I go, more Lame Adventures will follow.

These guys were parked on my block as I was schlepping: maybe next time I’ll hire them.

I have not been around much lately because I have been insanely busy working long hours at The Grind. One night I worked so late when I entered the subway, the car was completely empty. 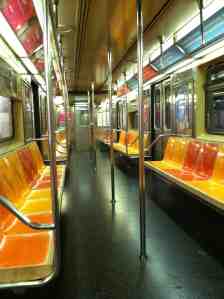 Lights on, nobody home.

Another night, the trains I normally take to head uptown stopped running altogether due to track work. That was supremely irritating.

My company’s 20-year lease in Tribeca is officially up tomorrow. When I was hired eleven years ago, I asked a manager how long the company’s lease was for. He laughed heartily and indicated that it was infinitely long. That guy’s long gone. I’m still there and infinity has reached its end point. Go figure.

For the past month, we have been packing up a business that’s been housed in a six story building in a picturesque, trendy neighborhood in lower Manhattan for two decades. We have tons of stuff. I think we may have miscalculated a tad the enormity of the task. 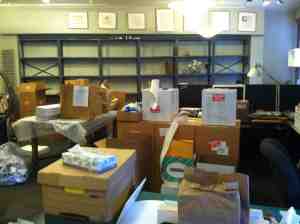 My almost packed office with Godsend’s tissues atop a file box.

When we’re not packing, we’re ditching. I have personally thrown out thousands of dollars worth of tile samples. I feel melancholy about that. Stu, our founder and owner, caught me looking quizzically at a piece of tile. He ordered:

Stu: Throw it out!

I have thrown out dumpster loads of tile, so much so that I ache in parts of my body that I never knew I could feel any pain. My inner Thor is not quite the brute she used to be. Physically, this is hard and I know that psychologically it’s not easy on Stu or my boss, his wife, Elspeth. Luckily, no one is too morose. The hardest moment in this ordeal was at the beginning when The Boss was bereft over losing her cat. Fortunately, the cat was never lost. She was hiding. Animals are smart. That cat knew some heavy shit was going on and she wanted nothing to do with it, but she likes to eat and sleep, so she surfaced quickly. The collective sigh of relief over that cat showing up was so loud in my department it could have registered on the Richter scale.

Sleep is so good!

As soon as tomorrow, Tuesday, I will probably find myself working in Long Island City. That’s in Queens. The first order of business in the new location will be mega hours of unpacking. The commute will be different, the location will be different, but the people will be the same. My long-time colleague, Godsend, will continue to sit next to me. Our new building is in a desolate architecturally lacking area. There are no cool places nearby to grab a sandwich or a cupcake. No trendy bar for Godsend and I to quaff a pint at the end of the day. All I will likely want to do is head back to mainland Manhattan at warp speed. The view outside the window will be gone and so will all my pigeon pals, unless they decide to follow. I am not counting on that happening. They might be bird-brained, but they’re not idiots. They’ll take Manhattan. 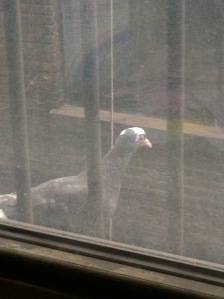