Normally I dedicate my weekends to my top three career pursuits — power sleeping, beverage guzzling, and overall aimlessness, but this past weekend the forecast called for clear skies and perfect late autumn temperatures in the forties and fifties – excellent weather for shooting pictures here in the Big Apple.  The perfect pictures to take?  The window dressing decorations courtesy of the major department stores that put on a show every holiday season — Macy’s, Lord & Taylor, Saks Fifth Avenue, Bergdorf Goodman, Barney’s, Bloomingdale’s and whoever else has an interesting display to share with the fawning masses.

Forty-five minutes after the alarm kicked me in the head at seven thirty on Sunday morning, I was riding the downtown express train to Herald Square.  Even though Macy’s does not open until nine, crowds were already gathering outside the entrance to Santaland and the Puppet Theatre. 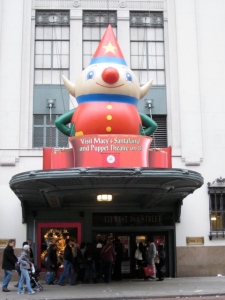 I suspect that New York Times’ top theater critic Ben Brantley will resist reviewing that show.  Macy’s theme this year, as it has been for a while, is Believe.

In case anyone misses it, Macy's has Believe plastered on the side of their flagship store.

All this believing initially activated my gag reflex, but I quickly ascertained that this believing goes back to the Virginia O’Hanlon story – the tale about the quizzical girl writing the reporter to ask if there is a Santa Claus.  I am certain that any woman named Virginia must so wish that girl had been named Lucinda or Adelaide or Hiawatha instead.  I imagine that it must get head-banging-into- the-wall-excruciating having to constantly hear “Yes Virginia …” throughout one’s life … if I were cursed with the name Virginia.

Macy’s also managed to tie in Jessica Simpson and Martha Stewart with their other windows illustrating the secret behind how ornaments are made. 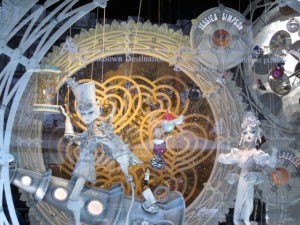 In Martha’s window, I did not notice any mention of Teflon being a key ingredient as I considered her felonious past. 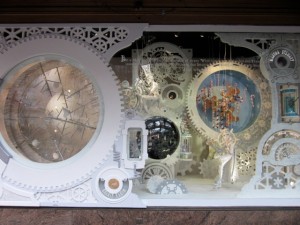 Overall, Macy’s delivered.  I give their windows a solid B for jaded adults and an A+ for the people that count most, the small fry.

I hightailed over to Fifth Avenue where Lord & Taylor’s flagship store is located between West 38th and West 39th Streets.  I arrived before the stampede, but this character clad for the season was clearly captivated.

"I love this so much I wish I had thumbs!"

Lord & Taylor is another department store with displays that aim to delight the kids and possibly inadvertently, the critters.  Everything looked like a dollhouse on steroids to me, but if I were decades younger or walked on all fours, it would probably rock my world. 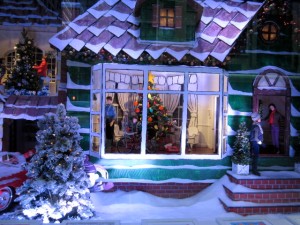 The Cadillac of dollhouses. 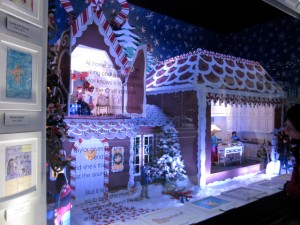 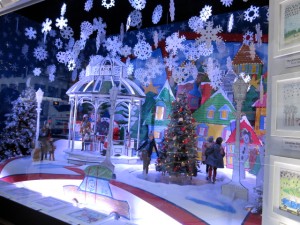 I’ve also always been a sucker for micro-sized Etch-a-Sketches and was pleased to zoom in on this one.

Another deft Lord & Taylor touch is that they have framed holiday drawings by children plastered all over their displays. Even though you see one kid drawing, you’ve essentially seen them all, if I were a youngster, I’d be thrilled to have my artwork on display on Fifth Avenue.

For that alone I rate Lord & Taylor an overall A+.

I pounded the pavement up Fifth to Saks Fifth Avenue’s display that gives a cursory nod to the kiddies with an animated mannequin riding a bicycle through each window featuring couture fashion. 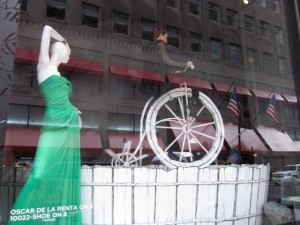 I thought their display’s mechanical theme was rather perverse.  Saks clearly has an eye on more sophisticated girls and boys.  It’s also where my hardcore fashionista buddy, Coco, shops.  She recently revealed to me that she was invited to the opening day of this display.

Me (pouncing):  You were invited to the opening day of a window display like it’s an exhibit at the Met?  What the hell is that about? It’s a department store!

Unlike Coco, I did go, but unfortunately the glare bouncing off the picture windows limited the number of pictures I can share.

Ackerman design with wheel in well-thing. 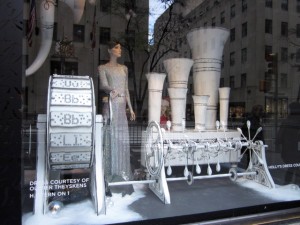 Olivier Theyskens design on another mechanical mannequin that turned wheel that did who-knows-what.

Overall, they scored a B with me, good, but not mind-blowing.  The fashion on display deserved better. 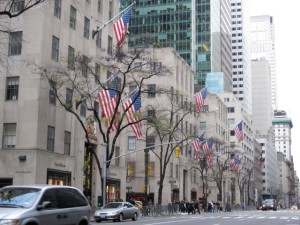 I crossed the street and visited Rockefeller Center.

Do the tens of thousands that visit Rockefeller Center know this?

As usual, they pull out all the stops on the tree and it sparkles even in daylight.

This tree is much more impressive in person.

As I inched my way up to the skating rink, the ice from below made me feel like I was standing in a freezer.  That got old quickly, especially as I consider that is how the air will feel on a daily basis for months on end soon enough.

Rockefeller Center drummer boy not hitting anyone in the head.

I resumed walking up Fifth Avenue; stopping to annoy a chocolatier at Godiva who I am certain would have loved to smack me with a spatula.

Once I lift my camera and start taking photographs, this prompts others to take notice and start snapping shots.   I have determined that picture taking is definitely an STD – a socially transmitted disease.

Next, I passed Henri Bendel, an eclectic department store I used to shop at regularly when I was fit and made an effort with my appearance.

As I glanced at my reflection and shuddered, it dawned on me that I probably have not set a toe in there in twenty years.

Other pictures I shot in the area included Trump Tower shooting stars, and Fendi’s odd belt buckle celebration of the season. 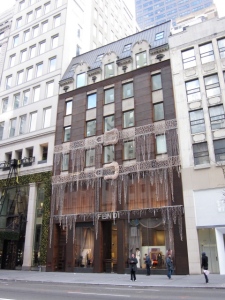 Maybe this is a subliminal message to shoppers to loosen up?

Then, there are the monuments to expensive jewelry that Marilyn Monroe memorably sang about in Diamonds are a Girl’s Best Friend from Gentlemen Prefer Blonds:

Talk to me Harry Winston.

Tell me all about it! 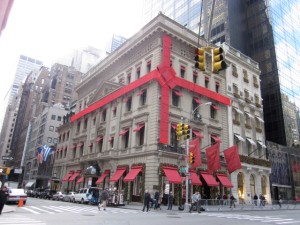 Cartier - show her you love her, give her the entire store wrapped in red ribbon! 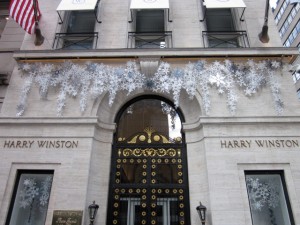 Harry Winston's advice, "Get that ice or else no dice!"

Finally I reached 58th Street and Fifth Avenue, Bergdorf Goodman and this year’s version of (to get Moulin Rouge! here) their Spectacular, Spectacular.

If there is only one set of holiday display windows to see in New York City, I suggest flipping a coin between Barney’s and Bergdorf’s but this year, Bergdorf’s is in a league of their own — miles ahead of the rest of the pack and that includes Barney’s.  Bergdorf’s theme is Carnival of the Animals.  Couture fashion combined with antiques and exquisite set design worthy of a Tony award.  Bergdorf’s windows are opulent, elegant, imaginative and simply breathtaking – across the board A+; must-see I Love New York-style extravaganza.  These pictures are anemic offerings. 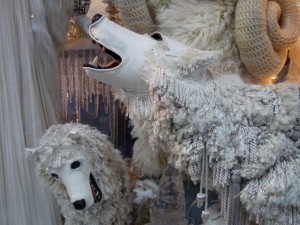 Detail of Breaking the Ice animals. Note the leather muzzles.

Detail of McQueen design, a genius with feathers.

Literally, this zebra's head is constructed out of paper.

Super paper-trained dog made from paper. 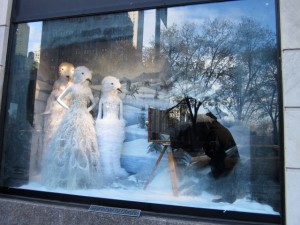 As I headed east to Barney’s on Madison Avenue at 61st Street, I was still feeling high from Bergdorf’s production, but I could hear the Lady Gaga music and I was again feeling excited.  I knew Barney’s had recently opened Gaga’s Workshop, but I didn’t realize that it would consume every display window. 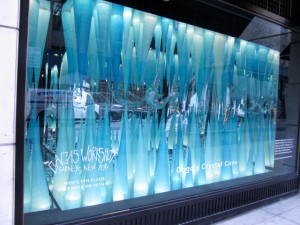 I did not find it particularly holiday-themed and thought it could have worked just as well in March or July.  It was imaginative and I do find her entertaining, but I was not knocked out.  It would have been very disturbing to me when I was a small fry.  I am sure I would have been haunted until age thirty by the naked hair-covered version of her lying on a hairy chaise. 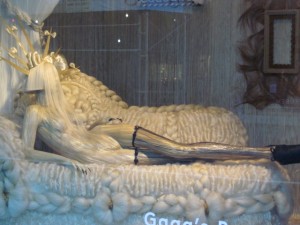 If this would not have terrified me as a child, the hair surely would have activated my allergies.

Following Barney’s I walked further east to Bloomingdale’s.  Their display is kid-proof, but when compared to this year’s family-friendly titans, Macy’s and Lord & Taylor, rather dull. 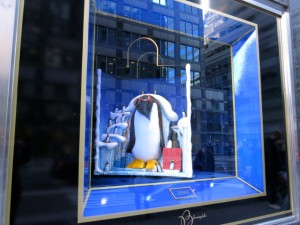 Santa and Reindeer boxed in. 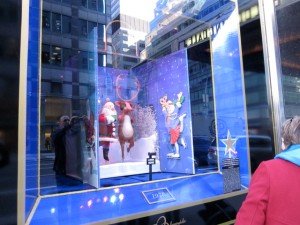 One novel aspect of Bloomingdale’s is an interactive component where you hit a button and a camera takes a photograph of you that appears on their Facebook page.  Personally, I think I’d rather appear on the FBI’s Ten Most Wanted List, but that’s just me.  Bloomie’s rating B.

Although by now I was developing blisters on my left foot that were about the size of Donner and Blitzen, I continued with my hike in the hope I might see other sites worth sharing here.  It came as no surprise that Bergdorf Goodman’s men store offered more novel displays.

As I walked west on Central Park South, I encountered the Columbus Circle Holiday Market.

Call it what it is, Material Things.

Surely, Santa was somewhere in this candy cane colored shopping megalopolis, if you had the mental fortitude I lacked to make your way through the maze of stands and the dense crowds.

Santa - nowhere to be found in here!

If there was a sign giving directions to Santa, I missed it.

The hour was approaching eleven thirty and I did not feel like walking over to Broadway to catch a bus or subway to my Upper West Side abode, but I was also too cheap to spring for a taxi. Therefore, I just continued to hoof my way up Central Park West with visions of liquefied juniper berries dancing in my head.  A few blocks north of the Columbus Circle Holiday Market, I noticed these feet. 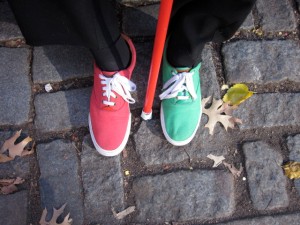 Then, I looked up at the owner of those feet, a very familiar cheery looking guy sitting on a park bench.  I thought I might be hallucinating.  To see if he was real, I approached him.

Me:  May I photograph you for my blog?

I took his picture. 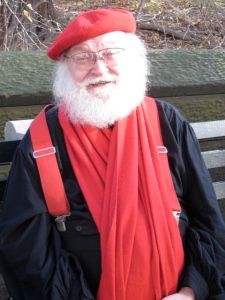 Yes Lucinda, Adelaide, Hiawatha, and even you, Virginia, there is a … “Nick”.