This could come across as anti-American, but usually when I see the name “Judd Apatow” on a film’s credits, I stay home, but to prove I still have some patriotism left, when I see the name “Jason Segel” on the credits, even on credits that include “Judd Apatow,” I’m among the first in line at the movie theater box office.  Due to the power of the Apatowian endorsement, Get Him to the Greek probably rated a larger budget, so okay, thanks Judd. 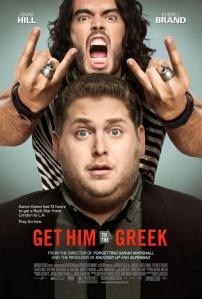 Get Him to the Greek is a comedy that hardcore foreign film lovers Milton and I were both on board to see the second we caught sight of the trailer months ago because we both enjoyed Forgetting Sarah Marshall and Greek features FSM scene stealer Russell Brand returning as the character of the rock star, Aldous Snow.  Aldous is a character created by Jason Segel who was also one of Greek’s producers.  Greek was written and directed by Nicholas Stoller, who also directed FSM.  Jonah Hill co-stars as Aaron Green, a recording industry assistant that is a dedicated Aldous Snow fan.

The screen chemistry between Hill and Brand is palpable.  At the film’s start, Aldous is in alcohol soaked free-fall following a critically maligned disastrous record that is also a commercial failure coupled with the implosion of his personal life.  Aaron has 72 hours to get Aldous from London to New York, with a detour in Las Vegas, to the Greek Theater in Los Angeles for a career comeback concert.  In-between the constant idiocy there’s a modicum of depth that makes these two knuckleheads endearing.  Although neither Hill nor Brand would ever be mistaken for the second coming of Marlon Brando and Laurence Olivier, but because they are both so talented, this film works wonderfully well.  These guys may excel at playing goofballs, but in moments of pathos, they deliver just as effectively.

Since this is essentially a male buddy film, the female characters, played by Elisabeth Moss, best known as Don Draper acolyte Peggy Olson on AMC’s Mad Men, and Rose Byrne of the FX series, Damages, are little more than superfluous devices that double as salvation for one guy and a reality check for the other.  One of the reasons I often find these madcap male comedies such a waste of time is that they’re an exclusive boys club, where the guys are having all the fun usually behind the backs of their women that are more often than not humorless whiny castrating bitches.  Do I really believe for a nanosecond that serious, slim and pretty medical resident Daphne (Moss) is happy to be shacking up with the sweet, morbidly obese, dingdong Aaron?  Early on, in what is supposed to be seen as a sign of endearment, she gives him a massive heart attack-inducing fried egg takeout sandwich that was such a blatant violation of the Hippocratic oath, it made me wonder if her character was a closet Kevorkian.

How the female characters are portrayed is a minor quibble.  Based on the trailer, I knew what I was in for, 72 hours of silliness that I am pleased to say was highly entertaining.  Sean Combs plays Sergio, Aaron’s recording industry executive boss, and he’s quite effective as an extreme send-up of himself.  The idiotic lyrics to Aldous’s songs made me think of those in one my favorite mockumentaries, This is Spinal Tap.  Overall, Get Him to the Greek delivers.

Following that satisfying screening, Milton and I visited Magnolia Bakery on Columbus Avenue.  Recently, he was told that his favorite item on their menu, Hummingbird Cake, was too hard to make during summer.  We don’t know why, but I am quite sure that this cake is hummingbird free, so we assume that it might be because it is too labor-intensive an endeavor during the hot weather months.  As for my favorite, the chocolate banana cupcake is seldom ever on the menu.  Before entering the store I said:

Me: Gee, I hope my chocolate banana cupcake is there.

Then, we opened the door and what did we see – both Hummingbird Cake and one chocolate banana cupcake!  We blurted enthusiastically:

Me:  Oh, look; they have my chocolate banana cupcake!

As if under a spell, Milton marched straight to the cake line.  That announcement of mine caused all six people ahead of me in the cupcake line to focus on “my” one cupcake.  I thought, “Oh no!”  Now I was suffering an intense anxiety attack.  Just as I was about to call Milton on his cell phone to bark an order, he looked back at me.  I mouthed frantically, “Get that chocolate banana cupcake!”  He did.  Phew! 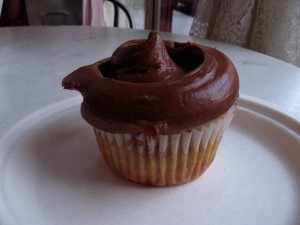 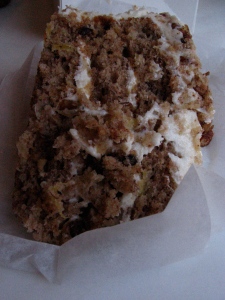 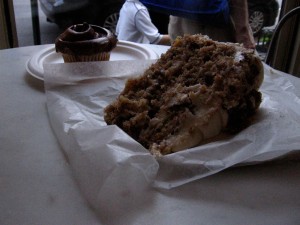