Recently over food and beverages, Milton and I were talking about the new Matthew McConaghey ad featuring this Hollywood hunk that seldom makes my radar looking very Greek God-like.  Milton insists that McConaughey’s most recent film, The Lincoln Lawyer, about a lawyer that practices law from inside his car (yes, a Lincoln) was:

Milton:  A dumb sounding premise, but they pulled it off.  It was quite good.

I could not get beyond the inanity of the premise and made no effort to see that movie.

Thinking about McConaughey’s perfect masculine beauty in that ad caused Milton to inhale three entire French Fries whole without gagging, my dear friend was in such a state of bliss.  If a terrorist with two sawed off shotguns had entered our dining booth and pointed each weapon at our heads and barked this order:

Terrorist:  Name the product in that ad right now or both your heads are gonna paint these walls!

Well, our heads would have easily gone the way of a Jackson Pollack drip painting for we would have sooner guessed he was selling bronzer than Dolce & Gabbana men’s fragrance.  Calling this product cologne must be too Wal-Mart.  For all I know, Milton still has no clue what McConaughey is selling.  When I saw this new wider shot version of that ad (pictured below), I immediately emailed it to my pal.

Anyone want to speed read The Odyssey with me?

In fairness to Milton, he was actually calling in response to another email I had sent him about what time we should meet for dinner.  Food motivates him to act almost as quickly as images of Greek God-like guys.  While we were on the phone Milton opened my other email and I heard low murmurs of immense approval.

Me:  That image reminds me of Leslie Howard.  He should be lighting two cigarettes and handing one to Bette Davis.

Note:  It was actor Paul Henreid that lit the two cigarettes and handed one to Davis in Now, Voyager.

Milton got my point and rather liked the suggestion.  Milton thinks that this McConaughey pose could become an iconic image that stands the test of time.  For readers unfamiliar with Leslie Howard, a matinee idol from the Thirties and Forties, judge for yourselves. 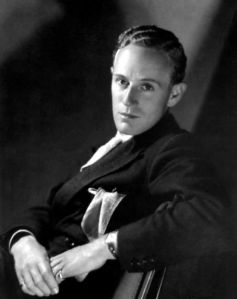 I wish I knew who took this photograph of Leslie Howard.  It brings to mind the great Hollywood portrait photographer, George Hurrell.  He was a magician with light.  Now, Photoshop can almost make a Hefty trash bag look equal to Joan Crawford at the height of her beauty.  Almost.

Or, Photoshop can pull off stunts like a picture Milton recently found while web surfing I don’t know what.  Possibly “pugs stuffed in Eames chairs.” 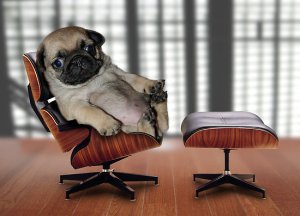 I think I’d rather stare at the McConaughey picture.