The only major television event that regularly excites me is the Academy Awards.  This is a bit perverse since I am seldom excited by most mainstream movies and that is the predominant fare that rules this extended tribute the film industry pays itself annually.  Yet, I am what I am, a film-whore.  Although I’ve seen nine of the ten Best Picture nominees (only missed District 9), no commercial films released in 2009 blew me away including Avatar (but I will admit a soft spot for Up since it made me think of my widower father, plus I liked the chubby Asian Boy Scout and the dogs).  I am not such a snob that I failed to recognize this box office titan as highly entertaining and worthy of its nominations, but as the ending credits rolled, I wondered, “Huh, what will the kids look like?”  Since it sounds like James Cameron is going to create a sequel, I guess I’ll get to find out.  Woo hoo.

Every so often, a fluke that annoys the masses, but impresses me, does get award-winning recognition.  In recent years, friendo, it was No Country for Old Men.  Usually, I’m apoplectic about some poor choice, like Crash stealing Best Picture from the far more worthy Brokeback Mountain.  I can feel my blood pressure rise just typing that sentence. Even my father and boss were scratching their heads over that one.  Yet, if Avatar is the big winner on Sunday, I do not anticipate anyone needing to call 9-1-1 for an ambulance on my behalf.  Ideally, I would like to see Kathryn Bigelow win Best Director for The Hurt Locker.  She’s the first woman nominated for directing that deserves the victory since Lina Wertmuller for directing the Nazi concentration camp dramatic comedy, Seven Beauties, back in 1977.  Wertmuller lost to John G. Avildsen who directed that year’s (allow me to access my air sickness bag) crowd-pleaser, Rocky.  Should Bigelow lose as her predecessor did, I will think that she got robbed, but I will be able to function in-between screaming fits. 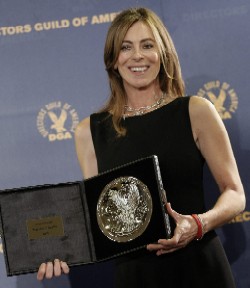 Bigelow with her Directors Guild award.

My first lame adventure that I can recall was film-related.  It occurred in my San Francisco-based tot-hood when my parents announced that they were taking me to see my first film, Best Picture winner, West Side Story.  I was no more than 4, maybe as young as 3.  It was one of the best days of my life (ever).  I also got my first pair of sneakers that afternoon.  They were PF Flyers and marketed as allowing the wearer to run faster, jump higher and a third thing, maybe kill yourself sooner.  My mother also allowed me to select the color I wanted.  I shrieked, “Red!” at the top of my lungs and almost deafened the salesman.  That evening, after seeing my first movie in my first pair of sneakers, I went out of my mind.  I HAD to move to New York.  I wanted to be a shark.  I wanted to be a jet.  I wanted to dance in the street.  I wanted a girl named Maria.  I had so much energy after seeing that film in my brand new sneakers, I did a somersault, and threw out my neck.  That instantly slowed me down.  During my recovery, my father offered me a compromise solution to appease my delirium.  He taught me how to snap my fingers, a safer alternative to channeling my non-existent inner Cirque du Soleil.

The film that started it all.

Now, that I am some years older, I am more tranquil when expressing my film-inspired enthusiasm.  Last October, I was eating a roast beef sandwich as I waited for Milton in the seating area outside Alice Tully Hall to attend a screening of Michael Haneke’s The White Ribbon at the New York Film Festival.  Haneke walked right in front of me, and stopped to talk to a small cluster of people, clearly friends or family.  This thrilled me beyond belief and I could feel my heart race.  I may have even had a beef shred protruding from my mouth momentarily before quickly accessing my toad-skills to suck it in.  I considered taking a photograph of one of the most talented filmmakers currently working, but I decided to feign cool New Yorker-dom and remain in the closet about my consummate film nerdia.  I so wanted to pee myself. 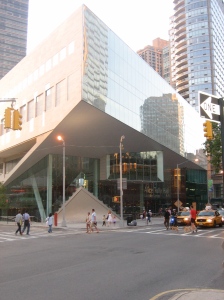 When Milton joined me, oblivious to walking past Haneke, he said, “Hi.”  I pointed with my eyes and replied sotto voce, “Haneke.”  Milton turned, and looked nonchalantly in the direction of my visual cue.  He looked back at me nodding his head slightly and smiling wryly in approval, equally aware that we were in the aura of filmmaking genius.  After Haneke entered the building, I gushed my guts out to my friend about aching to take a photograph of this great cinema artist, possibly the most interesting filmmaker working today since Ingmar Bergman retired from directing.  <sigh>  Milton thought that ignoring my inner paparazzo was the preferred course.  I agreed and then pounded my head against the pavement in agony before following my companion into the theater.  When will I ever be this near cinema greatness again?

The White Ribbon is nominated for two Academy Awards, Best Achievement in Cinematography, and Best Foreign Language Film.  Avatar is also nominated for cinematography and I anticipate it could dominate, but The White Ribbon was spectacularly shot, so I was delighted when I heard that it received a deserved nomination in this category.  I have only seen two of the other Foreign Film nominees, Ajami from Israel and The Prophet from France.  The competition from those two is stiff, but if I were a voter, I’d stick with The White Ribbon.  I will be dismayed if it loses, but not so dismayed that I will end up on life support …  Famous last words.