“It could be better but it’s not terrible.”

This recent observation by my colleague at The Grind, Godsend, about some holes we drilled through wood, could double as a single sentence summary statement about my entire life thus far. There’s always room for improvement, but if I become road kill under the wheels of a beer truck tomorrow, my 28,382,400+ minutes walking this planet have not all been entirely misspent excluding the fear, agony and humiliation I’d surely suffer were I to find myself flattened by a ten ton vehicle. Many of the nearly 16,293,600 minutes that I’ve lived in New York City have been okay, and thankfully, relatively pain-free. This excludes the emotional suffering incurred when my go-to market, Fairway, stopped carrying my all-time favorite summertime confection, chocolate dipped frozen bananas that they sold for two bucks Back In The Day. Oh, how I miss those rock hard bananas that, come to think of it, could also double as instant justice in lieu of a baseball bat. If A Mystical Being were to suddenly pop into my sacred space right now and offered me one of the following three choices:

A Mystical Being: You may resume committing your favorite consensual lewd acts to your heart’s content with Daffodil the Merciless, you may stuff yourself royally with chocolate dipped frozen bananas from Fairway for $3 each (price adjusted for inflation), or you may have your name fast tracked in the Publisher’s Clearinghouse Win $5000 for Life Sweepstakes and Pass On That Haul to Anyone of Your Choosing After You’re Dead, but here’s the fine print: the likelihood that you’ll be the actual winner is nil. What is your choice? Think this through. Choose wisely.

Hit the pause button. Mystical Beings, favorite lewd acts, frozen bananas, inane win-less contests, but back to favorite lewd acts: would I really prefer to lick a piece of frozen fruit on a stick over a willing cruel vixen? These days the sad but true answer is: yes. Where is this going, am I suffering a meltdown? Yes, I am! The mercury over here has been hovering close to 90 at midnight, and feeling closer to 100 during the day, with humid air that is thick and breeze-free. What do I think about this week-long heat wave? 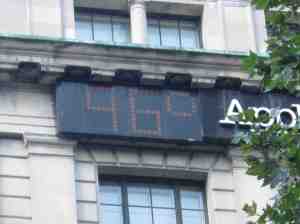 Me: It is terrible and it could be better.

Going in the wrong direction from better.

I take no pleasure living in Hell. My energy is depleted. I now have three strategically placed fans blasting in my sweltering hovel* at all times — coincidentally inspiring me to rename my digs Fan Central Station. I rather like dry heat, but this humidity that engulfs me when I am walking two feet outside, making me leak two pints of perspiration that leave my clothes dripping wet and sticking to me like glue — not the most attractive image when clinging to runaway waist flab — has got to go. I hate it. Hate it, hate it, hate it. It impacts the order of my thoughts. Fantasizing about frozen fruit my market stopped carrying a decade ago should never, ever take priority in my mind over real or imagined naked fun. This is an outrage!

*For anyone new to Lame Adventures, my modest abode is in a century old Upper West Side brownstone  is not wired for air conditioning. In July and August of every year it is still 1913 in my rent stabilized garret.

Lame Adventure 321: Sunday in the Park with Lola

It’s been a brutally hot summer in the city thus far this year.  Since I live in digs that are not wired for air conditioning, my queen-sized pillow-topped mattress that usually feels like the comfiest of clouds feels more like a grill pan over high heat these days. Yet who am I to complain about not having had a restful night’s sleep since May?  At least I reside walking distance from the oasis that is Central Park.

On Sunday, when the heat and humidity were a millimeter below sweltering, I visited the park with my friend, Lola.  We entered, took a wrong turn, almost crossed a triathlon’s finish line, reversed course, grabbed lemonade for her and iced tea for me at the Le Pain Quotidian near Sheep’s Meadow, exchanged yak about how that LPQ must be a goldmine, and then made a beeline for a shady tree where we promptly suffered that familiar middle age malady, CRS (Can’t Remember Shit).

Both of us blanked on the name of the famous landscape architect who designed the park.  Lola tried in vain to find the answer that was on the tips of our frozen brains on her iPhone but the Gods of wifi were against us.  Later, while I was batting away a bug the size of a hornet, Frederick Law Olmstead’s name popped out from one of the holes in my head.  Actually, Olmstead co-designed the park with Calvert Vaux, whose name I did not know until now, but I’m confident that I’ll be brain freezing on him as soon as I finish writing this sentence.

Sheep’s Meadow has often been a sea of sun worshippers.  The sheep were relocated in 1934 because (according to Wikipedia):

“There was fear for the sheep’s safety by hungry folk during the great depression. Officials were concerned that starving men would turn the sheep into lunch.”

On this hot and humid afternoon the meadow was not only sheep-less but also relatively empty.  It seemed that the shade had more appeal than the pursuit of skin cancer.

While we were sheltered under our tree we discussed the recent death of writer-director-humorist, Nora Ephron.

Me:  All that’s left is Joan Rivers and Tina Fey.

Lola: What about Kristin Wiig?

Me: Yes, I do believe I’ve just insulted her and Amy Poehler and Sarah Silverman among others.

Lola: One of my favorite books is Joan’s I Hate Everyone … Starting With Me.  The title reminds me of you.

Me:  I love that title.  I love Joan.  I feel honored that you think that.

While we were heading over to watch the players playing in the bocce ball courts, we encountered signs that free comedy was happening very near.

“Let’s find the bocce courts so we can find the comedy!”

Bocce ball is a very slow game prompting me to suggest:

Me:  This is almost as riveting as curling.

Bocce: a game that doubles as a sleep aid.

We then headed over to catch some free comedy.

The searing heat occupied the best seats, but we did stick around long enough to hear Ophira Eisenberg, a comedian that I had read about in The New York Times in April.  Getting to hear her perform her witty brand of topical standup in Central Park was very entertaining.  I particularly enjoyed her take about people getting her name wrong and guests visiting her in her fifth floor walk-up in Brooklyn gasping when they reach her door, “Do you do this every day?”  Performers like Ophira give me hope that the ranks of funny women are growing.

I left the park with Lola feeling good.  When we reached 72nd and Broadway my friend traveled south and I north.  Just as I was considering that I’m being a wimp about the heat — summer in New York can be truly wonderful, I crash landed back to reality.

Hopefully, it will cool down soon for all of us out here.