As with many people, if I had been asked on Friday, the day before the senseless shooting outside that Safeway store in Tucson, Arizona:

Asker:  “Giffords” not Gifford, and Giffords is Jewish.

Me:  Frank Gifford’s Jewish? I didn’t know that, but then again, isn’t Kathie Lee?

Asker:  Gabrielle Giffords is a congresswoman from Arizona.

Asker:  No, a moderate Democrat.  Sarah Palin put Giffords’ district on her crosshair’s map because Giffords voted for the health care bill.

Now that I am fully aware of whom Gabrielle Giffords is, she is definitely someone I like, as well as the six people that were killed and the thirteen others that sustained injuries.  I feel immense sorrow for all, and this rampage strikes me as another stain on this country that looks so trigger-happy due to another crackpot with a gun making global headlines.

As anyone with access to Facebook can see, Palin’s menacing crosshairs map is still on view, but she has yet to lower the tally from 20 to 19.  When I last checked, over 19,500 people said they liked her map.  Considering that Facebook has over 500 million active users, that number is miniscule, but it’s still disturbing.  Why is it necessary to put those districts in crosshairs?  The election is over, why must that map remain on view?  Possibly, had she taken it down six people would still be alive, thirteen others unharmed and Congresswoman Giffords would not have a Fearless Fosdick-type hole in her head today.  If she can make a full recovery from a bullet through the brain, those surgeons at University Medical Center are miracle workers.

I felt perverse pride when I heard that it was a middle-aged woman that was the first to retaliate against Jared Lee Loughner as he was trying to reload his weapon before others wrestled him to the ground.  One of the witnesses who helped subdue the suspect was Joe Zamudio.  He was in a nearby Walgreen’s when he heard the shots.  Mr. Zamudio heroically ran out of the store toward the scene of the shooting and helped apprehend Loughner. 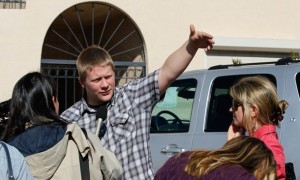 Joe Zamudio and his fifteen minutes.

On NBC’s Today Show, Mr. Zamudio volunteered to reporter Lester Holt that he was also carrying a gun.  Holt remained focused on the topic, how Loughner was captured, but I wondered:

Me:  Why would anyone need to pack heat to shop at Walgreen’s?  Are you anticipating the revolution will start while you’re buying toothpaste?

Although Mr. Zamudio helped make order out of chaos, why does anyone outside of law enforcement need to carry a gun in day-to-day life?  Wild boar are not going to roam the aisles in Walgreen’s.  Mr. Zamudio might be compelled to tell me that Congresswoman Giffords owns a Glock 9, just like the one her assailant used, but  she did not have it on her person on Saturday.

I live in New York City, very possibly the asshole capital of the country.  Assholes are everywhere I go — the subway is full of jerks, the movies and theaters constantly have someone talking aloud or surfing the web on their cell phone; my market, Fairway, is unpleasantly crowded, nasty and aggressive; my workplace is home to bipolar Accounting and Production department managers that are forever plotting and detonating; my petty tyrant landlady is currently petitioning to raise my rent $1.77 for a heating valve she never installed in my apartment.

Yet, as much as I loathe the many idiots I encounter in daily life, it never occurs to me that I need to bear arms to get through a day.  I have issues with the government, particularly the Republican congress and the Tea Party, but I’m not going to go on a shooting spree because my side lost last November’s election.   Furthermore, if my landlady, my company’s managerial morons, the distracting dolts perusing the Internet on their cell phones during a film or a play, and the guy on the subway breathing heavily on me while reeking of stale cigarettes and payday Friday beer, all happened to fall into an open pit in unison, I wouldn’t weep, but I would never be compelled to be their judge, jury and executioner, either.  Instead of giving them a shove, I would probably say:

Me:  Watch out for that pit.

The express to China

I hope something good comes out of this tragedy, but I’m doubtful that it will.  Soon, it will be a return to hate-speeches and during the 2012 election season more negative campaigning.  Yet, I think the proliferation of available guns landing in the wrong hands is at the heart of what happened in Tucson, and it appears that this wingnut, Loughner, was influenced by the steady stream of vitriol spewed by the more incendiary fringe members of our society.  They inspire the weakest links to take deranged action, and the rest of us to feel outrage.