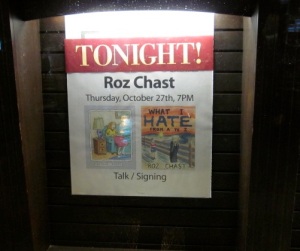 A few days before the recent freak “What the hell is this snow in October and who ever dreamt of a white Halloween” snowstorm that blanketed The Big Apple this weekend [pause for breath and now, continue], Coco and I hightailed up to my neighborhood Barnes and Noble to attend the appearance by Roz Chast, the terrific cartoonist for The New Yorker.  Thanks to Roz, the mastermind behind Stranger’s Day, I made a complete fool of myself this past August 24th.  Roz is currently shilling her latest book What I Hate from A to Z.

Me:  Gee, Coke, I bet you could have written a book with that same title.

Coco and I arrived separately.  I get out of work a half hour earlier than my buddy.  She had had a stressful day and told me to get to the store first and get seats.  She needed some chill time and wanted to ride the uptown subway train alone.  I understood completely.  When Coco arrived I could tell from the corner of my eye that the train ride had not worked its magic.

Coco (expressionless):  I was stuck riding the train with Under Ling.

Under Ling is my video game loving colleague, but unlike other gaming nerds, she has a personality and the gift of gab.  Coco has also endeared herself to Under Ling because she often feeds her snacks.  Unfortunately, Coco did not have a cookie on her person to make Under Ling disappear.  Hence, when she joined me, my pal was still in a foul mood.  As a woman sitting near us continuously dry hacked, and someone else heavily phlegm-fill coughed, I made a feeble effort to comfort my still-steaming friend:

Me:  You’ll drink a martini afterward and relax.

Coco: I need a vodka just to sanitize this place.

Coco surveyed the room and realized that she was the only person in the audience with fashion sense.  A cop approached a particularly disheveled man.

Coco:  If that cop’s the fashion police, it’s gonna be a busy night of ticket writing.

Coco gives me the stink eye. The woman sitting next to me, whom Coco has determined is named Sonya, seems to be calling everyone in her iPhone’s phone book.  As Sonya is speaking rather loudly about Roz’s new book she announces:

Sonya:  This is a good gift for Emma!

Coco:  Call her and tell her!

Before Sonya or any of the coughers beat us, Roz arrives, conducts a slide show and gives a talk.  Coco finally relaxes and starts laughing. 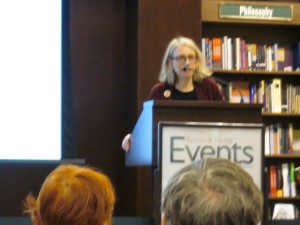 Terrible picture of Roz at lectern.

Roz opened her talk with reminiscences about her childhood in Brooklyn, reading the Merke Manual at age nine and reflecting on what the adults around her were prone to say before showing an assortment of her clever and witty cartoons. 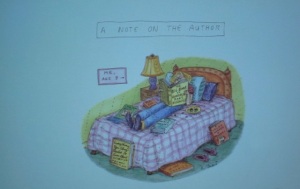 Self portrait at age 9 reading "The Big Book of Horrible Rare Diseases". 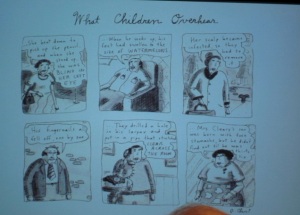 Little flesh-colored blob at bottom of frame is a chap's bald dome. 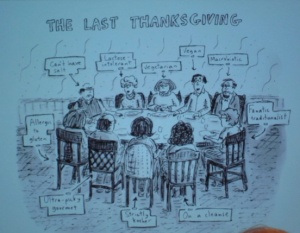 This could also be my family at Xmas. 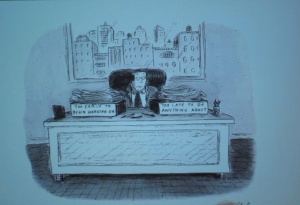 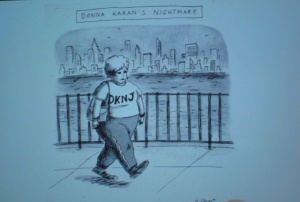 This one elicited quite a laugh from the Upper West Side audience. 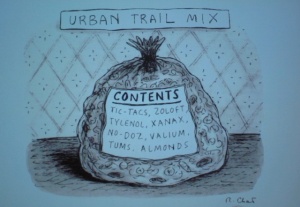 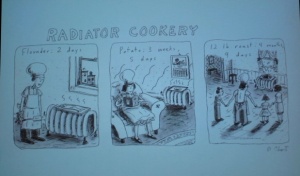 Hey, that's my radiator, too! I'll try baking cookies on it. 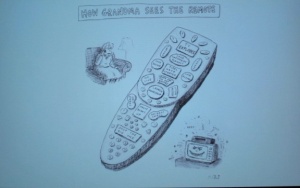 Could double as my Dad's remote. 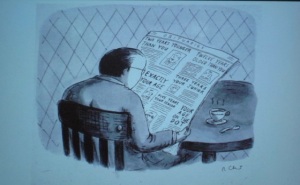 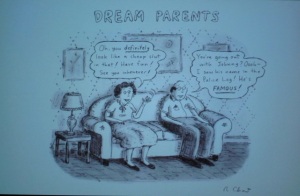 This one scored quite a hit with Coco.

Roz shared with us that her major influences included the cartoonist, Charles Addams, and Mad Magazine, a magazine I enjoyed immensely in my youth even though my mother promised that my allegiance to it would guarantee failure.  Obviously, Roz skipped taking a ride on that bus, but I … <sigh> 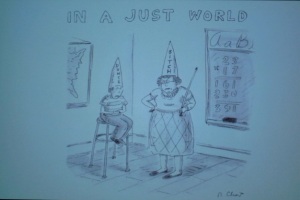 Roz, who is one of the forty cartoonists at The New Yorker under contract, shared with us the selection process.  Even though she has had approximately 800 cartoons published since 1978, there is not a guarantee that her submissions will be selected for publication. The competition is stiff.  She said that “a few hundred” cartoons are submitted every week for the 15-20 publication slots. 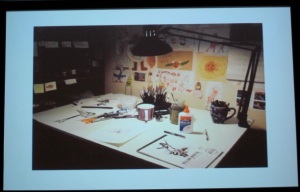 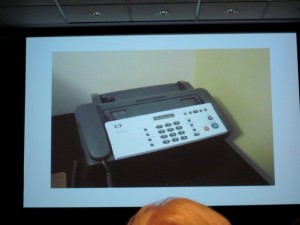 The fax machine Roz uses to submit her cartoons. 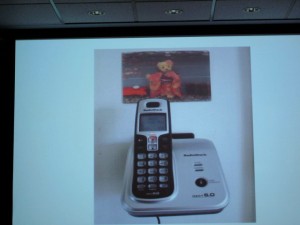 The phone Roz uses when she makes "the call of pain" to learn the status of her submissions. 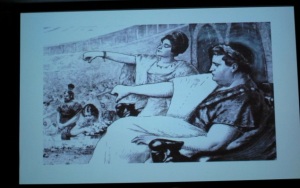 During the Q&A an audience member asked Roz what was her most satisfying professional cartoon sale.

Roz: The first cartoon I sold to The New Yorker and the last.

I imagine this cartoon below was pretty special to her, too, even though her parents thought the man was a doctor lecturing about all the bad artery clogging food emanating from ice cream, not quite what Roz had in mind. 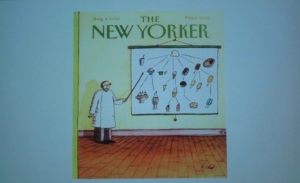 Even though she knows she’s a professional cartoonist she added:

Roz: I feel cautiously anxious about it. 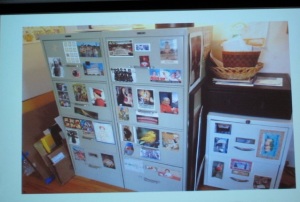 Someone else asked how she might express herself if she wasn’t a cartoonist.  After some thought, she said: 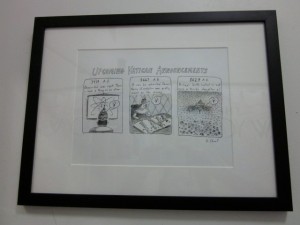 Upcoming Vatican Announcements - the Roz print in my bathroom.