Lame Adventure 325: Hanging Out in My Back Yard

I reside in an apartment in a Manhattan brownstone that is so rustic, I suspect that it was built shortly after the pilgrims dropped anchor at Plymouth Rock.  This past Saturday was possibly the best weather day of 2012, a day that was sunny and warm, with little humidity.  It followed an evening so cool and comfortable I entered a coma in my air condition-less hovel where I soundly slept twelve hours straight. I celebrated the advent of this glorious day by doing what else?  I purchased a tube of toothpaste.

Keep it simple.  Pass on complicated.

After completing my errand, I had no desire to return home.  I was feeling uncharacteristically nature-y having had my first good night’s sleep in a month.  Therefore I decided to hang out in my back yard, a place that is walking distance from my sanctum sanctorum, Central Park.

I walked up West 73rd Street where I indulged my Vespa fetish when I saw a lovely red one with a very cool black and red saddle. 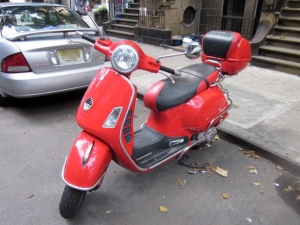 Let’s go out on a date.  You do the driving.

Across the street stood the Dakota where Roman Polanski filmed Rosemary’s Baby in 1967. 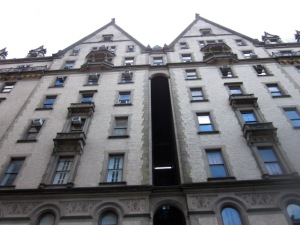 Back door view of the Dakota.

The Dakota’s fence — a fence on steroids.

I enter through the West 72nd Street entrance and walk a narrow path where I see this tree.

Me (and you):  Is this a Juniperus virginiana?

Our guess is on the money!

I walk further and see what I am quite sure is People-us On-a-rock-ana but I do not encounter a sign so I have to rely on my stellar powers of perception.

To my left is a whole helluva lotta green.

Want green and leafy? You’re in the right place.

To my right I see a cart full of plants. 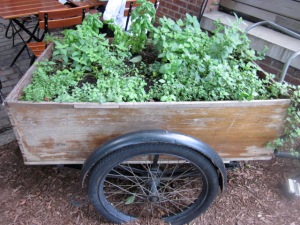 Sheep Meadow is significantly more populated this day than it was when I last visited two weeks ago under a sweltering sun. 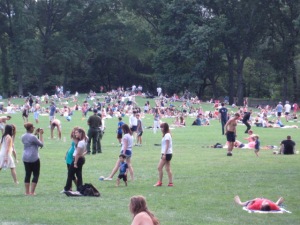 In fact the weather was so lovely it was possible to take a leisurely stroll in a black suit. 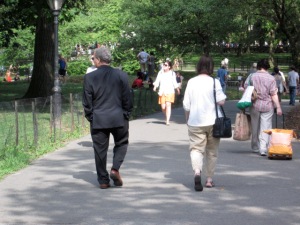 For an encore, don’t think about wearing a turtleneck.

I headed over to see the roller bladers showing off. 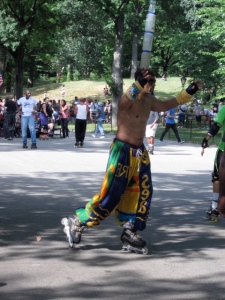 Anyone lose a water bottle?

This guy with all the joint protection was very good, not that it’s apparent in this picture.

This guy that looked like an accountant had great moves completely unapparent in this picture.

These guys are not performing a bro-dance with each other, even though this picture gives that false impression.

This may look like a pas de deux on skates but it’s not.

It’s even possible that this was the first and last time they ever met.

On my way to the band shell, I walked past statues of Victor Herbert, an early 20th Century composer, and Beethoven with a nymph, possibly symbolizing a 19th Century groupie.

This guy was The Man in the early 20th Century. 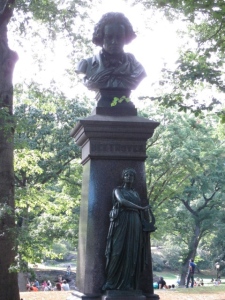 Beethoven remains the man in this century.

I also encountered a quartet of modern day musicians that sounded great. 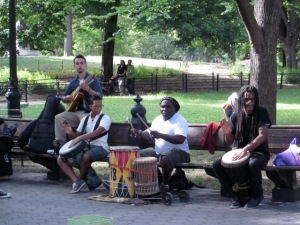 There was a crowd gathered in front of the band shell.

Hm, what’s going on over here?

They were watching these very acrobatic dudes showing off impressively.

I’ll attempt doing this in my next life.

They asked two boys in the audience to participate. 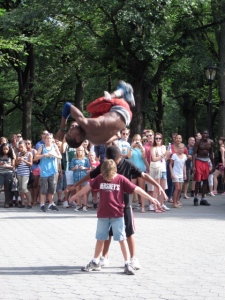 How was your visit to Central Park Young Fella? Okay, some guy jumped over my head.

Then, they resumed their acrobatics

Easy for him to do!

I popped an Aleve and moved on where I next encountered the soap bubble dude.

I made my way over to Bethesda Fountain.

I was not alone.

As did the professional photographers.

This guy was in a world of his own doing yoga moves.

Maybe he’s listening to Victor Herbert on his headphones. 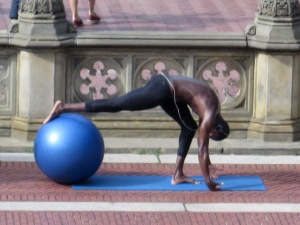 A surefire way for me to pull a hamstring. 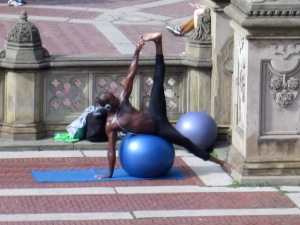 If I tried this I’m sure I’d bounce off the ball.

Me (thinking):  Now I’ve seen everything … and a gondola?  Am I in Venice?

The boaters were heading towards the boathouse where I’ve been known to pound a beverage from time to time. (hiccup) 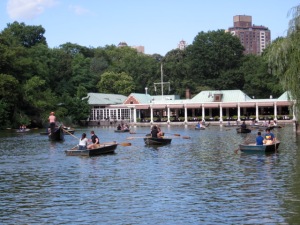 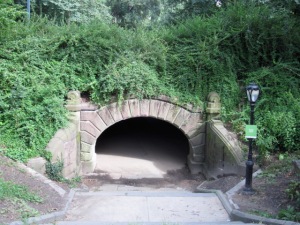 I did not walk under it.  Instead I headed for the Ramble, a place that in the not too distant past was notorious for gay male cruising.

Now it’s considered one of the top bird-watching locations in the US.

All I encountered was a guy serenading his girlfriend with his guitar, a squirrel and one lone robin. 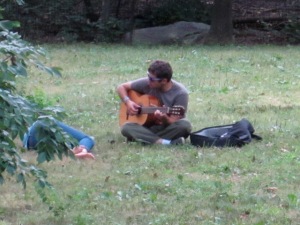 “Hurry up, photograph me, I’m on the hunt for dinner!”

“Whatever you do, don’t make me look fat.”

I could hear a chorus of birds singing in the branches, but I couldn’t see any of them.

“Hey, if anyone wants to show up for a picture, I’ll send you copies!”

So I photographed a squashed orange safety cone and moved on.

I agree. Not the most photogenic sight.

I then walked down a dirt path, not one of my favorite things in life, since I much prefer concrete and real stairs or an escalator.

The path led straight to the mouth of the lake but I firmly planted my foot to ensure I would not belly flop into it. 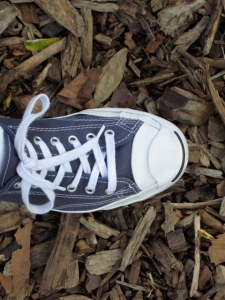 Boaters enjoying their idyll as city waits in the background.

I resumed my hike and saw some flora the botanist in me called the ouchy pointy plant.

Trip and fall into this might feel equal to embracing a porcupine.

I also encountered that robin again for I am sure that’s the sole robin in this 1.3 square mile park. 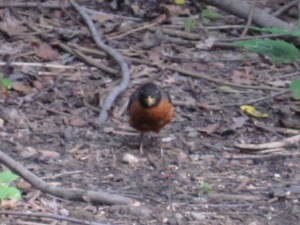 You can’t be serious.

I saw a stream.

Or is this a babbling brook?

And Turtle Pond, the place where there’s all you can eat green algae.

What a time to be without a spork!

I saw the Swedish Cottage Marionette Theatre, something I had no idea existed – puppets in my back yard!

Swedish puppets only steps away from my humble abode!

I walked past Shakespeare’s Garden, not that the Bard ever saw this patch of foliage himself.

Greens for the Bard.

The Delacorte Theater where free Shakespeare in the Park is staged was doing sound checks.

Terrific outdoor free theater — if you can get a ticket.

Hey Romeo & Juliet, get a room!

Don’t mess with this guy.

Meanwhile more fresh air lovers were hanging out on the Great Lawn. 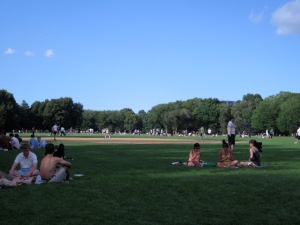 I hope whoever is assigned to mow it has access to a lawn tractor.

The ducks were taking it easy, too.

We love this weather and, oh yeah, quack.

So were the turtles in Turtle Pond.

“MIchael Phelps has nothing on me!”

Here’s Belvedere Castle, no big city park is complete without its castle. 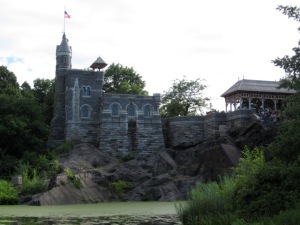 Just a castle in the big city.

Then I headed home to brush my teeth.