Although I generally avoid classical music and I am not much of a fan of ballet, there are exceptions.  For example, when Albee and I saw Darren Aronofsky’s sensational new film, Black Swan, I realized that I am not only familiar with Tchaikovsky’s score, but I like it very much.  Since I am essentially a classical music ignoramus, I will admit that when I heard the score to Swan Lake in the film, I had a daylight moment and thought to myself, “Oh, so that’s Swan Lake!”  I would not have had the same dunderheaded response to any classic rock song on the Rolling Stones’ Exiles on Main Street, a recording I know well almost from the day of its release.

Recently, I volunteer ushered an Obie-award winning show called Three Pianos that’s currently in previews at the New York Theater Workshop.  The New York Times aptly refers to this unique production based on composer Franz Schubert’s depressing 24-song cycle Winterreise as “a rowdy mash note to Schubert.”  This mostly dreary song cycle by itself might make one want to stick his or her head in the oven, nor did I find any of it recognizable as I did Tchaikovsky.  Fortunately, the energetic trio that are the masterminds behind and in front of this production — the creators, Rick Burkhardt, Alec Duffy, and Dave Malloy are also the cast, do their best to discourage audience casualties.  What they do is they start pouring wine for theatergoers as soon as they enter the auditorium.

The intention of this boisterous, high-energy production is to make the audience feel like they’re watching an informal Schubertiade (an event celebrating Schubert’s music).  Even for those that do not share the cast’s deep affinity for this 19th Century Viennese composer, it’s very easy to acquire at least a little buzz in exchange for showing up and sticking around.  At the conclusion, I noticed that many members of the audience exited smiling, and a few seemed to have the wobbles.

If you’re someone closed off to the idiosyncrasies of unconventional theater and you do not have any affinity for classical music whatsoever, you might still race for the exits on this one.  That was exactly what one of my fellow ushers, M, did.  In the two years that I’ve volunteer ushered several off-Broadway plays, I’ve never been in a situation where my co-usher walked out.  I did not know what to think, but I recalled that she had no problem pounding three glasses of wine she declared was not very good before the show started.  Therefore, when she took off, I initially thought that possibly she had escaped to vomit.  Yet, she not only seemed perfectly sober, but completely appalled, when we both noticed an audience member, Happy Man, a burly bearded fellow who was feeling immense joie de vivre, forgo the plastic cup he received upon entering the theater lobby, to drink his complimentary wine straight from the bottle.  Terra Fossil Wines, you have at least one ardent fan.

M returned to participate in the clean up.  She explained to me, “I couldn’t take it anymore.”  She said she left to take a walk.  I presume that the sounds of Schubert were not playing on the iPod in her head, but I resisted asking. 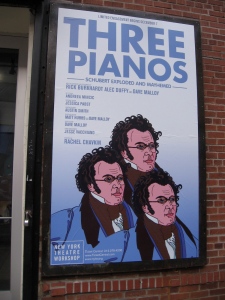 Schubert lives in the NYTW!