It seems perversely fitting that on the day after Steve Jobs buys his rainbow, Milton and I are attending a screening of a film at the New York Film Festival called Melancholia.  Written and directed by Lars von Trier, this is a story about the end of the world.  At this moment, many Mac devotees including myself felt that the world had ended a bit when we learned that Steve had checked out.   Milton has an iPhone, his first taste of Mac hardware but his Dell desktop has often been the bane of his existence prompting me to bark:

On cue, he will grouse about having just paid off his PC, and I will issue my usual taunt:

Me:  Once you have Mac you’ll never go back.

Milton and I had not planned on attending any NYFF screenings of films with distribution, but we both highly regretted not bending our rule for the latest from reliably controversial Lars.  When Melancholia played Cannes last spring, word spread fast that it was one of his best films thus far in his career.  Then he blew all the great press devoted to his work by suffering diarrhea of the mouth at a post-screening press conference when he went on a stream-of-consciousness tangent about Nazis, Jews, being a Nazi, etc.  This stupidity quickly got him ejected from the festival.  Do I think he’s a Nazi?  No.  Do I think he was the king of self-destruction at that press conference?  To get vomitously Sarah Palin here, “You betcha!”  Lars might be the type that recoils from admiration and approval.  Yet, I have no interest in playing Sigmund Fraud (sic) about his psychologically.  Everyone has demons, but most of us keep them under wraps in public or at least when cameras, microphones, and hundreds of reporters are present.

We knew that the Melancholia screening was sold out, but Film Society member Milton visited the box office and asked if any seats were available.  The ticket seller took pity on him and sold him a pair (at his member discount rate) of center section seats in row G; a row that Milton is now referring to as “Row Good.” 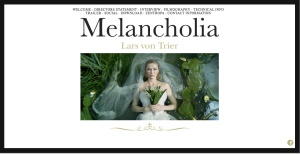 An image that probably sends chills up Vera Wang's spine.

This cosmic tale is as beautiful as it is bleak.  The story opens with a brilliant prologue depicting mini-scenes of destruction leading up to the grand kahuna of “holy crap, did we see what we just saw” moments  while music from Wagner’s Tristan and Isolde graces the soundtrack.  The prologue segues into the first part of the film called Justine.  Kirsten Dunst plays Justine, a new bride who arrives two hours late with her groom, Michael (Alexander Skarsgard), to their wedding reception held at her sister Claire’s lavish mansion.  A two-word description of the wedding reception is ‘emotional disaster’ as Claire (Charlotte Gainsbourg delivering yet another pitch-perfect performance), struggles to make this toxic celebration a success.  Unfortunately, she is fighting an impossible battle with forces beyond her control including her bitter divorced mother (Charlotte Rampling) delivering a speech so withering I became infected with Milton’s giggles.  The foremost force that resists Claire’s good intentions is Justine, who grows increasingly detached from her own party to a socially suicidal degree.

The second part is called Claire, the sister that is fighting hard to maintain some semblance of normalcy in the life she shares with her husband and young son, a tall order to fill since psychopathic Justine is around.  The film unfolds with a sense of calm, but as worried Claire’s anxiety about the fate of the world as a rogue planet approaches escalates, Justine, who has a premonition of what’s to come, seems at peace.  Meanwhile, Claire grows increasingly unhinged and considering the circumsances, who the hell wouldn’t?

If there is a recurring theme throughout the entirety of the film it’s one of hopelessness.  In the world according to Lars it seems that no matter how hard we try to make things right, to play by life’s rules, to be prepared in the event of an emergency, or even if we consciously stop trying at all, either way it doesn’t matter what we do.  Forces beyond our control are out there that are going to crush us one way or another.   On the upside, this makes me feel a lot less lousy about my inability to get out of bed to get to work on time.

As the ending credits rolled, many audience members sat in a daze.   This thought provoking highly original work is going to stick in our heads quite a while.