The other night I almost killed Milton by accident.  He, Elaine and I went to BAM (the Brooklyn Academy of Music for non-New Yorkers) to see a new translation (by David Greig) of August Strindberg’s play Creditors directed by Alan Rickman (or Snade to Harry Potter film fans).  Even though I’ve yet to cross the pond to London, it’s very convenient that this Donmar Warehouse production is currently being staged in Brooklyn.  The play stars the original British cast:  Tom Burke, Anna Chancellor, and Owen Teale.

Last month, Milton received an email for discounted tickets ranging in price from $18.75 for gallery seats to $56.25 for orchestra.  Since our means are rather modest, everyone was on board to go for the cheap seats.  Center section row B seats 103, 104, 105 looked like a good view to me.  Milton’s only demand was that I make sure we were not in an obstructed view area where we might find ourselves watching the production through a pillar.  All indications were that these seats were full view, and that was indeed the case.

What was not indicated was that we had to literally climb the stairway to heaven to reach the gallery.  When we entered BAM’s Harvey Theater, we were immediately told we had to use a side entrance or as Elaine quipped, “The servants’ entrance.”  When we rounded the corner to the entrance for the cheap seats (the factual name for the gallery), the three of us looked up at the steepest, longest and most daunting staircase of our lives.  Plus, we had each just ingested substantial burgers at 67 Burger.  The view alone was enough to make my silent GERD* scream. 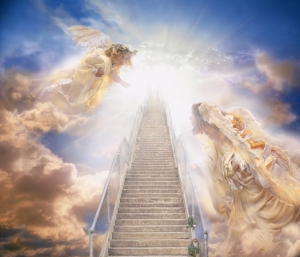 Now it can be told, Led Zeppelin was singing about the Harvey Theater staircase!

I started climbing followed by Milton and Elaine.  Elaine bolstered Milton who began complaining loudly by the third step (only 97 to go buddy!).  To distract him from this slice of Everest in Brooklyn, she told him about having to scale five flights daily to reach our department.  As we approached the top, Milton gasped, “Death!”

We were so high up, our next stop was surely the moon.  Then, we had to walk down half a flight to our second row seats that a woman on Flickr described as “the most uncomfortable ever.”  A fairly apt description.  They were hard elevated stools that looked straight down at the stage at a terrifying angle. 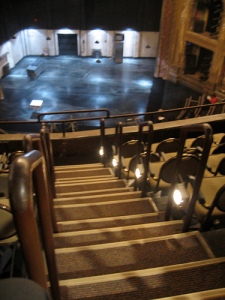 While Elaine and I were trampling over one another, Milton announced, “Either a heart attack or my vertigo’s going to kill me right now.”   It was quite a scary view.  Had we been in row A, Milton might have tumbled over the railing, with me following as I tried to clutch his ankle and Elaine going down with both of us as she grabbed hold of mine.  As she likes to say, “One for all, and all for one!”  Then the three of us sail headfirst into the swells in orchestra. 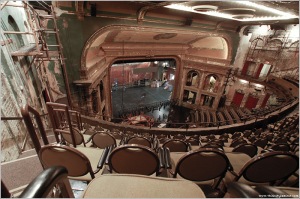 Fortunately, we remained seated, but the woman sitting behind us chattering endlessly about the height of the view did not provide the distraction Milton needed to maintain his rapidly diminishing sanity.  To pass the time until curtain, we discussed applause etiquette in London versus New York.  Elaine claims that applause in her homeland is scant compared to here where we applaud every entrance, exit, encore and usher.  Milton is certain that there are paid clappers at most Broadway shows.  Nice work if you can get it.  (If there is anyone out there who pays clappers, I’m available.)  I asked Elaine if UK theatergoers let loose at the end of the show.  She said, “Not like over here.  It’s some polite clapping, but they’d probably kick you out if you applaud over there like we do over here.”  Well, we are the country that stages critically acclaimed shows with names like American Idiot.

Finally, the lights lowered, and the play started with the sounds of the seaside transporting us back in time to a resort in late 19th century Sweden.  Quickly, this riveting tale of obsession, revenge, lust and rage, or all the emotions that make life interesting, unfolds.  Within ten minutes, Milton loosened his grip on his armrest.  The protagonist’s motives in this cat(s) and mouse study are cleverly revealed in the span of ninety intermission-less minutes.  At the end I felt as devastated as the victims.  Following the cast returning for four curtain calls to screams of praise and thunderous applause, the lights came up, Milton’s vertigo returned, Elaine assured him that walking down the stairway back to earth would be easier than the climb up, and I promised that I would take a blood oath and will never again subject him to another play while sitting in the clouds.  Yet, if you are like us and can only afford the cheap seats, the air in the gallery might be thin, but the action on the stage is so brilliant, it’s well worth the hike. 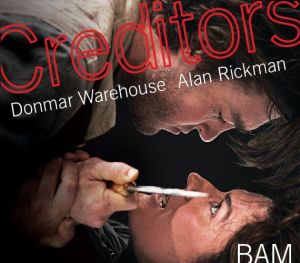 *Chronic acid reflux with no noticeable symptoms unless when looking up a mile long staircase.