Saturday afternoon, I was running an errand in windblown Times Square, a place I consider a glaring monument to slow-moving tourists and sensory assaulting advertising that I generally loathe.  After completing my task, as I was walking east on 42nd Street toward Broadway, I noticed a very eye-catching billboard advertising the new Mini Countryman.  The vehicle on that billboard is a full-size fiberglass replica of the actual car.  I slammed on my own brakes, whipped out my camera and took a picture. 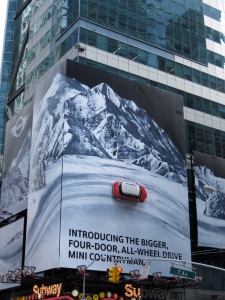 Mounted with gallons of Gorilla Glue.

Apparently the snow-capped panels encircle the block.  I found out later that there’s a second Mini Countryman in blue on the other side.

I debated returning and shooting more pictures, but I hate Times Square a little less that the thought of finding myself growing a tumor.  Plus, I have a quibble with the billboard.  If Mini’s goal is full-on ostentation, go full on!  I am sure they’ve spent the equivalent of a small nation’s GDP on that display.

Therefore, what would be coolest of all is if both vehicles perpetually drove around the block of billboards.  Of course that might further slow down traffic and increase the cluster of tourists clogging the already crowded streets.