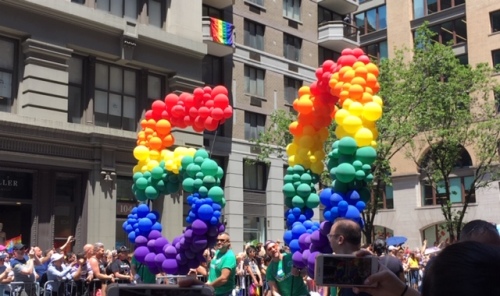 With my friend, Milton, I attended Worldwide Pride, an honor bestowed on New York City to coincide with the fiftieth anniversary of the Stonewall uprising that occurred on June 28, 1969. This event was spearheaded when a courageous group of LGBT people was congregating at the Stonewall Inn in Greenwich Village. They reached a boiling point because the NYPD conducted yet another raid. The Stonewall patrons, fed up with police harassment, retaliated against the cops for days, furious that the police could invade their space at will.

A member of New York’s Finest circa 2019. Milton loved her hair.

The Stonewall uprising is seen as the birth of the gay rights movement, what is now known as LGBTQ Pride. Unrelated, June 28th is also Milton’s birthday, but in 1969 he was seven, and living in Iowa. I happened to be ten and living in San Francisco. It would be 35 years before a completely un-seminal event in LGBTQ history would occur: Milton and I would cross paths here in New York City and become great buds. The only downside to him being male and me, female, is that sometimes people erroneously assume we must be straight, and even more insulting, married. Aghast, Milton has wondered aloud:

Milton and I skipped Pride in 2017 and 2018 because in 2017, I had just started a Serious New Job and had anxiety being utterly clueless about the industry I had entered. In 2018, he had a sore knee; standing for long hours was out of the question for him. By 2019, I’ve re-mastered the art of being busy while bored at work and after investing mega hours at the gym Milton can stand again, so hey: 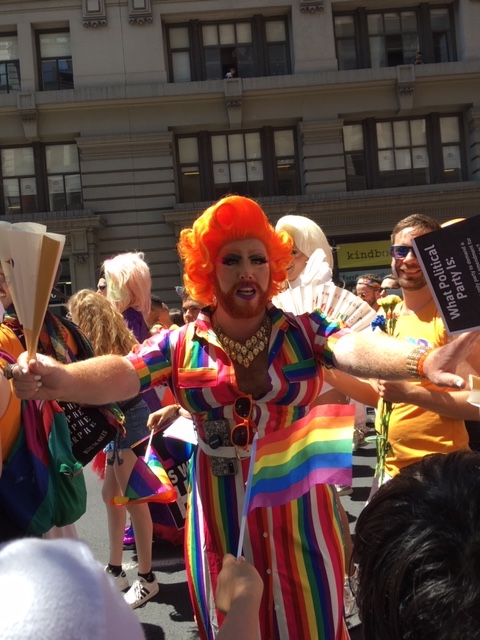 Happy to see you!

Unlike years past, we did not take hundreds of pictures this time. Milton could not find his camera’s charger, but he located an errant grape when we reached Fifth Avenue. He stepped on it promptly. It remained crushed and slippery under his sneaker for the entirety of our stay. He declared that he hated that grape as much as a certain politician that will remain unnamed.

Fortunately, we achieved our goal: we stood and watched Worldwide Pride unfold for a few glorious hours while basking in the energy of the crowd on a near idyllic summer’s day. When the countdown clock exceeded three hours I felt on the verge of collapse, so we continued celebrating with frosty libations at a nearby watering hole that had Pride tuned into every widescreen TV. You could not escape the festivities and that was wonderful.

These stilts were made for walkin’. Who knew?

This entry was posted in Humor and tagged LGBTQ, new york city, Worldpride. Bookmark the permalink.

33 responses to “Lame Adventure 475: Worldwide Pride, Milton and Me”