Last week was not one of my better weeks, not to imply that anything monumentally terrible happened, but if a week could be an object, last week would have been a constant pebble in my sneaker. Every subway ride into The Grind, and most rides out, were densely crowded. I had backpacks in my face. 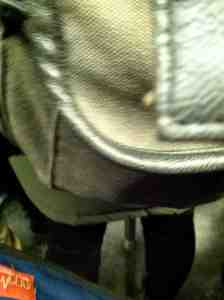 If only I could heavily sneeze on cue.

An arrogant woman simply sit her name brand hand bag on me. 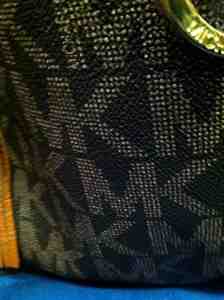 So close I could have bitten into it.

At work, in a moment of sky-high frustration, I asked The Boss, Elspeth:

Me: Where’s The Departmental Knife?

I wanted to slice a pear. She looked befuddled as if I had asked:

Me: Where’s The Departmental Lawnmower?

We have a single communal serrated knife in the entire Design department. It’s about 65-years-old and once belonged to Elspeth’s mother. We’re minimalists when it comes to flatware. I found it sitting on a desk. My palpitations subsided. 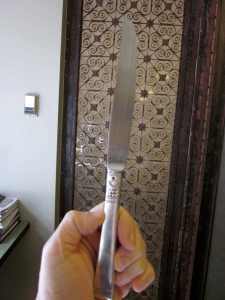 But the most exasperating aspect of last week was that my colleague, Godsend, was completely flattened by the flu. With Godsend missing in action, I had to fill in and run errands that included visiting the Third Circle of Hell, a.k.a. the Canal Street Post Office. This is a dreary, puke pink colored building staffed by some of the most miserable malcontents in New York City. 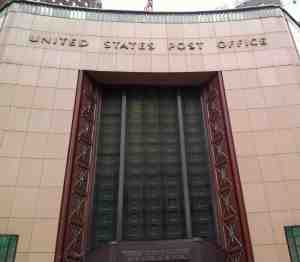 Last month, The Boss had us purchase six coils of 34-cent stamps for a postcard mailing. I warned Godsend that these misanthropes might give her a hard time. 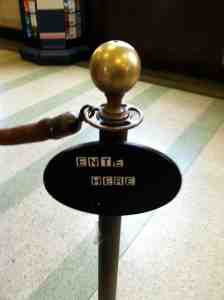 Low tech greeting inside the Third Circle of Hell.

Me: They’re so incompetent they might not even know what you’re asking for. Or they might only have three coils and they’ll load you up with 300 more stamps in sheets, or to be asswipes, 600 loose stamps. Prepare for anything. They’re jerks.

Godsend went out, armed with $205 in cash. Twenty minutes later she returned with six coils of 34-cent stamps, one paper dollar in change (as opposed to 55 pennies, seven nickels and a dime) and proclaimed:

Godsend: They were nice!

In the weeks that followed we had to do a massive catalogue mailing. After we sent the catalogues in bulk, we started mailing them piecemeal. In those cases, a member of our accounting staff applied postage from the company meter to the package and Godsend hightailed over to the Canal Street Post Office where she made the drop off and got a tracking number. Every time when she returned she announced:

Godsend: They were nice!

With Godsend out sick, I had to run this errand. That’s when I meet Clerk 03, a sour woman about my own age. I have three pre-posted catalogues. She barks:

Me: I want to send these packages Priority and I need tracking numbers. They’re all pre-posted.

She looks at the first package, shoves it back at me and sneers:

Clerk 03: You gotta take this back to wherever you came from.

Me: What’s the matter?

The meter strip is indeed dated the day before. I also know that we sent out over 200 of these packages with meter strips dated the day before. They were all accepted without question and apparently whenever Godsend dropped them off, she was always greeted with a big wet kiss. I instinctively hate Clerk 03’s guts, but I know that this petty bureaucrat is setting me up. She is itching for a fight.

Me (calmly): Is it really necessary that I walk all the way back to my office?

Another Clerk: You can mail it. Drop it in the box over there. We’ll give you a Priority sticker.

Clerk 03 shoots laser beams out of her eyes at Another Clerk and throws a Priority sticker at me. I hand her my next package. This infuriates her.

Clerk 03: Don’t you get it that I can’t be bothered with that if it’s dated yesterday?

Me: These other two are dated today.

Clerk 03: You better be right about that.

I was, but what if I was mistaken? Was she going to have me taken in the back and executed?  She gave me the tracking numbers I needed without more guff. Before leaving her window, she urged me to take a survey about my visit. It took all of my power of self-control to mute what I was thinking:

Me: I will enthusiastically award your service five middle fingers.

On Friday, spring arrived. Of course, it snowed. Even Mother Nature’s a jerk. 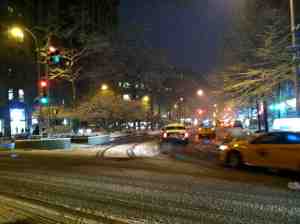