Now that my father is no longer walking the earth this holiday season, my family is reduced to its essence: my siblings, Dovima and Axel, brother-in-law Herb (with a silent h), and my college student niece, Sweet Pea. There are also the animals: Dovima’s dog, Thurber, Fred, her geriatric fish (he’s 9; a year older than Thurber), and Axel’s two cats: Blackie, the feral guard-cat at work, and Bandit, the pampered, at home. Seven of the eight rate holiday gifts from me. 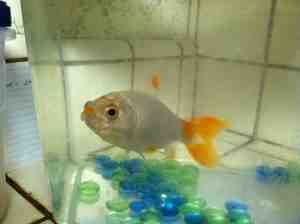 I am famous for saying:

Me: If I can’t get it online, you’re not going to get it from me.

I like fast. I like simple. If I must go to a store, as I did for my sister and Herb’s presents, I go at off hours when I know the crowds will be just the way I like them: anemic. After I exited The Grind on Friday, I blew into a store, found exactly what I wanted to get my sister and brother-in-law, paid, and was back out on the street in six minutes flat Toyota jumping for joy. Almost immediately, I suffered a flash of five alarm fire, heart attack-inducing panic. That was because I brilliantly left their gifts in a convenience store aisle when I absently put the bag down to pick up an eight pack of pocket tissues. Then, I walked away. I made it back to get their presents before the four second window of retrieval granted to preoccupied stumblebums had slammed shut.

On Saturday, I shipped my gifts to my sister’s house on the West Coast. I’ll wrap them during my upcoming visit. The gifts that I’ve ordered online are being shipped directly to her; how I’ve been sending my gifts for years.

Now that Trader Joe’s Brandy Bean season is over, and with necessity being the mother of invention, I rewarded my gift giving accomplishment with a bottle of port and a chocolate bar.

Happy holidays to me!

As I was entering my building with my treats, I noticed a tire pump outside the door. 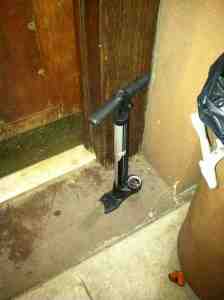 Home is where the tire pump is.

Me (thinking): My building: the gift that never stops giving.

Once again some nameless tenant, possibly the one who places the cardboard pizza boxes in the recycling can meant for plastic and glass, left this hand me down up for grabs.

Does this person also wear their shoes on the wrong feet?

If I were inclined to be Tightwad Incarnate to those near and dear, based on what tenants have left on my building’s radiator cover through the years, there are many offerings I could have given.  I occasionally photograph them. Pictured below is a selection. Often, there are books and magazines. Sometimes, appliances, including computer hardware. Once, a glove I lost was left there and once, I placed a glove I found on there. Hey, pay the good deed forward. With great regret, I did not photograph the samurai sword someone left in the trash a few years back, but that artifact from feudal Japan, or more likely, China via a Canal Street junk store, was not gracing the radiator cover.

This is the radiator cover as it is seldom seen: naked.

Here it is with a trinity of plastic What The Hells possibly produced by Acme.

Acme What The Hells. But anyone’s for the taking.

Currently, there’s a soup pot up for adoption.

And a calendar with both November and maybe December!

In September 2012 there was an empty binder and card stock. 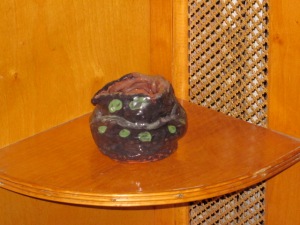 A month later, there was this glazed ceramic blob. 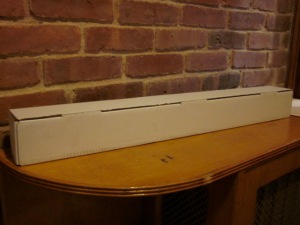 One summer there was The Mystery Box. It sat around for about a week screaming volumes about the lack of curiosity amongst the tenants.

Magazine paper wrapped boxes that sat in the vestibule last spring. A few were taken by some schmuck or schmuck-ette addicted to clutter.

The annual Christmas tree that makes my friend Milton’s heart melt as if it’s a puppy. But I think taking it is theft.