Lame Adventure 422: Eulogy for The Flusher

The Flusher was not the type of tenant inclined to smell the fragrant roses that bloomed last week in my apartment building’s garden. 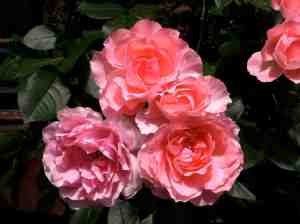 Nor was he the type who would appreciate this sign that was recently posted over our mailboxes. 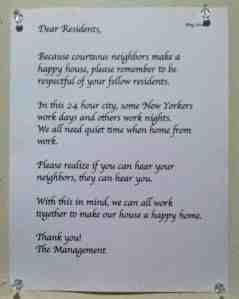 He was the antithesis of friendly, the embodiment of prickly, with an accent on the first syllable. When I first encountered him in my building’s vestibule almost 31 years ago, I was 24 and he, 42. I made the mistake of saying hi. He narrowed his eyes trying to focus on where this offensive sound had emanated even though I was standing right in front of him. His forehead looked reminiscent of a slab of slowly melting Monterey Jack. He growled with a heavy German accent:

The Flusher: Fuck you.

Contempt was not the response I was anticipating. I became friends with The Flusher’s next door neighbor, Paul, the tenant in 2D, or as he called it:

Paul was a kind-hearted, gay, 33-year-old photographer and my all-time favorite fellow tenant. He dished about The Flusher.

Paul: He’s the building menace. He hates everyone. He’s always threatening to shoot me. Have you heard him screaming yet?

Paul: You will — and honey, you’ll know it when you hear it.

Me: Do you ever talk to him?

Paul: I’ve only spoken six words to him in my life: shut up, shut up, you asshole.

The Flusher had been a tenant probably since the Sixties. His lease was rent controlled so what he paid in an entire year was considerably less than what other tenants pay per month. He was a solidly built, pasty white, compact man with the classic bad comb-over. He wore the same uniform every time I saw him — a short sleeve, plaid, button down shirt, faded blue jeans — about an inch and a half too short, white socks and black oxfords. When the weather was cool, he wore a black satin baseball jacket emblazoned with the New York Times logo. Paul told me that he worked at the Times.

Me: What does he do?

Around the time Paul succumbed from AIDS in 1986, The Flusher and I locked horns on a workday morning. I was blindsided when he detonated while I was doing my usual morning work-out, claiming it was too loud. This prompted him to bang on my door, ring my buzzer, call me “a fucking kike” and promise to kill me. It was surreal. It was the same workout I had been doing for years. I didn’t suddenly add a jackhammer to it. Even though I’m not Jewish, I was feeling very threatened, afraid that he might be lurking outside my door. I called the cops.

The police came quickly, a white male and a black female. I told them my side, they went down to visit The Flusher to hear his, but he wouldn’t open his door. When he finally relented and let them in, the black female cop asked:

Black Female Cop: Sir, have you been drinking?

The obvious answer was yes but he denied it. She disagreed. He disagreed back and called her the N-word. I thought for sure that they would cuff him then and there, but they didn’t. They sternly warned him to stay away from me, or face arrest. He never came banging or buzzing on my door again.

But he continued to harass other tenants. He also liked to curse loudly out his window at people in neighboring buildings who would play music at back yard gatherings in summer. After Paul died, that started a revolving door of new victims for The Flusher to antagonize. His midnight hour screaming made tenancy short for whoever took up residence next door.

As for his name, The Flusher, a friend of mine came up with that moniker ten years ago. We were having dinner when we heard my downstairs neighbor flushing his toilet incessantly.

My Friend: What the hell is going on down there?

Me: Lately, he’s been flushing his toilet non-stop. Ignore it.

But my friend decided we should call him The Flusher. It was especially irritating when he’d get on a flushing tangent while I was showering. The flush would consume all of the cold water and I risked getting scalded. It had crossed my mind that he was so full of vitriol he was doing that intentionally.

When I would see The Flusher on the street, if he were walking ahead of me, I would slow my pace. If he were walking toward me, I’d cross to the other side. As for how he walked, his body lurched forward. It was an odd gait, perfect for an odd man. I warned my friends and sleepover guests that he was bad news and they should keep their distance. Drunk or sober his usual expression was a frown. Never once do I recall seeing him smile. He was always alone.

About twenty years ago, his apartment door was open, allowing a glimpse inside. It was very dark. Hanging over the non-working fireplace mantle was a mirror with multiple cracks that extended from a bullet hole in the center. He was always threatening people with gun violence so maybe he shot his mirror.

Sometimes as I would be leaving for work, I’d see him coming home, carrying a six-pack of Budweiser.

Other times, particularly on sunny days, I’d see him out walking, carrying a slender paperback book. Possibly he had been re-reading the same novel for decades too soused to recall the story.

About a year ago, I noticed that he was looking gaunt. I suspected that he was ill. Last fall, I was going out as he was coming in. He was wearing his old black satin New York Times jacket. Normally, he would just walk by me, but this time, he waited and held the door for me. This simple act of common courtesy from someone so hostile surprised me as much as when he told me “Fuck you” thirty years earlier. I said:

Maybe that was his way of saying he was sorry that he had been a dick toward me for thirty years. Or maybe because he was sober he was just being courteous.

My building’s management discovered The Flusher dead last week on the floor of his apartment. He was 73. The tenant below reported that water was leaking. The Flusher had left his faucet running. Possibly he was too weak to resume a final hurrah of constant toilet flushing. His mail had piled in the vestibule all month, but it did not occur to anyone that he was home, gravely ill and unable to climb down the flight of stairs to get it. It seems that he has no friends or family so the police have sealed his apartment pending a routine investigation. 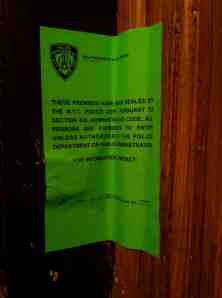 I spoke with the woman who co-manages my building about him. She is gracious and friendly. He was always nasty to her.

Co-manager: He was an old man, he was sick and he died alone. I should feel sorry for him because he was a human being, but my cat’s sick right now and I’m so worried.

Me: I’m sure your cat is a lot nicer to you than he ever was.

She asked if I remembered when I last saw The Flusher. I said I didn’t. She said that she couldn’t either, but he paid his May rent. It’s possible that was the last time he stepped out of his garret. 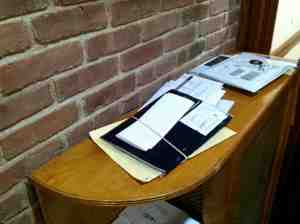 The Flusher’s pile of mail.

This pathetic misanthrope, who was loathed by every resident and building management, who suffered a lonely and agonizing death, will soon be forgotten. But that’s where Lame Adventures enters the picture. I Google searched The Flusher expecting to find nothing, but I discovered that this belligerent drunk, who was quick to spew racial slurs and seemed to detest anyone of color, LGBT or human, contributed $3,750 to the Democratic Party in 2012, including $250 to Elizabeth Warren’s campaign. I expected to discover that he was an NRA cheerleader, a white supremacist, or both. Even though I  shared two words of civility with him thirty years apart, I now know that he was not a total douche bag after all. In tribute to The Flusher, I will now flush my toilet. 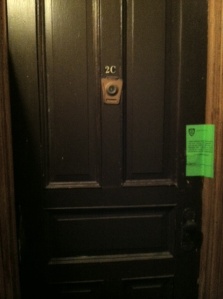 75 responses to “Lame Adventure 422: Eulogy for The Flusher”