As much as I love theater, I hate the ticket prices. But, it is my passion so I try to see as many plays as I can for bottom dollar. Volunteer ushering off-Broadway plays has allowed me to see three of the last five Pulitzer prize winning shows for free. Unfortunately, Broadway does not allow volunteer ushers. About a week ago, Milton, sent me an email asking about The Realistic Joneses a 95 minute hit comedy written by Will Eno playing on Broadway at the Lyceum Theatre. The poster features a dead squirrel lying atop a mailbox.

Is grass green, is the pope Catholic, does New York stink in summer? Sign us up! Because we are both of modest means, we agreed that we would settle for balcony seats to the tune of $39 each. We’re not wild about seeing it from the proximity of Canada, but at least we’re getting to see it. The ticket seller asked:

Me (thinking): Is this a test, should I be insulted, can she not see that I am the icon of fitness for my age demographic?

As soon as I spoke I imagined Milton screaming:

Milton: I’ve got to walk up seventy-nine fuckin’ steps?

We’re not seeing it for another month, so he has four weeks to prepare himself mentally and physically for this challenge.

As I walked past the Cort Theater, where a revival of Martin McDonagh’s The Cripple of Inishmaan starring Daniel Radcliffe, was in previews, I noticed a sign on the door announcing the $37 rush ticket policy.

I asked the ticket seller how soon one should get in line for rush tickets for weekend performances.

Ticket seller: I’d say an hour would be fine. No one is aware of the rush policy yet. The sign was just posted today.

When that play was staged in London, where it also starred Radcliffe, it was a huge hit. The run sold out. Word travels fast in New York. I had seen this play five years ago off-Broadway for free when I ushered it. I loved it. It is a black comedy set in 1934 Inishmaan, an island in Ireland, where nothing much happens. Even the gossip is dull. One day a film crew arrives. That causes tremendous excitement, but no one is more excited than Billy, the cripple in the title, whose favorite pastimes are reading and staring at cows. It’s a tale packed with idiocy, cruelty, redemption and a lot of wit. It’s a guaranteed crowd pleaser.

I had a feeling that it would get rave reviews here and then I learned that it was opening this weekend, on Sunday. Once the raves pour in, getting weekend rush tickets might require getting in line several hours in advance. The weekends are when I power sleep. So Milton took sleep deprivation upon himself and got into the rush line this past Saturday at 8:52 in the morning waiting for the box office to open at 10 am. At 10:09 am, while I was deep in REM sleep, he emailed me that we got tickets to that evening’s final preview performance at 8 pm. 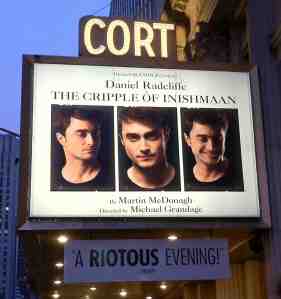 Our seats were in the center orchestra, row AA. That’s directly in front of the stage. We could almost eat the styrofoam painted to look like Inishmaan’s sea wall.

We resisted biting into the stage. We figured it does not taste like chicken.

I asked Milton what he thought the seats behind us cost.

As for the play itself, the story was as wonderful as I remembered. The supporting cast was brilliant. The way one actress repeatedly delivers the three-word line, “Not a word” blew what remains of Milton’s mind. Daniel Radcliffe was a far prettier Billy than Aaron Monaghan, who I thought was perfect in the role five years ago. Milton was impressed with Radcliffe’s gay male following in attendance, but he thought that Radcliffe was the weak link in the production. Yet, his star power guarantees box office sales. He is adequate in the role. To his credit, he doesn’t chew the scenery. Overall, we were entertained.

When we were leaving the theater, a woman who probably paid ten times what we paid for her ticket, found my iPhone. Unbeknownst to me, it had slipped out of my pocket and she noticed. Afterward, at a pub, the bartender bought us our second round of suds. Overall, it was an excellent night. The play opened on Sunday to the rave reviews I anticipated.

Bring on that dead squirrel!