Last November, I revealed that my gastroenterologist urged me to shed a bowling ball and seven bananas in weight that I gained over the course of the previous four years. One or two of you may have wondered:

One or Two Lame Adventurers: How’s that going?

I was motivated to purchase a spin bike and a package of chocolate sea salt cookies. The cookies I inhaled quickly. A few weeks after the bike arrived, I got around to assembling it. As a reward for this accomplishment, I treated myself to a box of Trader Joe’s Dark Chocolate Stars cookies. It was the holiday season, that six-week period when I am eating and drinking myself into oblivion.

When I returned to New York from a West Coast getaway on December 28th, I did a Fairway run for foodstuffs, and purchased a new slice and bake cookie they make called the Kitchen Sink. This cookie is high octane. It has everything in it — chocolate, nuts, oats, raisins and maybe even a drain. 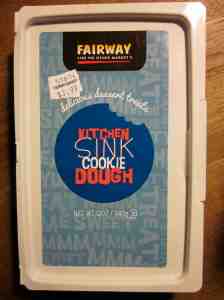 That evening, I dined with my buds, Milton and Coco. I mainlined a burger, fries and four pints of beer. The next day, Sunday, December 29th, I had a brunch date with my friend, Lola. I continued stuffing myself with gusto.

On Monday, December 30th, I glimpsed myself sideways naked. I looked like I had a baby kangaroo stuffed in my mid-section. Whatever was going on in there was nearing the point that no amount of black clothing could conceal. When I stepped on the scale the number was so sky high it was as if I was carrying the mothership kangaroo. There was no denying it: six-weeks of holiday season indulging resulted in my now having to lose an adult marsupial in weight. The time had come for me to ride that spin bike. I could no longer avoid it.

I popped in a DVD that came with the bike called Ultimate Energy. It’s described as “a fun and challenging ride while exploring the potential of your own power with smooth hills and seamless straight-aways”. It stars a Son of Stepford, an international fitness educator who never stops smiling or breaks a sweat. He doesn’t mention that if you’re middle aged and suffering late stage Fat Ass-itis, you will feel no fun — just a humiliating degree of challenge with a heaping help of suffering. When he declared in a perky tone “it’s okay to smile” as I was crying blood, I renamed this DVD Ultimate Cruelty.

When it was over, I was drenched in sweat and certain that I could never do this again for forty minutes. This bike was destined to be only a $449 clothes rack.

But, shortly afterward, the endorphins released and I felt that high I feel on those rare occasions when I have great sex i.e., coupling with someone who does not require begging from me. I thoroughly read the manual that came with the bike about dietary habits. Cookies, burgers and beer were omitted. The emphasis was on whole grains, fruit and vegetables and something that had completely escaped my mind over the course of the last four years: portion control.

I decided that it would behoove me to re-think my diet. I baked the Kitchen Sink cookies — but gave them to a guy at The Grind without eating one myself. 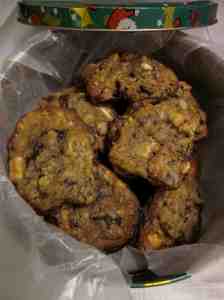 I am now eating primarily organic. It doesn’t cost much more because I’ve eliminated bagels, beer, and cookies from my shopping list. I have quit watching that Son of Stepford DVD. Apple’s iTunes Radio has a station called Rev Up that introduced me to heart rate soaring dance music rife with synthesizers and drum machines, exactly what I would have dismissed as aural pollution BS (Before Spinning). My favorite song to ride to is Maximal Crazy.

A melody as mellow as shock treatment.

Even though I no longer pound four beers in a sitting, I have not become a healthy lifestyle fanatic. When I’m dining out with friends, I don’t announce:

Me: Just water and a plate of steamed leaves for me.

When I started spinning a month and a half ago, I did it three days a week. Two weeks in, Milton encouraged me to ride every other day. Now that I feel it is less likely that I will drop dead doing this, I am going to try riding it five days a week. Even though Coco, who is a buff gym rat, wishes I’d ditch the scale; she’s an advocate of how you feel over a number, thus far, I’ve shed seven pounds. I feel much less spongy and much more solid. Best of all, I no longer look like I’m carrying a large footed beast in my guts.