Many of you were kind enough to glance at this site’s previous post about snow falling overnight in lower Manhattan. It featured some fine photography shot by longtime Lame Adventurer, my bud, Coco. After Hercules left town and Friday turned frigid cold, Coco ventured out again. Pictured below are photos of post-blizzard lower Manhattan in the light of day. 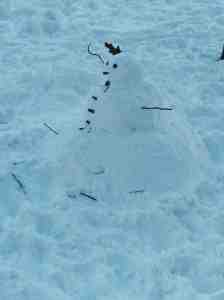 The obesity epidemic extends to snowmen. 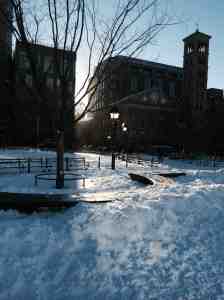 Fluffy white snow I fantasized about when I was growing up in San Francisco. I should have been on medication.

On Sunday, two days after Hercules bolted, I received the following text from Coco as I was doing my ablutions before ushering an off-Broadway play.

Wiping out on Slippery Invisible Ice is a perennial wintertime dread. Like my friend, I have suffered my share of spills. It was two years ago that I took a flying leap off a patch of this sneaky vicious foe. It was blanketing a storefront’s wooden ramp on a section of Columbus Avenue that was then undergoing sidewalk repair. If memory serves correct, the song playing inside my head as my feet upended was titled: I Know This is Gonna Hurt and I Hope I Have Enough Good Karma Points That I Don’t Break Anything.

I slammed down hard. My innards seemed to rattle around inside, but I was lucky. Aside from a twinge in my left elbow that faded fast, nothing fractured and my internal organs remained in their proper place. The only bruise I suffered was to my ego. Although New Yorkers are quick to look out for each other, it was a welcome relief that no one saw me lying on the ground in a daze. I got up, and resumed my trek — oblivious to the humiliating two-foot stain of gray sidewalk detritus smearing the back of my black coat.

On a winter’s day three years ago, I witnessed Slippery Invisible Ice practice its special brand of cruelty on a businesswoman approximately my own age, over forty under death. She was walking in front of me down West End Avenue. But while crossing West 73rd Street, she began fighting the losing battle to maintain balance. As she valiantly did the familiar slip and slide dance, her legs buckled. She fell into a heap defeated by that unseen frozen villain.

I hurried to her side half-fearing that I might lose my footing in the slush carpeting the sidewalk, belly flop onto my stomach, and speed-ram my head into hers. Fortunately the other half of me that was fearlessly fleet of foot raced to her rescue with the agility of an Olympic Gold Medalist in Snowy Sidewalk Navigation. I offered her my hand and helped hoist her back onto her feet.

Me: Are you okay or just embarrassed?

She sighed, that familiar sigh of someone just bitch-slapped by Mother Nature.

After I suffered my memorable tumble on Columbus Avenue, I invested in a pair of winter boots with solid traction from the Ugly Style Great Price collection.  I was wearing motorcycle boots that freezing night when I took my flying leap. After reading Coco’s text I’m considering wearing my snow shoes every day until spring, unless the fashion police issues me a terrible taste in footwear citation first. I love living in New York City, but I’d also love to avoid leaving another full body imprint in the pavement this winter.