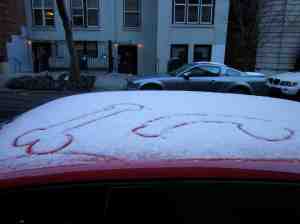 When I woke Tuesday morning I looked out the window and witnessed the first softly falling snow of the season. Ultimately, less than two inches fell in the city and most of it had melted by day’s end, but apparently it still set a record for a December 10th snowfall. Over the course of the months ahead I imagine that there will be plenty more of it to come. Unlike rain, snow does not make a racket, aside from the familiar sound of shovels scraping it off the sidewalk and maybe the occasional thud of some unlucky sap keeling over from a heart attack. Snow falls gracefully even in New York City. Then, it hardens and gets covered in soot and dog pee. The process of Big Apple snow losing its virginity generally happens at warp speed.

This particular Tuesday morning I realized that this month is the 31st anniversary between snow and me. Back in December 1982, I experienced my first snowfall in New York City. Coming from San Francisco, where the weather is usually moderate, I was thrilled to savor my first taste of East Coast-style winter. Maybe it was even a little magical. 31 years later I can honestly say the magic of snow for me is dead, buried and thoroughly decomposed. In fact, my relationship with snow instantly shed its luster on February 11, 1983 when New York got smacked with the Megalopolitan Snowstorm and was buried under 17.6” of it. Even though snow can be very pretty to look at it, it can be a hassle getting around in it.

My first winter out here I was such a cold weather novice. I did not have an adequate coat or boots. So I froze my ass off. The next winter I wised up, and invested in appropriate footwear. I also purchased an enormous down coat that could have served double duty as a sleeping bag or a shelter in the Arctic.

About twenty years ago, on a frigid winter’s day, I was trudging up the slushy Upper Broadway sidewalk in the midst of a crowd. Shoveled mounds of frozen snow were piled three feet high at the curb. An Irritating Hotdog riding a low rider bike, that type of bike with the big handlebars and banana seat, was behind the pedestrians impatiently barking:

The throng was thick and the going was slow. It was pure idiocy trying to ride a bike on the sidewalk, especially in those conditions. Fed up with being trapped behind the wall of foot traffic, Irritating Hotdog had a light bulb. He accessed his inner Evel Knievel and decided to jump his bike over the hills of ice looming large at the curb. Unfortunately for him he failed to clear the hurdle. He went flying off his bike. Its once round front wheel was unnaturally twisted at about a 45-degree angle rendering it impossible to ride. The frame might have been banged up, too. Possibly, he totaled his bike. Back to the star attraction, I can still see him airborne. I had stopped, as did others, allowing him space to smack down hard on the pavement in front of us. A fountain of compassion, I gushed:

Me: Good one, asshole.

Even though his clock was cleaned, he got back up on his feet looking looking a tad sheepish. It seemed that his biggest bruise was to his ego and if his bike was indeed a goner, his wallet. An elderly woman walking next to me chuckled.