The other night I was walking north on Columbus Avenue. A handsome young hustler dressed 127 times better than me — my rumpled tee shirt with a dried Liquid Nails stain on the sleeve magnified that factoid, approached. He declared:

Handsome Young Hustler: You look like a nice person.

Me (thinking): Don’t hit me for money, Sonny.

Handsome Young Hustler: But I just got out of the hospital!

Me: Keep that in mind the next time you go hipster hat shopping.

Earlier that same evening I had an infinitely more pleasant encounter with another sapling on West End Avenue. This one was not of the panhandling variety. It was a freshly planted Hackberry tree that I considered worthy of photographing.

A tree grows in Manhattan.

I restrained myself from snapping any images of the French bulldog evacuating its supper at the tree’s base. Whenever I stop to photograph something, even something as seemingly mundane as this young tree, that’s when people walking along the sidewalk take notice, and punt pups are inspired to heed the call of nature. The dog’s owner did pick up after his relieved beast.

A tree name so lovely it inspires fruit craving and loud throat clearing.

Right now, New York City is in the midst of a project called Million Trees NYC. As the tag declares, this tree is one in a million. Specifically, 220,000 street trees are being planted along with 780,000 others destined for parks and private partners. I think the latter refers to private homeowners who would like to adopt a tree. I would do that myself, but growing a tree in one’s apartment is not an option that this program condones because the people that run it are not mentally defective. 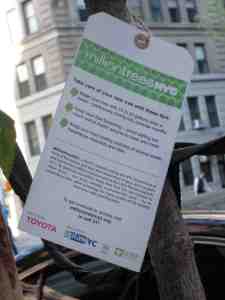 The tree that previously stood where this sapling now stands was knocked down when Hurricane Sandy pummeled the Tri-state area last October. Looking at that tree gave me a warm and fuzzy feeling. I thought:

I returned home compelled to research the Hackberry. My curiosity quickly entered freefall and I landed with a rude thud. Apparently the tree I found so charming is one that’s considered good for almost nothing. An article published on Reporter Herald implies that the Hackberry is about a half step above a Chia pet and its wood is of very low value:

“No one uses hackberry wood to make wine barrels, whiskey casks or fine hardwood furniture. Mostly, people cut down hackberries just to get rid of them. Occasionally, the wood is claimed for crates or pallets; sometimes it gets burned as firewood.”

Apparently, the Hackberry, which is planted all over this fine metropolis, is the tree equivalent to the ubiquitous pigeon — my choice for state bird, should anyone ask. I admit that my areas of expertise, tile labeling and sleeping, often done simultaneously, are a bit of distance from having a clue about botany. In fact, I can barely tell the difference between a redwood and a Douglas Fir even if both uprooted and fell on me simultaneously. I do know that were that to occur, it would hurt significantly.

This sap still likes that sapling very much. If Barbara Walters, who this week gave her year-long notice that she is retiring from network TV in 2014, so she’ll surely be conducting a final few fat fish interviews, decided to ditch her credibility and engage in this exchange with a smelt:

Barbara Walters: If you were a tree, what would you be?

I would proudly declare:

Me: What else but a Hackberry! 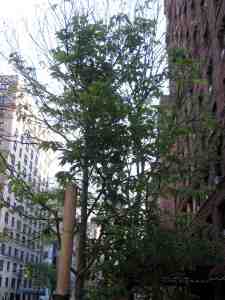 We even resemble each other a bit around the rumpled leaves.

83 responses to “Lame Adventure 375: Sappy Encounter with a Sapling”